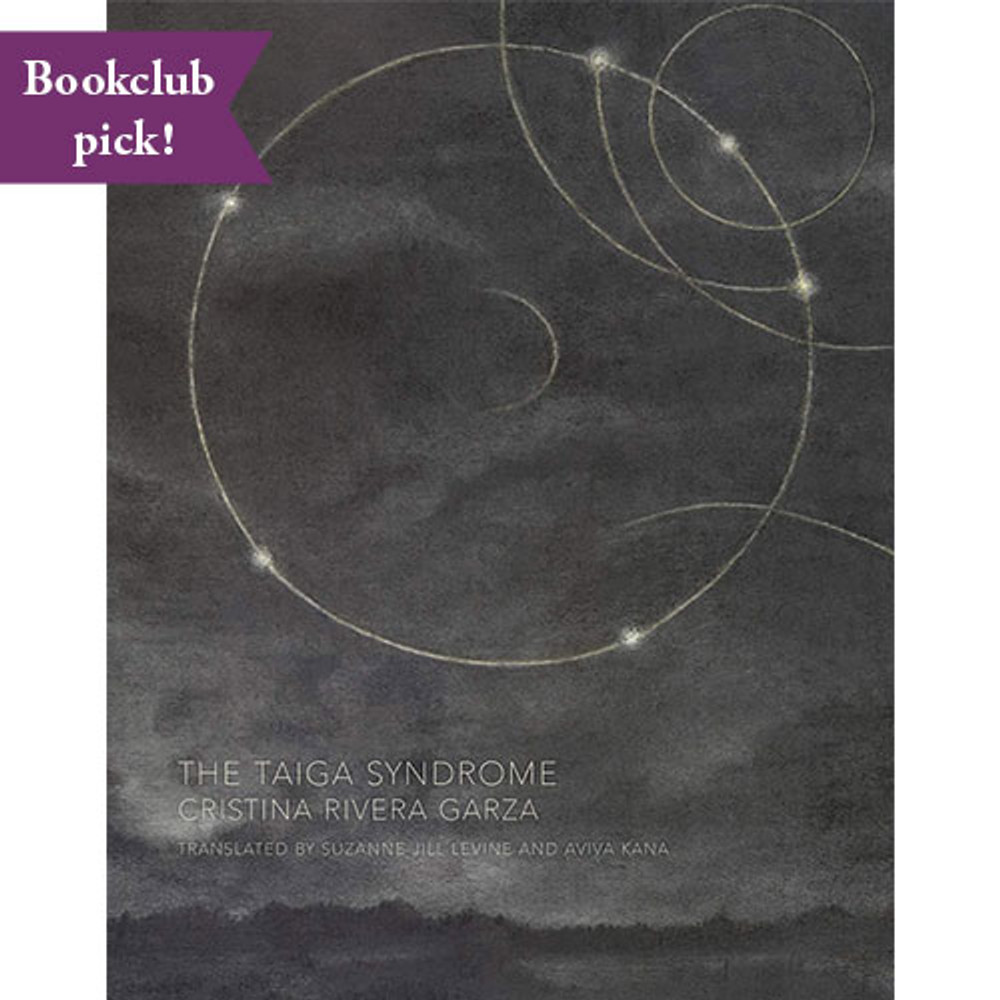 This title is our August 2019 pick for the FEMINIST SCI-FI BOOKCLUB! Find out more here.

Translated from the Spanish by Suzanne Jill Levine and Aviva Kana. A fairy tale run amok, THE TAIGA SYNDROME follows an unnamed female Ex-Detective as she searches for a couple who has fled to the far reaches of the earth. A betrayed husband is convinced by a brief telegram that his second ex-wife wants him to track her down--that she wants to be found. He hires the Ex-Detective, who sets out with a translator into a snowy, hostile forest where strange things happen and translation betrays both sense and one's senses. Tales of Hansel and Gretel and Little Red Riding Hood haunt the Ex-Detective's quest, though the lessons of her journey are more experiential than moral: that just as love can fly away, sometimes unloving flies away as well. That sometimes leaving everything behind is the only thing left to do.

"As lyrical as a poem ('Look at this: your knees. They are used for kneeling upon reality, also for crawling, terrified. You use them to sit on a lotus flower and say goodbye to the immensity') and as fantastic as a fairy tale, Rivera Garza's gorgeous, propulsive novel will haunt readers long after it's finished."—Publishers Weekly, [starred review]

"This insanely creepy & brilliant book by the incomparable Cristina Rivera Garza will keep you awake at night. Garza is a master of atmosphere. A detective novel directed by David Lynch & narrated by Bolaño."—Mark Haber, Brazos Bookstore

"This novel, in a translation by Levine and Kana, is taught, lyrical, and strange, and it fits right in with Dorothy, A Publishing Project's commitment to work that challenges what genres and forms can do. Like the best speculative fiction, it follows the sinuous paths of its own logic but gives the reader plenty of room to play. Fans of fairy tales and detective stories, Kathryn Davis and Idra Novey, will all find something to love. An eerie, slippery gem of a book."—Kirkus Reviews, [starred review]

"Mystery, sci-fi, Socratic dialogue, retelling of 'Hansel and Gretel': The Taiga Syndrome is a delightful shape-shifter of a novel."—Jonathan Woollen, Politics & Prose

"The contemporary Latin American detective novel is a form that uses the individual's rollicking quest as a means of resistance against repressive structures and the violences they engender. Cristina Rivera Garza's The Taiga Syndrome, in this stellar translation by Suzanne Jill Levine and Aviva Kana, gives English-language readers a lyrically luminous take on the genre while not skimping on its adventurous antics. If The Taiga Syndrome is a book of illness, it's also about exile, disappearance, borders, love, language and translation, desire, capitalism and its discontents, fairy tales, and what it means to be possessed by the madness of others and the madness of ourselves. The murmurs that haunt the detective in The Taiga Syndrome evoke the history of Mexican fiction, most notably Juan Rulfo. But this is not a religious state of purgatory. It's more like Apocalypse Now fused with the worlds of Clarice Lispector and Jorge Luis Borges. In other words, there is no one writing novels as phantasmagorically exquisite as Cristina Rivera Garza's. The Taiga Syndrome, which is both quietly poetic and narratively unhinged, is a crucial addition to her distinguished oeuvre."—Daniel Borzutzky

"[A]n explosive writer yet to be fully accounted for in English."—Lina Meruane

"Cristina Rivera Garza does not respect what is expected of a writer, of a novel, of language. She is an agitator."—Yuri Herrera

Cristina Rivera Garza is the award-winning author of numerous works of poetry, fiction, and nonfiction. Her writing has been translated into English, French, Portuguese, Korean, etc. Born in Mexico in 1964, she has lived in the United States since 1989. She is Distinguished Professor in Hispanic Studies and Director of Creative Writing at the University of Houston.