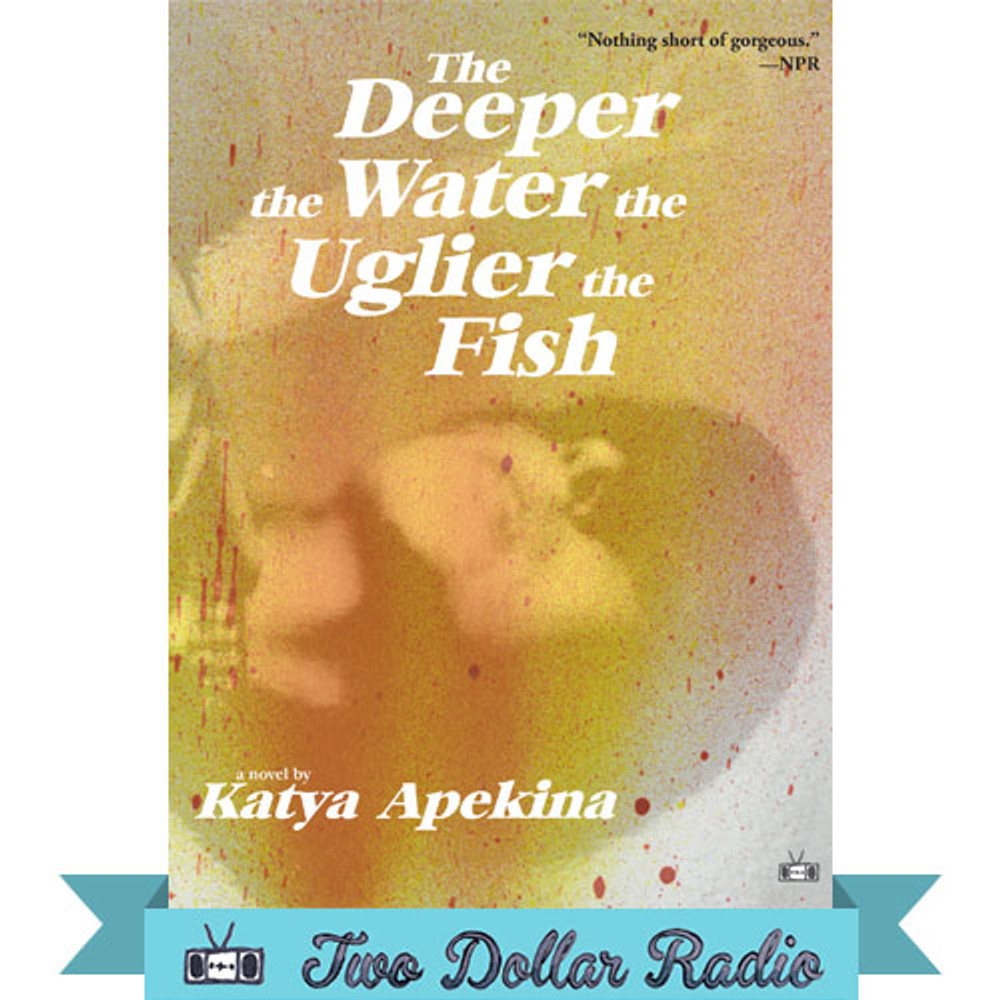 Deeper the Water the Uglier the Fish

It’s 16-year-old Edie who finds their mother Marianne dangling in the living room from an old jump rope, puddle of urine on the floor, barely alive. Upstairs, 14-year-old Mae had fallen into one of her trances, often a result of feeling too closely attuned to her mother’s dark moods. After Marianne is unwillingly admitted to a mental hospital, Edie and Mae are forced to move from their childhood home in Louisiana to New York to live with their estranged father, Dennis, a former civil rights activist and literary figure on the other side of success. The girls, grieving and homesick, are at first wary of their father’s affection, but soon Mae and Edie’s close relationship begins to fall apart―Edie remains fiercely loyal to Marianne, convinced that Dennis is responsible for her mother’s downfall, while Mae, suffocated by her striking resemblances to her mother, feels pulled toward their father. The girls move in increasingly opposing and destructive directions as they struggle to cope with outsized pain, and as the history of Dennis and Marianne’s romantic past clicks into focus, the family fractures further.

Moving through a selection of first-person accounts and written with a sinister sense of humor, THE DEEPER THE WATER THE UGLIER THE FISH powerfully captures the quiet torment of two sisters craving the attention of a parent they can’t, and shouldn’t, have to themselves. In this captivating debut, Katya Apekina disquietingly crooks the lines between fact and fantasy, between escape and freedom, and between love and obsession.

"The Deeper the Water the Uglier the Fish is brilliantly structured, with multiple characters narrating the events of the novel. It's an unusual technique that Apekina uses to stunning effect, creating a kind of narrative tension that propels the novel forward... The structure, characters and storyline are all refreshingly original, and the writing is nothing short of gorgeous. It's a stunningly accomplished book, and Apekina isn't afraid to grab her readers by the hand and take them to some very dark and very beautiful places."
―Michael Schaub, NPR

"It had been a minute since I sat down to read a new novel and found myself completely bowled over by it, swamped in it, enchanted with it... I read the whole thing in one evening, staying up late by the light of my bedside lamp to savor the last pages... Told by an ensemble of narrators and letters, The Deeper the Water the Uglier the Fish delicately unravels layers of family trauma and deeply entrenched injustice."
―Claire Fallon, HuffPost

“The Deeper the Water the Uglier the Fish is a dark, brilliant tapestry... A stunning and feverishly readable debut, it is destined to send the most easy-going of readers spiraling into a book hangover."
―Lauren Dostal, Split Lip Magazine

"This is one of those books that will ruin the fate of whatever's next on your to-be-read pile. The structure, well drawn characters, style and writing (oh the writing!) combine to make this a singular reading experience you'll want to hold onto long after the you've turned the last page. Telling the story through the eyes of multiple narrators creates a pastiche of voices that give it a fevered momentum, holding the reader like grim death throughout. Good luck attempting not to read this in one sitting."
―The Book Table's Best Books of 2018, Javier's Book of the Year, Oak Park, IL

"Gender and power dynamics spasm and ripple out of control in the most intimate spaces and, simultaneously, in a broader American context, framed by the 1960s student movements and the New York art scene of the 1990s."
―City Lights Booksellers, recommended by Ivy

"[The Deeper the Water the Uglier the Fish] has a complex and ambitious structure, a whirl of first-person accounts..."
―Marion Winik, National Book Critics Circle board member

"I really enjoyed this book. This is one of those books that I missed when I wasn't reading it... It's been a long time since I've liked a book this much." (5 out of 5 stars)
―Vonnie, (Episode 115) 3 Book Girls Podcast

“Sharp... Apekina adroitly employs the perspectives of a wide range of characters to expose complicated dynamics that propel this novel with a keen sense of urgency."
―The National Book Review

"Mental illness and the breakdown of relationships lie at the heart of this debut novel.”
―Lauren Hubbard, Harper's BAZAAR 'The Best New Books to Read This September'

“Apekina’s inventiveness with structure and sentence marks the book’s every page, and the result is a propulsive and electrifying look at how family―and art―can both break people and put them back together again. A dark and unforgettable first book.”
―Kirkus Reviews, starred review

"After Edie and Mae’s mother attempts suicide, the girls are sent from Louisiana to their estranged novelist father’s home in New York, lighting the spark for his new masterpiece and the family’s total destruction."
―Vulture 'New Books to Read This Fall'

"A story about love and ownership, connection and obsession, this debut novel dives deep into family dynamics."
―Maddy Foley, Bustle '11 Most Anticipated Books Published By Indie Presses To Have On Your Radar In 2018'

"With The Deeper the Water the Uglier the Fish, Apekina establishes herself as a formidable voice in fiction ― a writer to keep on your radar."
―BuzzFeed News 'These Are The Best Books Of Fall 2018'

"Apekina’s debut novel plays with tricky family relationships and the way fact and fantasy, loyalty and obsession, can be so difficult to tease apart."
―The Millions 'Most Anticipated: The Great Second-Half 2018 Book Preview'

"A hip, little book, told in engaging voice-driven prose. No other novel made me laugh as hard this year as Apekina's."
―Joshua Mohr, LitReactor 'Best Books of 2018'

"The Deeper the Water the Uglier the Fish exposes more than the inner workings of parent-child relationships and the darker shades of mental illness, it digs into pressing themes of today's political climate and the gendering of society."
―Tessa Rose, The Michigan Daily

“The father character, a maniacally selfish writer, made me cringe, to put it lightly!”
―Ottessa Moshfegh in GQ, author of My Year of Rest and Relaxation

"Told polyphonically by an ensemble cast of characters, The Deeper the Water the Uglier the Fish explores the vast disparities between separate perspectives and the moral implications of the artist/muse relationship. [Bookseller] Katharine was captivated by this accomplished debut."
―Unabridged Bookstore, Chicago, 'NEWS AND RECOMMENDATIONS FOR SEPTEMBER 2018'

"The dysfunctional family drama has been done and again but not like this. Katya Apekina's debut novel, The Deeper the Water the Uglier the Fish is a stunning tour de force that tells the story of sisters Edith and Mae, who in the aftermath of their mother's suicide attempt are sent to live with their absentee father, a famed novelist, in New York. From there, personal histories intertwine with the present dropping hints and clues that build up to a torrential climax. The deeper it goes, the uglier it gets."
―Steve Shonder, Anderson's Bookshop La Grange

"Katya Apekina is a writer of great intelligence, both intellectual and emotional; the evidence of which is abundantly clear in her powerful debut novel, The Deeper the Water the Uglier the Fish.”
―Zachary Lazar, author of Sway and I Pity the Poor Immigrant

“The Deeper the Water the Uglier the Fish begins with a reunion between two sisters and their estranged artist father. An unlikely intimacy grows out of this unusual situation, and we're shuttled into a strange, beautiful history of this complex, passionate family, a history which involves young love, the Civil Rights movement, and an enduring obsession. I was completely mesmerized by Katya Apekina’s thrilling, heartfelt debut. Funny, suspenseful, touching, and totally unexpected, I dare you not to love it as much as I did. Apekina has talent and heart to spare.”
―Anton DiSclafani, National Bestselling author of The Yonahlossee Riding Camp for Girls

“The Deeper the Water the Uglier the Fish is an engrossing debut―Apekina’s brilliant story of a family in crisis is a remarkable feat of empathy and insight, guided by unpredictable, propulsive storytelling. I was increasingly and helplessly hooked. I can’t believe this remarkable tour de force is a first novel.”
―J. Ryan Stradal, author of the New York Times Bestseller Kitchens of the Great Midwest

Katya Apekina is the author of the novel The Deeper the Water the Uglier the Fish. She has had stories published in The Iowa Review, Santa Monica Review, West Branch, Joyland, PANK and elsewhere, and has appeared on the Notable List of Best American Nonrequired Reading 2013. She translated poetry and prose for Night Wraps the Sky: Writings by and about Mayakovsky (Farrar, Straus, and Giroux, 2008), which was short-listed for the Best Translated Book Award. She co-wrote the screenplay for the feature film New Orleans, Mon Amour, starring Elisabeth Moss, which premiered at SXSW in 2008. Born in Moscow, she currently lives in Los Angeles.