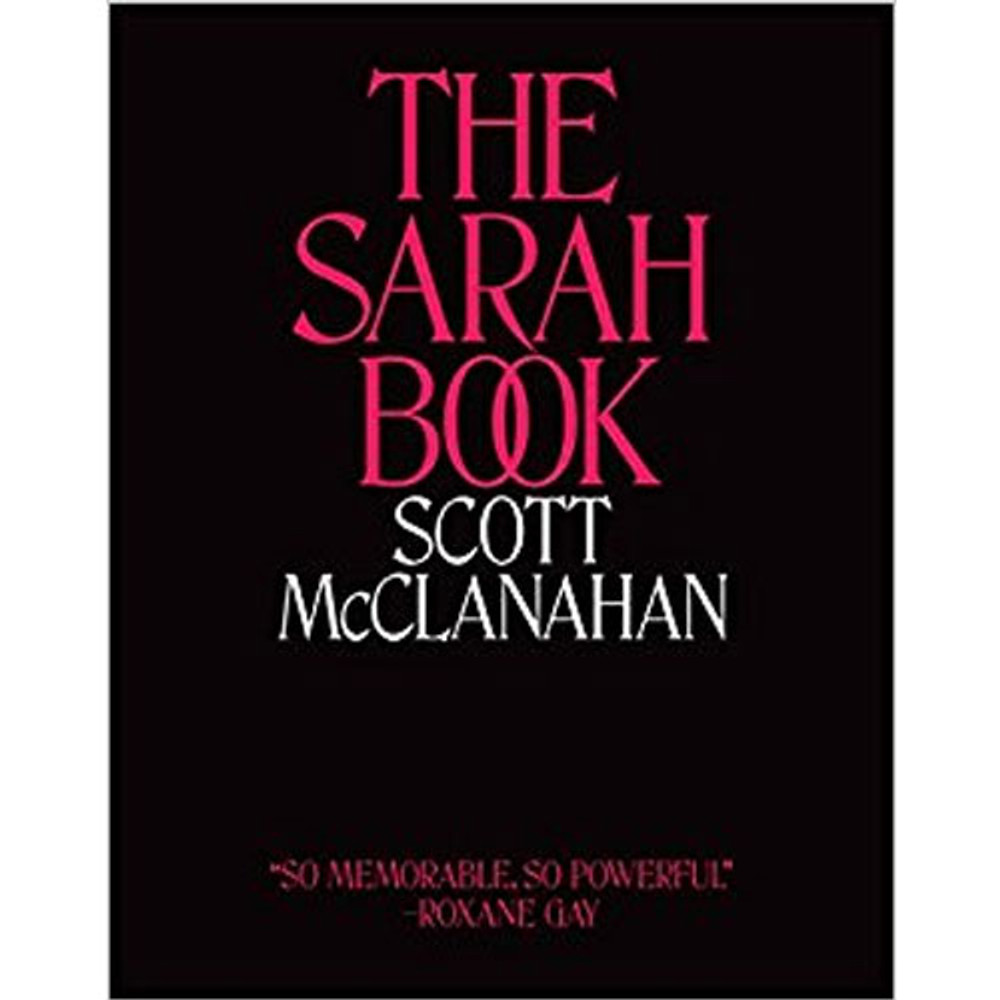 The Sarah Book is Scott McClanahan's continuation of the semi-autobiographical portrait he's been writing over the years about his life in West Virginia. This one is his portrait of love.

"Scott McClanahan's The Sarah Book is a furious exhalation of love and hurt and hate and tenderness and anger. This is a chronicle of a couple coming together and breaking apart. There is courage in these pages because so much of what McClanahan details is ugly and desperate and raw―everything, food, drink, love, heartbreak, to excess. The writing is so intimate you want to reach into the book to save this man from himself but you can't. That impossibility is what makes this book so memorable, so powerful." ―Roxane Gay

"Scott McClanahan's writing is so pure, honest and immediately engaging, it felt like I wasn't just reading prose: it felt like I was reading the prose. THE SARAH BOOK is hilarious, unflinching and deeply sad. Its every chapter, every page, every observation an addictive delight. I read it in one sitting and days later am still stumbling around from its unexpected wallop." ―Maria Semple

The Sarah Book (Tyrant Books, June '17) is indie lit icon Scott McClanahan's semi-autobiographical novel about love and loss in contemporary West Virginia. The Sarah Book is as humorous as it is sad, as tragic as it is hopeful, and as redeeming as it is damned. Through McClanahan’s unique Appalachian vision, we watch a young couple fall in love, begin their life together and then fall apart as the marriage breaks down. The story is told all with the purple mountains and Wal-Marts of modern life in Appalachia as the backdrop. McClanahan weaves the telling of his life through a mix of language akin to the Romantic poets and hick twang that is unforgettable.

"The romance and destruction of a marriage. I couldn't put it down. Written with all the punches left in. McClanahan shows us the dents and scrapes and breakdowns of a man trying to be to a husband and father while at the same time sabotaging the very things he loves. Unnerving but remarkable." ―Willy Vlautin

"Remarkably painful, funny, and grotesque, The Sarah Book offers a particularly American form of abjection. But what's remarkable is less the way McClanahan makes us gawk at this sodden car wreck of a life, but the way in which, despite all the messing up, he manages to touch on something tender and altogether human." ―Brian Evenson

"McClanahan writes as if he might be the illegitimate literary offspring produced from an accidental coupling of Flannery O'Connor and Harry Crews after a long night of bourbon drinking and something going awry during the birth." ―3:AM

Scott McClanahan writes like Walt Whitman and Barry Hannah had a love child who grew up addicted to speed and porn and The History Channel. I've never read anything with so much wide-armed, grief-stricken love inside descriptions of strip clubs and drug deals and excrement and road kill and drunkenness and child neglect. I feel like there's almost no way to describe the book, it's so packed―like McClanahan flung his arms open and gathered all the objects and people and emotions in his world, then compressed them into three-hundred thousand tiny quivering black marks, each one ready to explode with the slightest touch. I can't come up with a single adjective to capture the multiplicity of emotions I experienced as a reader, so I'll just say that The Sarah Book is a crazy heartbreaking surprising sad delicious desperate horrifying hilarious ride." ―Jamie Quatro

The Sarah Book is the saddest song you've ever heard. It's the last sip of whiskey from a bottle that's been kicking around for too long. It's a mixed-up story of a great romance gone awry, told in Scott McClanahan's distinctive voice. The main characters are true love, paranoia, the devil, and God. It's set in parking lots and strip clubs and in shopping malls. It's fiction and it's memoir and it's also neither of those things. It's a hell of a read. ―The Fader

Scott McClanahan is the author of Hill William, Crapalachia, The Incantations of Daniel Johnson and many more.