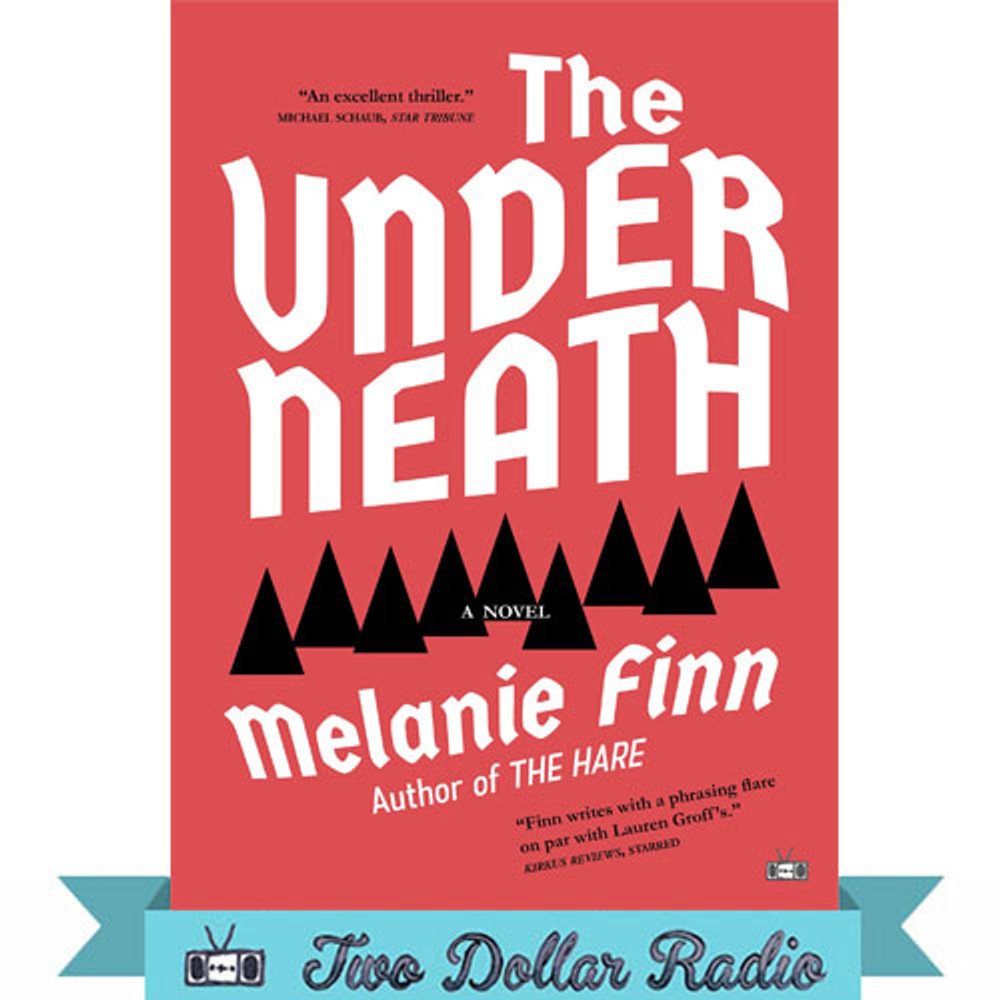 View the hardcover edition of The Underneath by Melanie Finn here. With the assurance and grace of her acclaimed novels The Hare and The Gloaming—which earned her comparisons to Patricia Highsmith and Lauren Groff—Melanie Finn returns with a precisely layered and tense new literary thriller.

The Underneath follows Kay Ward, a former journalist struggling with the constraints of motherhood. Along with her husband and two children, she rents a quaint Vermont farmhouse for the summer. The idea is to disconnect from their work-based lifestyle—that had her doggedly pursuing a genocidal leader of child soldiers known as General Christmas, even through Kay's pregnancy and the birth of their second child—in an effort to repair their shaky marriage.

It isn't long before Kay's husband is called away and she discovers a mysterious crawlspace in the rental with unsettling writing etched into the wall. Alongside some of the house's other curiosities and local sleuthing, Kay is led to believe that something terrible may have happened to the home's owners.

Kay's investigation leads her to a local logger, Ben Comeau, a man beset with his own complicated and violent past. A product of the foster system and life-long resident of the Northeast Kingdom, Ben struggles to overcome his situation, and to help an abused child whose addict mother is too incapacitated to care about the boy's plight.

The Underneath is an intelligent and considerate exploration of violence—both personal and social—and whether violence may ever be justified.

"Winter is the perfect season during which to grind your teeth into a snowy powder as you tear through a menacing thriller set in rural Vermont. Kay is a former war correspondent who retreats to a small town with her children to chill out. The house she rents is fringed with maples and sits on acres of forest; it has poor cellphone service (warning sign No. 1) and a hidden crawl space in one of the bathrooms (warning sign No. 2)... Other topics covered include drug trafficking, adultery and logging. The prose is so dark it’s practically burnt!"
—Molly Young, New York Times, "Read Like the Wind" Dec 4, 2021

"Finn does an excellent job of keeping the reader guessing, and the tension in the narrative always comes across as organic, never manipulative. The Underneath is an excellent thriller, and Finn has a gift for prose that's hard-boiled but not clichéd. Perhaps most important, her characters are true to life... There's much to admire about The Underneath, and Finn's third novel proves that she's deeply original, a writer who's not content with rehashing old tropes that have become overly familiar in some thrillers."
—Michael Schaub, Star Tribune

"One of the best novels I've read in recent memory."
—Mitch Wertlieb, Vermont Public Radio, 'Year In Review: VPR News Staff Share The Stories That Stuck With Them In 2018'

"A musk of sex and menace soaks three narrative strands, expertly braided... Finn writes with a phrasing flare on par with Lauren Goff’s... Her curiosity and dread drive the novel and move her toward a terrifying denouement... Finn puts her readers on the knife’s edge."
—Kirkus Reviews, starred

The Underneath delves into the dark side of the Northeast Kingdom."
—Vermont Public Radio, listen to the full interview

"The follow up to Finn's smash hit, The Gloaming, The Underneath is a thriller you probably shouldn't read if you live, uh, alone. Kay Ward, a former war journalist, attempts to settle into a calmer life out in the wilds of Vermont. But when her husband is called away on business and she discovers a crawl space underneath their home, Kay becomes worried that something, something horrible, happened to the previous tenants."
—Bustle, '13 Books From Indie Publishers To Look Forward To In 2018'

"[The Underneath] offers glimpses of redemption, hope, and at every turn, natural beauty... a gripping, detailed, satisfying read, a hard, unsparing look at human nature."
—Katharine Coldiron, sinkhole mag

"The Underneath is an extraordinary and challenging book, and one that I could not put down."
—Lizzie, Promoting Crime Fiction

"Finn has written a fine piece of fiction. It will make you concerned, worried, and anxious, but we read at least in part to escape our everyday world. Once you step into Finn's Northeast Kingdom, a return trip to your daily and predictable life looks pretty attractive. The tension upon re-opening this book each time is one of the beauties of reading, so read Finn and enjoy."
—Michael F. Epstein, Bennington Banner

"Filled with the terror of everyday violence, this is a mystery in the making. It’s filled with bits and pieces of the lives of a variety of characters, all thrown together in this stew of a story. From journalistic realities to motherhood and the day-to-dayness of life, we’re led on a journey into the life of Kay Ward who’s soon to learn that the house she is calling home may have had a violent past that can’t be ignored. But is it gone?"
—Linda at Auntie's Books, Spokane, WA

"The minute you open this book, you will be sucked into a liminal space, one that is usually only accessible in the small dark hours of the morning, when the world is asleep and the only light comes from the television shining bluish on the wall. It opens with Kay Ward: increasingly estranged from her husband and children and on the edge of something, she doesn't know what. When she discovers a crawlspace in the isolated farmhouse her family is renting, she keeps it to herself. It's a secret she nurses until she decides to investigate, but her questions have consequences and propel her into the path of people she'd be better off without. Finn's newest is strange and compelling, a haunting reminder that it's not just the violence on the surface we need fear, it's what's underneath."
—Lauren Peugh at Powell's Books, Portland, OR

"Finn’s tense and atmospheric novel (following The Gloaming) flashes back and forth between two periods in the life of journalist Kay Ward... Finn’s dark and gripping meditation depicts how violence can warp a person’s character, and whether, having experienced it, there is any coming back."
—Publishers Weekly

"Taking its cue from Finn’s own preoccupations with motherhood and social ills, The Underneath deals with tragedy and its rippling aftermath, and excavates the hows and whys of the pain we inflict on each other... Finn vividly captures the ugliness of opioid addiction and its profound impact on children."
—EmmaJean Holley, Valley News

Melanie Finn, author of Away From You (2004), The Gloaming (2016), The Underneath (2018), and The Hare (2021), was born and raised in Kenya and the US. The Gloaming was a New York Times Notable Book of 2016, a finalist for the Vermont Book Award and The Guardian’s “Not the Booker” Prize. The writer and producer of the DisneyNature wildlife epic Crimson Wing: Mystery of the Flamingos, she is also the co-founder and director of the Tanzanian-based charity Natron Healthcare. She and her family live on a remote hill in the Northeast Kingdom of Vermont.

Enjoy a sneak peek of select pages from The Underneath! (Use the "full screen" option at bottom right to enlarge the pages):

Printed in Canada by Friesens, with the following environmental statement: Goodreads Reviews for The Underneath

Things We Didn't Talk About When I Was a Girl - paperback

All About Love: New Visions