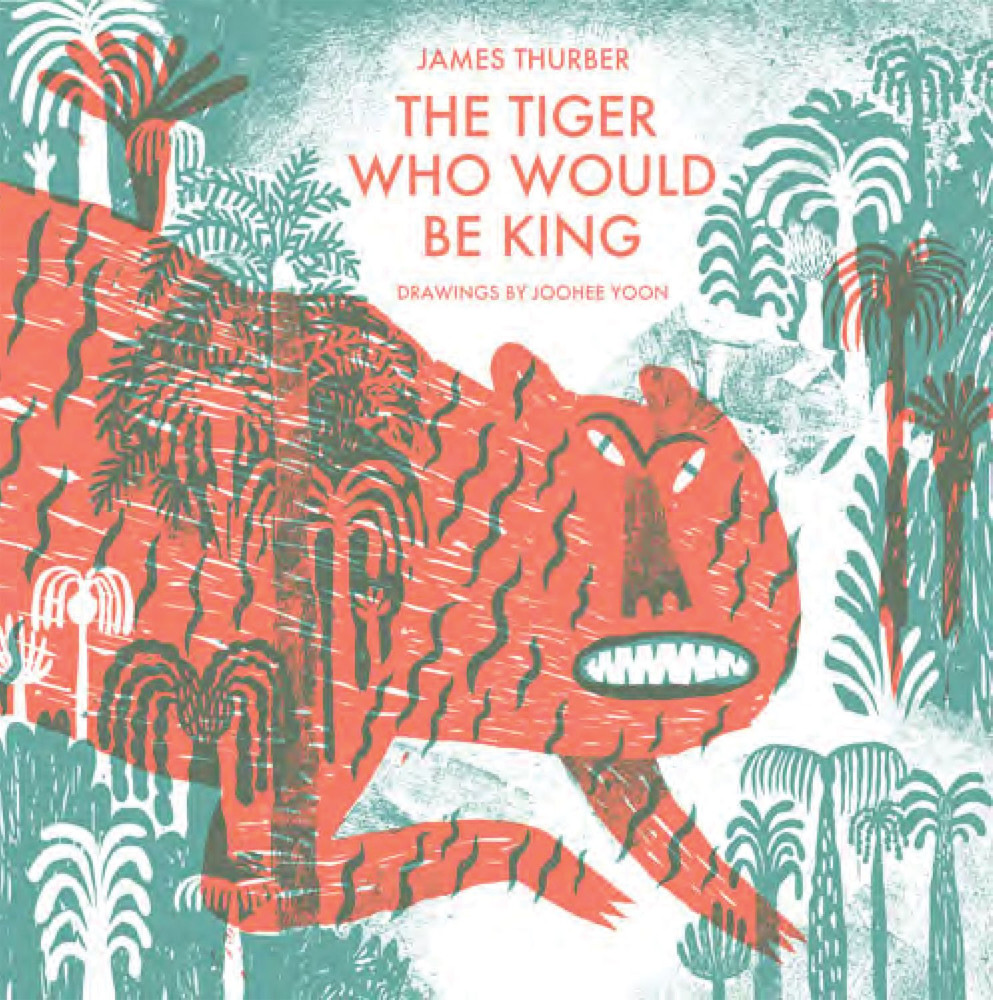 Tiger Who Would Be King

Gorgeously illustrated and including two gatefolds that give us a panoramic jungle at war, The Tiger Who Would Be King is as entertaining as it is wise, as wry as it is passionate. Yoon's humorous images support this beautifully written text with wit and insight. Her final portrait of the tiger in a sea of silence will stay with the reader for a long, long time.

A Huffington Post Honorable Mention in "Best Dark/Mysterious" Category for 2015.

"The illustrations constitute a wholly serious piece of artwork, one that may remind older readers of Picasso's Guernica." -- Publishers Weekly

"Newly illustrated in extravagant, inventive fashion by JooHee Yoon, its lessons seem sharply relevant today. [...] Yoon’s arresting palette adds visual depth to the drama....“The Tiger Who Would Be King” should be reserved for sophisticated children and for adults, too, who are looking for moral clarity in the face of grim news."--The Boston Globe

“Thurber’s profound story is brought to vivid life in this new picture book version . . . Yoon takes the words of Thurber and creates a picture book that is startling and incredible. She captures in expressions, the pride of declaring yourself to be a ruler, the shock of the old ruler being challenged.” – Waking Brain Cells

“A cautionary tale about the futility of war by the late American humorist receives a stunning visual interpretation from Yoon . . . A picture book that will be embraced due to its successful handling of difficult themes.” – STARRED REVIEW, Kirkus Reviews

"...vibrantly illustrated by Yoon in a dense, blocky print style, all in an electric red, a cool blue-green, black and white. Each page teems with evocative images of animal life. The effect is ferocious and ravishing, capturing the beastliness of war along with emotions that include pride, boredom, shock and sorrow." -- The New York Times Book Review

JooHee Yoon is an illustrator and printmaker committed to the art of bookmaking. She enjoys combining illustration with design whenever possible and using both traditional and industrial printing techniques for her projects. Rather than a single approach, she tries to match the tone of each project. She strives to create picture books that work on many levels and can be enjoyed by people of all ages.


Humorist, James Thurber (Dec. 8, 1894 – Nov. 2, 1961), joined the staff of The New Yorker in 1927. His contributions to that magazine, both as a writer and an artist, were instrumental in changing the character of American humor. His stories and cartoons have been collected in over thirty volumes and there have been adaptations for the stage, television, movies, and musical presentations.

People Who Watched Her Pass By

The Woman Who Killed the Fish