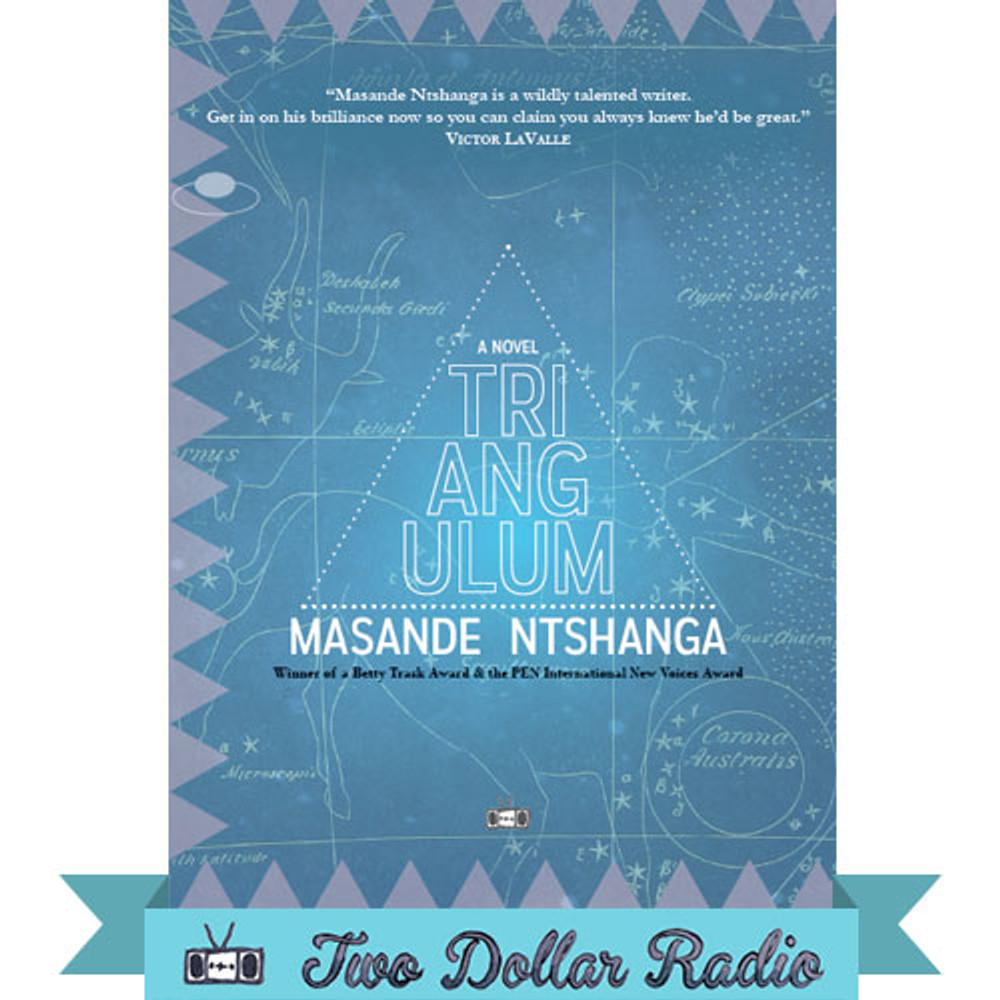 Triangulum is an ambitious, often philosophical and genre-bending novel that covers a period of over 40 years in South Africa’s recent past and near future―starting from the collapse of the apartheid homeland system in the early 1990s, to the economic corrosion of the 2010s, and on to the looming, large-scale ecological disasters of the 2040s.

In 2040, the South African National Space Agency receives a mysterious package containing a memoir and a set of digital recordings from an unnamed woman who claims the world will end in ten years. Assigned to the case, Dr. Naomi Buthelezi, a retired professor and science-fiction writer, is hired to investigate the veracity of the materials, and whether or not the woman's claim to have heard from a “force more powerful than humankind” is genuine.

Thus begins TRIANGULUM, a found manuscript composed of the mysterious woman’s memoir and her recordings. Haunted by visions of a mysterious machine, the narrator is a seemingly adrift 17-year-old girl, whose sick father never recovered from the shock of losing his wife. She struggles to navigate school, sexual experimentation, and friendship across racial barriers in post-apartheid South Africa.

When three girls go missing from their town, on her mother's birthday, the narrator is convinced that it has something to do with "the machine" and how her mother also went missing in the '90s. Along with her friends, Litha and Part, she discovers a puzzling book on UFOs at the library, the references and similarities in which lead the friends to believe that the text holds clues to the narrators’s mother's abduction. Drawing upon suggestions in the text, she and her friends set out on an epic journey that takes them from their small town to an underground lab, a criminal network, and finally, a mysterious, dense forest, in search of clues as to what happened to the narrator's mother.

With extraordinary aplomb and breathtaking prose, Ntshanga has crafted an inventive and marvelous artistic accomplishment.

Read an excerpt of the novel here (from the South African edition, Umuzi press):
The Johannesburg Review of Books, June 3, 2019

A "Most Anticipated Book of 2019" ―Big Other, Cosmopolitan, Sunday Times (South Africa)

"Magnificently disorienting and meticulously constructed, Triangulum couples an urgent subtext with an unceasing sense of mystery. This is a thought-provoking dream of a novel, situated within thought-provoking contexts both fictional and historical."
—Tobias Carroll, Tor.com

"Triangulum is a fascinating and thoughtful addition to the found-manuscript oeuvre."
—Ian Mond, Locus Magazine

"A warm, human read."
—Gwen Ansell, New Frame, "The future of sci-fi is African: Science fiction by Africans and set on the continent is gaining international recognition as it shows how racist, predatory colonialism makes itself felt in future worlds."

"Masande Ntshanga’s Triangulum is a fearless portrait of life over four decades from apartheid’s collapse to the maws of the corporate machine... One of the most inventive and exciting writers in [South Africa] today."
—Monique Verduyn, BusinessLive

"The violent and fascinating history of South Africa—from colonialism to apartheid, and the recent struggles to come to terms with this past—serves as a rich backdrop for this unsettling, enrapturing novel that brings to mind Roberto Bolano’s 2666... a novel of incredible imagination that gradually unfurls into a wonderfully realized meditation on growing up, heritage, and the effects of technological progress on the world around us."
—Alexander Moran, Booklist

"Spanning roughly fifty years from South Africa’s recent past to its near future, Masande Ntshanga’s sophomore novel, Triangulum, employs an altogether more thoughtful melding of historical and sci-fi colonial narratives. Following the life of an anonymous narrator, we inhabit not a country that has enjoyed a conclusive, triumphant end of apartheid, but rather one still plagued by alien rule which mutates, subtly and insidiously, beyond recognition."
—Matt Loreti, Cleveland Review of Books

"This quirky, futuristic novel skirts the boundary of science fiction... Ntshanga writes convincingly from the viewpoint of his narrator as she advances into adulthood. Her struggles to make sense of the strangeness and unpredictability of her world and experiences make this a stirring coming-of-age story."
—Publishers Weekly

"Masande has done a phenomenal job of crafting a local sci-fi. The writing is exceptional and he has certainly pushed the envelope with this. A fantastic read."
—People Magazine South Africa

"By time-travelling and genre-bending, Triangulum is able to pack a mean and nuanced punch."
—Zaza Hlalethwa, Mail & Guardian

"Like Frankenstein in Baghdad and Infidel... Ntshanga effectively uses a work of genre fiction to reveal meaning in our own world. Everyday events in a changing twentieth century South Africa and its potential future is used as background to a larger story of our own frail and fallible human nature, written in quietly beautiful language that is poetic, yet conversational and engaging enough to ground its unreal events."
—Terence Taylor, Nightmare (Volume 9: June 2019)

"An unprecedented fusion of science-fiction, mystery, and literary fiction, this book blurs the line between reality and imagination."
—Beth Mowbray, The Nerd Daily

In this modern coming-of-age tale, Masande Nsthanga... takes us on dystopic journey into the most suprising places, and also on a journey into the human soul haunted by the past, revolted by injustice and hungry for freedom."
—Ioana Danaila, The African Book Review

"Ntshanga has written a wonder of speculative fiction, with much to say about oppression, the onward march of technology and corporations, and the fate of the earth in the hands of human civilization. Grounded in a coming-of-age story and compelled by masterfully deployed elements of both history and science fiction, this novel is in a genre all its own. Triangulum is an astonishing puzzle of a book, one that I immediately wanted to reread in order to marvel at all of the interlocking pieces with a sharper eye."
—Kelsey O'Rourke, Literati Bookstore

"I think this was one of the best science fiction epics I've read in a while."
—Jacob Hoefer via Goodreads, bookseller at Labyrinth Books

"Come for the unexpected convergence of Afro-futurism, eco-terrorism, alien abductions, and more. Stay for the unsettling meditations on South Africa’s dystopian past and present, the grandiose yet subversive re-imagining of humanity’s relationship to nature, and the poignant impulse, from which no character is spared, to make aliens of each other and of themselves."
—Mekiya Walters, The Arkansas International

"[Ntshanga's] new novel Triangulum takes on a broader focus, extending into the near future and encompassing currents both historical and apocalyptic. The result promises to be a unique, unexpected juxtaposition of grand ideas and personal turmoil."
—Tobias Carroll, Lit Hub, "11 Books You Should Read This May"

"Want something that is surely in the running for the Best Genre Bending Mind Warp of a Dystopian Novel Not Set in the USA? ... a book that will appeal to people who like guys like Borges and Bolaño."
—Jason Diamond, InsideHook

"With his new novel Triangulum, Masande Ntshanga expands on the scope of his earlier novel The Reactive to tell the story of several decades of South African history, beginning in the recent past and extending on into the near future. Ntshanga’s fiction blends the high-concept and numerous lived-in qualities, and this expansion offers readers an entirely different side of his literary work."
—Vol.1 Brooklyn

"Triangulum... is a mysterious coming-of-age story, a mash-up of science fiction and historical fiction."
—The Johannesburg Review of Books

"This new genre-bending novel with elements of science fiction covers a period of 40 years past and present in South Africa. In 2040, the South African National Space Agency receives a mysterious package containing a memoir and a set of digital recordings from an unnamed woman who claims the world will end in ten years."
—Layla Haidrani, Cosmopolitan, '32 new books by people of colour to get excited about in 2019'

"An inventive novel."
—Jennifer Platt, Sunday Times (South Africa), 'A look at the literature 2019 has in store'

A "Most Anticipated Book of 2019"
—John Madera, Big Other

Masande Ntshanga is the author of the acclaimed novel, The Reactive. He is the winner of the Betty Trask Award (2018), winner of the inaugural PEN International New Voices Award in 2013, and a finalist for the Caine Prize in 2015. He was born in East London in 1986 and graduated with a degree in Film and Media and an Honours degree in English Studies from UCT, where he became a creative writing fellow, completing his Masters in Creative Writing under the Mellon Mays Foundation. He received a Fulbright Award, an NRF Freestanding Masters scholarship, a Civitella Ranieri Fellowship and a Bundanon Trust Award. His work has appeared in The White Review, Chimurenga, VICE and n + 1. He has also written for Rolling Stone magazine.