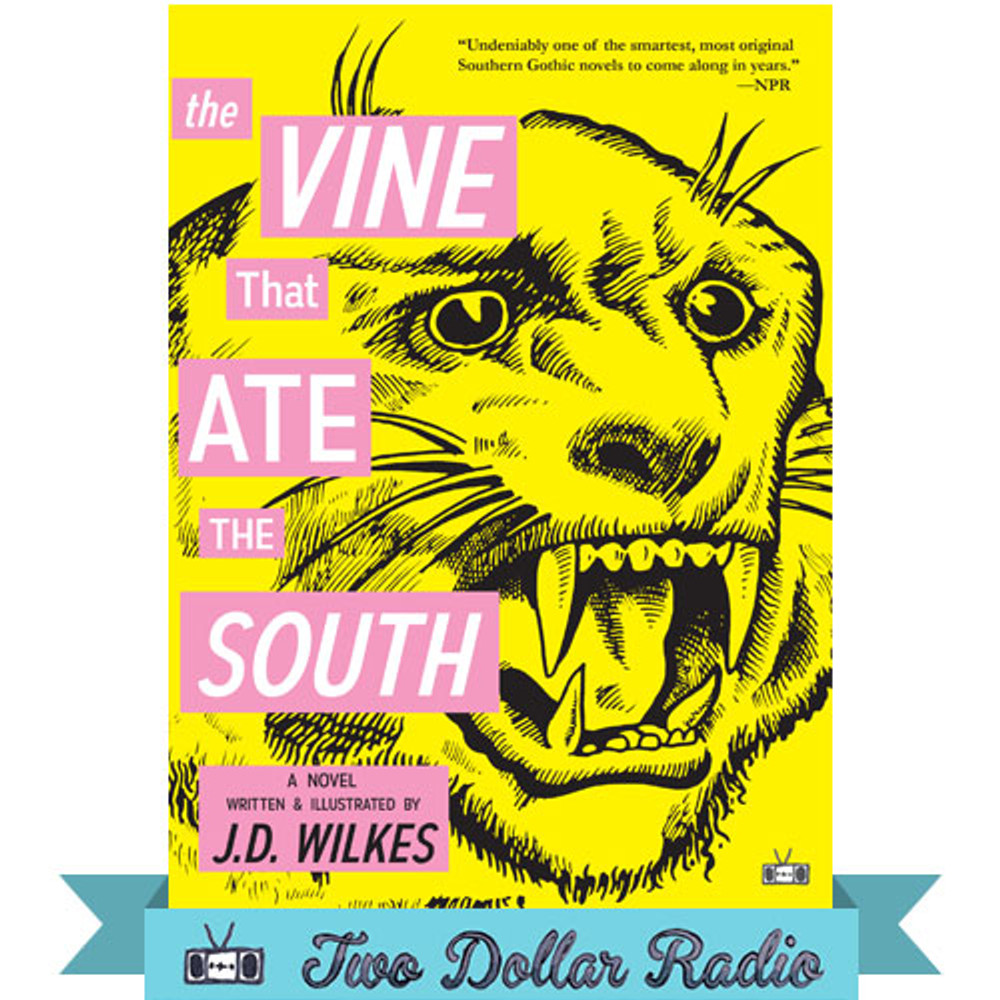 Vine That Ate the South

With the energy, wit, and singularity of vision that have earned him a reputation as a celebrated and charismatic musician, The Vine That Ate the South announces J.D. Wilkes as an accomplished storyteller on a surreal, Homeric voyage that strikes at the very heart of American mythology.

In a forgotten corner of western Kentucky lies a haunted forest referred to locally as "The Deadening," where vampire cults roam wild and time is immaterial. Our protagonist and his accomplice—the one and only, Carver Canute—set out down the Old Spur Line in search of the legendary Kudzu House, where an old couple is purported to have been swallowed whole by a hungry vine. Their quest leads them face to face with albino panthers, Great Dane-riding girls, protective property owners, and just about every American folk-demon ever, while forcing the protagonist to finally take stock of his relationship with his father and the man's mysterious disappearance.

The Vine That Ate the South is a mesmerizing fantasia where Wilkes ambitiously grapples with the contradictions of the contemporary American South while subversively considering how well we know our own family and friends.

"Wilkes' ability to spin a story and craft language that's as inventive and clever as the book's plot combine to create something special that's a bit of a contradiction itself—a book that feels both classic and new, mythic and modern."
—PopMatters

"Chock full of vivid, hallucinatory bits, odd moments of humor, and haunted environments, with the forest itself a classic moody setting... The South comes across as sufficiently haunted: by God, by slavery, and, not least, by the ghosts, literal and figurative, of a region with a very tangled history."
—Electric Literature

"A page-turning delight, rife with Southern folklore. A Homeric odyssey soaked in chewing tobacco, dropped in a pocket pint of moonshine, and best consumed in one long delirious pull."
—East Bay Review

"Wilkes takes the Southern adventure tale to a whole new level. A novel that is sure to be an instant Southern classic."
—Deep South Magazine

"A hell of a book, and it will undoubtedly become part of the list of best, and weirdest, Southern literary gems."
—LitReactor

"[J.D. Wilkes] has a real gift as a storyteller and the potential to become one of America’s great authors."
—Bowling Green Daily News

"Rather than a moonlight-and-magnolias glorification of the South, Wilkes shows just how fearsome it can be—literally and figuratively. The Vine That Ate the South is not only suspenseful, but also uproariously funny. Whether he’s recounting a run-in with a lisping, overly eager pastor or remembering the day his girlfriend-stealing nemesis found his family’s “shit knife,” our protagonist is like that hilarious uncle who always tells the best stories."
—PANK

"I have an announcement to make: There's a new boy in town and his name is J.D. Wilkes. Put away whatever "southern" books or regional "literary" knick-knacks you've been messing with. The Vine that Ate the South is a wild Kentucky vampire of a book and will wash you in the power of the blood. When scholars from the future come to study the crazy country myths of the melungeons and moth man, Daniel Boone and the secret rural heart of our invisible republic—this book will be their Rosetta stone."
—Scott McClanahan

"Wilkes’s sardonic humor and twisting literary explorations of Southern lore are as relentless as the kudzu entwining the story, and more fun than being attacked by revenge-bent ghosts."
—Publishers Weekly

"It's a relentlessly fun novel, the literary equivalent of a country-punk album that grabs you and refuses to let go. Wilkes has a perfect ear for the dialect of Kentucky, and his writing is so bright, you can almost see every abandoned shack, every kudzu-covered tree. Sure, it's bizarre, and at points almost gleefully obscene, but it's undeniably one of the smartest, most original Southern Gothic novels to come along in years."
—NPR

“A sly, rollicking Southern phantasmagoria that finds the sweet spot between tall tale and something more dangerous and psychological. Hilarious, profane, entertaining, and sneakily written. The illustrations are brilliant, too.”
—Jeff VanderMeer

"Kentuckians Hunter S. Thompson and Johnny Depp would be cackling to beat the devil over this brazen tribute to folklore, tradition, and hillbilly rituals. What's fascinating is how Wilkes taps into ancient archetypes to transform everyday characters into phantasmagoric figures by wrapping them in Southern euphemisms, counterintuitive contexts, and florid language more at home in a pulpit. An epic of Wagnerian proportions... Wilkes' debut is a rich and heartfelt yarn that resonates as deeply as his music."
—Kirkus Reviews

"Deep in the Jackson Purchase (of Kentucky), a half-feral hillbilly child was weaned on punk rock, MAD Magazine and underground comix. Wilkes’ art has the charm I love… but with a little more edge and rural crust. (His) underground sensibilities lock in for the long haul; though I expected nothing less than greatness from my brother from ‘The Dark and Bloody Ground’."
—Tony Moore

“I think JD is one of those genius guys who has only been discovered by a smaller audience. But that makes sense, because a broader audience doesn’t really go in for anything different. I love the fact that he’s experimental. He’s a very creative cat.”
—Billy Bob Thornton

“JD convey(s) the dark and twisted underbelly of a country steeped in contradictions.”
—JUXTAPOZ Magazine

Wilkes’s book is chock full of vivid, hallucinatory bits, odd moments of humor, and haunted environments, with the forest itself a classic moody setting, but the book gets its real charge from its complex consideration of the narrator’s views on manhood and the South — the two being intimately related.
—Andrew Schenker, Electric Lit

J.D. Wilkes is an American visual artist, musician, author, filmmaker, and Kentucky Colonel. He is also an avid purveyor of traditional American music and an accomplished musician. But he is perhaps best known as the charismatic frontman for the Legendary Shack Shakers, a band that has been described as a “dynamite group” by author/fan Stephen King, and whose music has been featured on the Grammy-nominated soundtrack for HBO’s TrueBlood. Wilkes is the author of Barn Dances and Jamborees Across Kentucky, an exploration of his state's rich folk music heritage.