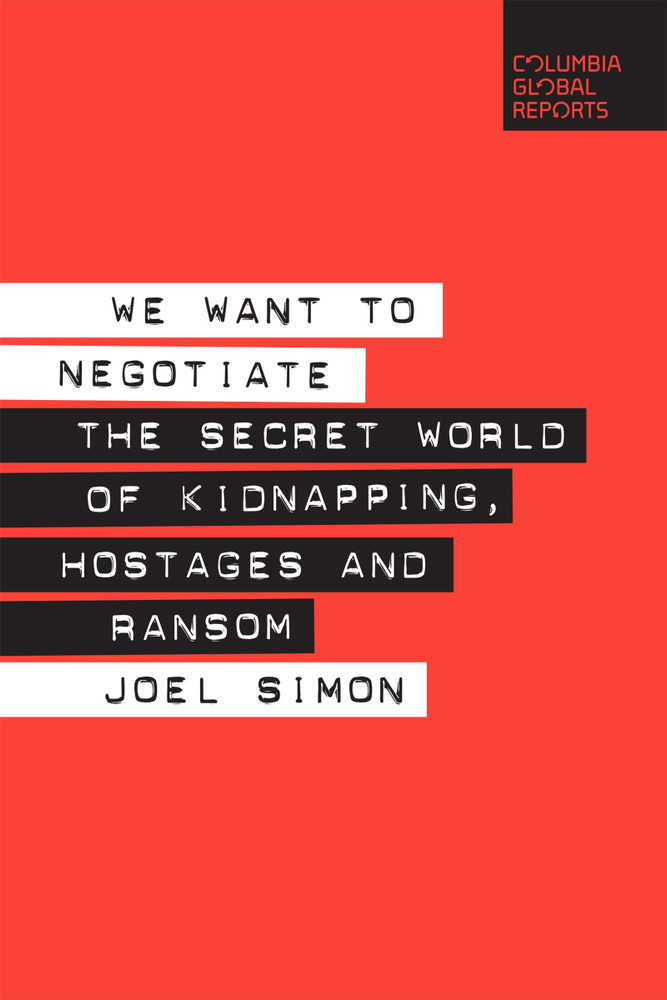 We Want to Negotiate: The Secret World of Kidnapping, Hostages and Ransom

"A wise and thorough investigation." ―Lawrence Wright, author of The Looming Tower and The Terror Years

Starting in late 2012, Westerners working in Syria―journalists and aid workers―began disappearing without a trace. A year later the world learned they had been taken hostage by the Islamic State. Throughout 2014, all the Europeans came home, first the Spanish, then the French, then an Italian, a German, and a Dane. In August 2014, the Islamic State began executing the Americans―including journalists James Foley and Steven Sotloff, followed by the British hostages.

Joel Simon, who in nearly two decades at the Committee to Protect Journalists has worked on dozens of hostages cases, delves into the heated hostage policy debate. The Europeans paid millions of dollars to a terrorist group to free their hostages. The US and the UK refused to do so, arguing that any ransom would be used to fuel terrorism and would make the crime more attractive, increasing the risk to their citizens. We Want to Negotiate is an exploration of the ethical, legal, and strategic considerations of a bedeviling question: Should governments pay ransom to terrorists?

"A firm no-concessions policy that relies on meager evidence is inexcusable, he argues, when lives hang in the balance. We Want to Negotiate is a helpful, accessible contribution to a decades-old dilemma." ―The Wall Street Journal

"This excellent and careful book asks tough questions about whether and how governments should negotiate with kidnappers to get hostages released." ―Foreign Affairs

"As Joel Simon expertly explains in his new book, We Want to Negotiate, there is no consensus about how to respond to an ancient practice that has made a terrible resurgence in the post-9/11 era." ―Jason Rezaian, The Washington Post

"Kidnapping today has taken a more sinister and professional turn, as demonstrated in Joel Simon’s We Want To Negotiate ... kidnapping is in a state of constant flux, endlessly evolving to meet demand." ―Caroline Moorehead, The Times Literary Supplement

"A wise and thorough investigation of the painful conundrum posed by terrorist kidnappings. Simon makes a cogent argument about how to change our current, failed approach to negotiation." ―Lawrence Wright, author of The Looming Tower and The Terror Years

"Joel Simon has written an invaluable insider's account of the how and the why of the shadowy business of ransom negotiation at the highest level. For anyone who has ever wondered why some governments negotiate for the release of their captured citizens, while others―including our own―do not, Simon's book is essential reading. As head of the Committee to Protect Journalists, Simon has seen the hostage crisis up close and this book reflects his intelligence, courage, and clear-eyed approach to this murky but, sadly, thriving business." ―Kati Marton, author, journalist and former Board Chair of the Committee to Protect Journalists

"This is an excellently researched and reasoned book on a terrible and complicated problem―what to do when someone is taken hostage. I hope all those who have had to face this awful dilemma will read it, and especially those who make and carry out government policy." ―Terry Anderson, journalist, hostage in Lebanon for seven years

"Joel Simon's book about the dark world of kidnappers and their hostages is deeply reported, well written and well calibrated in its judgements. For anyone who wants to understand the many difficult questions raised by the kidnapping trade, Simon's book will be the standard." ―Peter Bergen, author of United States of Jihad: Who are America’s Homegrown Terrorists and How Do We Stop Them

"In We Want to Negotiate, Joel Simon combines the breadth of his knowledge alongside stunning narratives to try to understand how the gruesome and murky trade of kidnapping really works. Simon's international policy expertise and his compassion for his subjects―many of whom he knew and worked alongside―shine through to create a spellbinding, chilling and important read." ―Janine di Giovanni, Senior Fellow, the Jackson Institute of Global Affairs, Yale University, and author of The Morning They Came for Us: Dispatches from Syria

"To Simon, who has worked for nearly 20 years at the Committee to Protect Journalists, the question is a matter not just of political will or moral philosophy but also of who lives and who dies.... General readers will find the material enlightening, and those professionally involved will find it essential." ―Publishers Weekly

"A persuasive argument that deserves to be heard in Foggy Bottom, the Pentagon, and other corridors of power." ―Kirkus Reviews

"This readable and well-argued book is essential for ethics, journalism, and international relations collections, and a valuable rubric for assessing hostage policy, whether by governments, individuals, or businesses." ―Library Journal

Joel Simon is the executive director of the Committee to Protect Journalists. He has written widely on media issues, contributing to Slate, The New York Review of Books, The New York Times, Columbia Journalism Review, The Guardian, and The Washington Post. He has led numerous international missions to advance press freedom. His book The New Censorship: Inside the Global Battle for Media Freedom was published by Columbia University Press in 2014. A graduate of Amherst College and Stanford University, he lives in New York City.

We Do This Til We Free Us