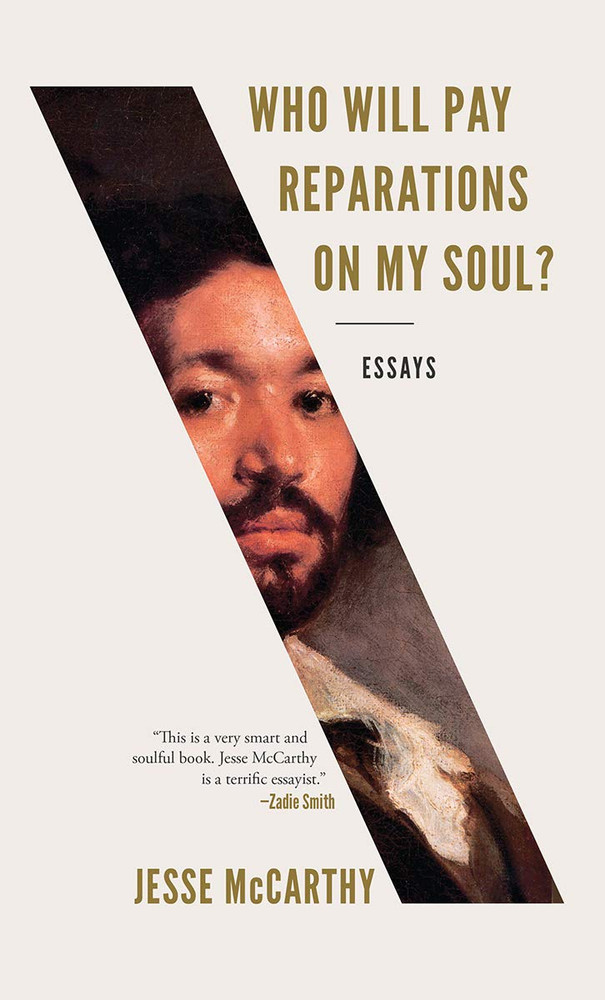 Who Will Pay Reparations on My Soul?

"This is a very smart and soulful book. Jesse McCarthy is a terrific essayist." ―Zadie Smith
New York Times • "New Books to Watch For in March"

A supremely talented young critic’s essays on race and culture, from Toni Morrison to trap, herald the arrival of a major new voice in American letters.

Ranging from Ta-Nehisi Coates’s case for reparations to Toni Morrison’s revolutionary humanism to D’Angelo’s simmering blend of R&B and racial justice, Jesse McCarthy’s bracing essays investigate with virtuosic intensity the art, music, literature, and political stances that have defined the twenty-first century. Even as our world has suffered through successive upheavals, McCarthy contends, “something was happening in the world of culture: a surging and unprecedented visibility at every level of black art making.” Who Will Pay Reparations on My Soul? reckons with this resurgence, arguing for the central role of art and intellectual culture in an age of widening inequality and moral crisis.

McCarthy reinvigorates the essay form as a space not only for argument but for experimental writing that mixes and chops the old ways into new ones. In “Notes on Trap,” he borrows a conceit from Susan Sontag to reveal the social and political significance of trap music, the drug-soaked strain of Southern hip-hop that, as he puts it, is “the funeral music that the Reagan Revolution deserves.” In “Back in the Day,” McCarthy, a black American raised in France, evokes his childhood in Paris through an elegiac account of French rap in the 1990s. In “The Master’s Tools,” the relationship between Spanish painter Diego Velázquez and his acolyte-slave, Juan de Pareja, becomes the lens through which Kehinde Wiley’s paintings are viewed, while “To Make a Poet Black” explores the hidden blackness of Sappho and the erotic power of Phillis Wheatley. Essays on John Edgar Wideman, Claudia Rankine, and Colson Whitehead survey the state of black letters. In his title essay, McCarthy takes on the question of reparations, arguing that true progress will not come until Americans remake their institutions in the service of true equality. As he asks, “What can reparations mean when the damage cannot be accounted for in the only system of accounting that a society recognizes?”

For readers of Teju Cole’s Known and Strange Things and Mark Greif’s Against Everything, McCarthy’s essays portray a brilliant young critic at work, making sense of our disjointed times while seeking to transform our understanding of race and art, identity and representation.

"This is a very smart and soulful book. Jesse McCarthy is a terrific essayist."
― Zadie Smith

"Having grown up in Paris, where he moved with his parents, both journalists, when he was 8, the author bears witness to ‘the Paris of color, of difference’ that marginalizes Black immigrants. The tragic terrorist attacks at Bataclan in 2015, writes McCarthy, communicated ‘a desperate will to power’ by those who believe verbal expression impossible. Urbane, penetrating cultural analysis."
― Kirkus Reviews, starred review

"McCarthy puts himself in conversation with such contemporary figures as Ta-Nehisi Coates [...], and the musician D’Angelo, whose 2014 album Black Messiah McCarthy sees as 'a flash of black hope in the hour of chaos.' The result is an insightful collection as timely as it is original."
― Publishers Weekly

"My vote for the most underrated young critic today goes to this Harvard instructor (and editor at the Chicago literary journal The Point) whose excellent collection of essays on Black aesthetics, from obvious (Toni Morrison) to fleeting (trap music), reads like a landmark."
― Christopher Borrelli, Chicago Tribune, "25 Books We Can't Wait to Read in 2021"

"Jesse McCarthy is an artist of the ear. In the essays collected in Who Will Pay Reparations on My Soul? he shows us how to hear the anguish and strange joy in trap music, the verbal and rhetorical nuances in American political and poetic traditions, and even the minute change in meaning between “black” and “Black.” Out of these sounds and many others, McCarthy’s challenging and startlingly humane essays make a symphony. This is a beautiful and beguiling new voice, tuned perfectly for the troubles and opportunities of our moment. Listen up."
― Vinson Cunningham, New Yorker staff writer

"Jesse McCarthy’s Who Will Pay Reparations on My Soul? signals the rebirth of the golden age of Black cultural criticism. McCarthy is absolutely brilliant and this book is stunning. With an impressive breadth and depth of knowledge, McCarthy moves between popular culture, critical theory, scholarship, media, music, and art deftly and precisely in order to provide a historically informed assessment of our times. McCarthy is a beautiful writer and thinker and the world is better for his wisdom."
― Imani Perry, Hughes-Rogers Professor of African American Studies at Princeton University and author of Breathe: A Letter to My Sons

Jesse McCarthy is assistant professor of English and African American studies at Harvard University. He is an editor at the Point and has written for n+1, Dissent, the Nation, and the New Republic. He lives in Cambridge, Massachusetts.

Vengeance is Mine, All Others Pay Cash