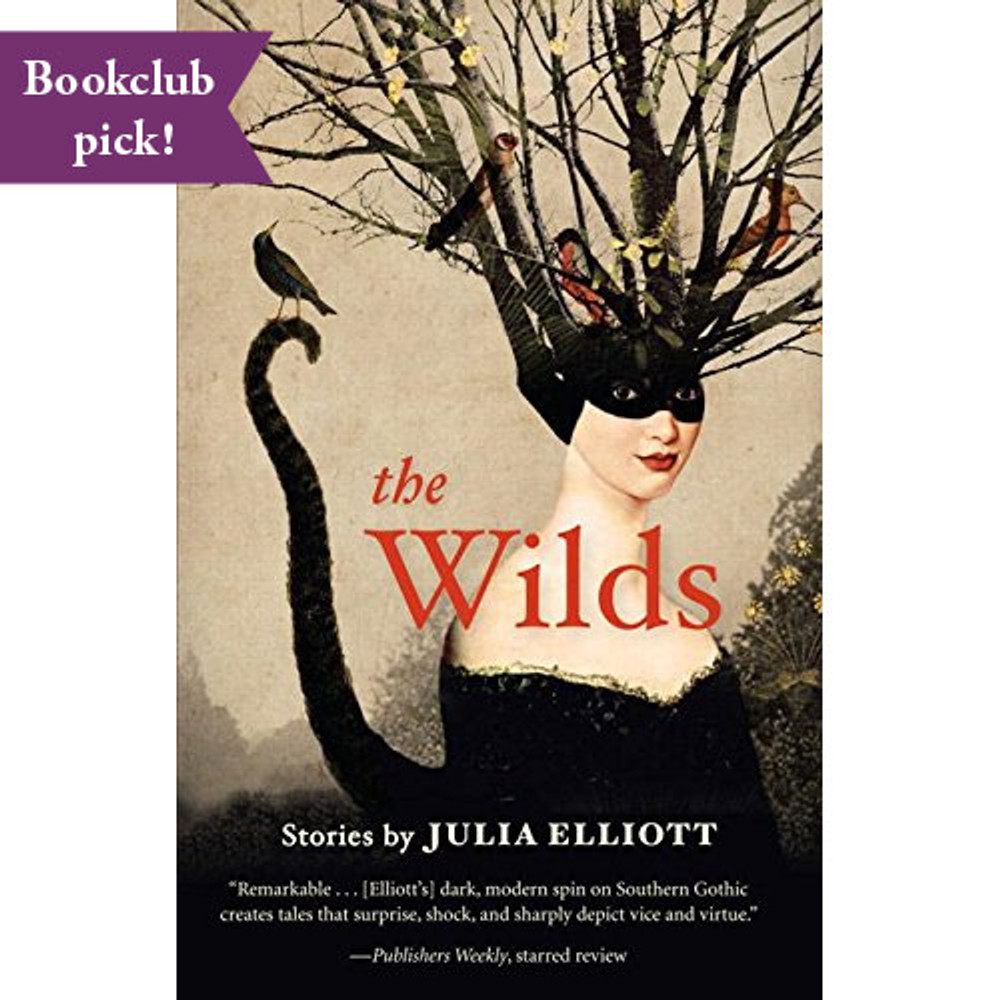 This title is the April 2019 pick for the FEMINIST SCI-FI BOOKCLUB! Find out more here.

Teetering between the ridiculous and the sublime, The Wilds blends Southern gothic strangeness with dystopian absurdities, sci-fi speculations, and fairy-tale transformations.

At an obscure South Carolina nursing home, a lost world reemerges as a disabled elderly woman undergoes newfangled brain-restoration procedures and begins to explore her environment with the assistance of strap-on robot legs. At a deluxe medical spa on a nameless Caribbean island, a middle-aged woman hopes to revitalize her fading youth with grotesque rejuvenating therapies that combine cutting-edge medical technologies with holistic approaches and the pseudo-religious dogma of Zen-infused self-help. And in a rinky-dink mill town, an adolescent girl is unexpectedly inspired by the ravings and miraculous levitation of her fundamentalist friend’s weird grandmother. These are only a few of the scenarios readers encounter in Julia Elliott’s debut collection The Wilds. In her genre-bending stories, Elliott blends Southern gothic strangeness with dystopian absurdities, sci-fi speculations with fairy-tale transformations. Teetering between the ridiculous and the sublime, Elliott’s language-driven fiction uses outlandish tropes to capture poignant moments in her humble characters’ lives. Without abandoning the tenets of classic storytelling, Elliott revels in lush lyricism, dark humor, and experimental play.

"Robots may search for love, but there’s nothing wilder than human nature in this genre-bending short story collection from debut writer Elliott . . . This book will take you to places you never dreamed of going and aren't quite sure you want to stay, but you won't regret the journey."
—Kirkus

"This is wacky, bizarre content, but with a nice dose of realism even in the most absurd points. If you like Karen Russell, this is a good choice for you."
—Book Riot

"[Elliott's] work is unique and haunting, often drifting into apocalyptic and dystopian territory, but in many ways rooted in reality. I could not turn away from her tales. At the end of my time with The Wilds, I was completely devoted to Elliott’s dark depictions of the world.
—The Rumpus

"Elliott’s inventive first collection is replete with robotic limbs and levitation — but also grit and force. A dark piece of magic that glows in the reading."
—Flavorwire

"Often using dystopian and fantasy elements, Elliott’s writing is imaginative, her characters are often strange, and the whole collection is a dark treat you simply can’t put down."
—New Pages

“Readers who grew up loving that fizzy, edge-of-the-lake feeling of diving into a tale will adore Julia Elliott's The Wilds. Elliott's worlds are fully imagined and wholly immersive; her sentences unfurl in the most surprising and glorious ways. These are tantalizingly strange, eerie and funny and unpredictable tales of transformation.”
—Karen Russell, author of Vampires in the Lemon Grove

“Julia Elliott’s magical debut collection, The Wilds, brings together some of the most original, hilarious, and mind-bending stories written in the last two decades. She journeys deep into mythic terrains with an explorer’s courage and a savant’s wit, and the reports she sends back from imagination’s hinterlands are charged with a vernacular that crackles with insight. Angela Carter, Kelly Link, and Karen Russell are similar visionaries in the short story form, but Elliott is very much her own irrepressible voice—and it’s one well worth heeding. The Wilds is simply a milestone achievement.”
—Bradford Morrow, author of The Uninnocent

“Julia Elliott’s stories—which thrive beautifully somewhere between the lyrically haunting works of Barry Hannah and the retrospective works of Lewis Nordan—offer nothing but the great, beautiful, dark regions of the human heart. These are stories to be cherished, taught, and brooded upon. These are stories in which to bathe oneself."
—George Singleton, author of Stray Decorum

“Julia Elliott’s stories are an endangered species—vital, poignant, and rare. Readers should send themselves recklessly into The Wilds, for they will emerge spellbound, all the better for it.”
—Kate Bernheimer, author of How a Mother Weaned Her Girl from Fairy Tales

"The Wilds by Julia Elliott: a very well-written book of short stories that are creepy and weird in the good way. In the title story, a girl wearing a homemade crown of bird skulls tells of getting taken prisoner by a feral pack of boys, known as the Wilds, who live nearby. 'Their chests glowed with firefly juice. They had steak knives strapped to their belts and some of them wore goggles.' How can you go wrong with that setup?"
—Arthur Bradford, fiction and children’s writer (Dogwalker, Benny’s Brigade)

Julia Elliott’s fiction has appeared in Tin House, the Georgia Review, Conjunctions, Fence, and other publications. She has won a Rona Jaffe Writer’s Award, and her stories have been anthologized in Pushcart Prize: Best of the Small Presses, Best American Fantasy, and Best American Short Stories. Her debut story collec­tion, The Wilds, was chosen by Kirkus, BuzzFeed, Book Riot, and Electric Literature as one of the Best Books of 2014 and was a New York Times Book Review Editors’ Choice. She is currently working on a novel about hamadryas ba­boons, a species she has studied as an amateur primatolo­gist. She teaches English and Women’s and Gender Studies at the University of South Carolina in Columbia, where she lives with her daughter and husband. She and her spouse, John Dennis, are founding members of the music collective Grey Egg.