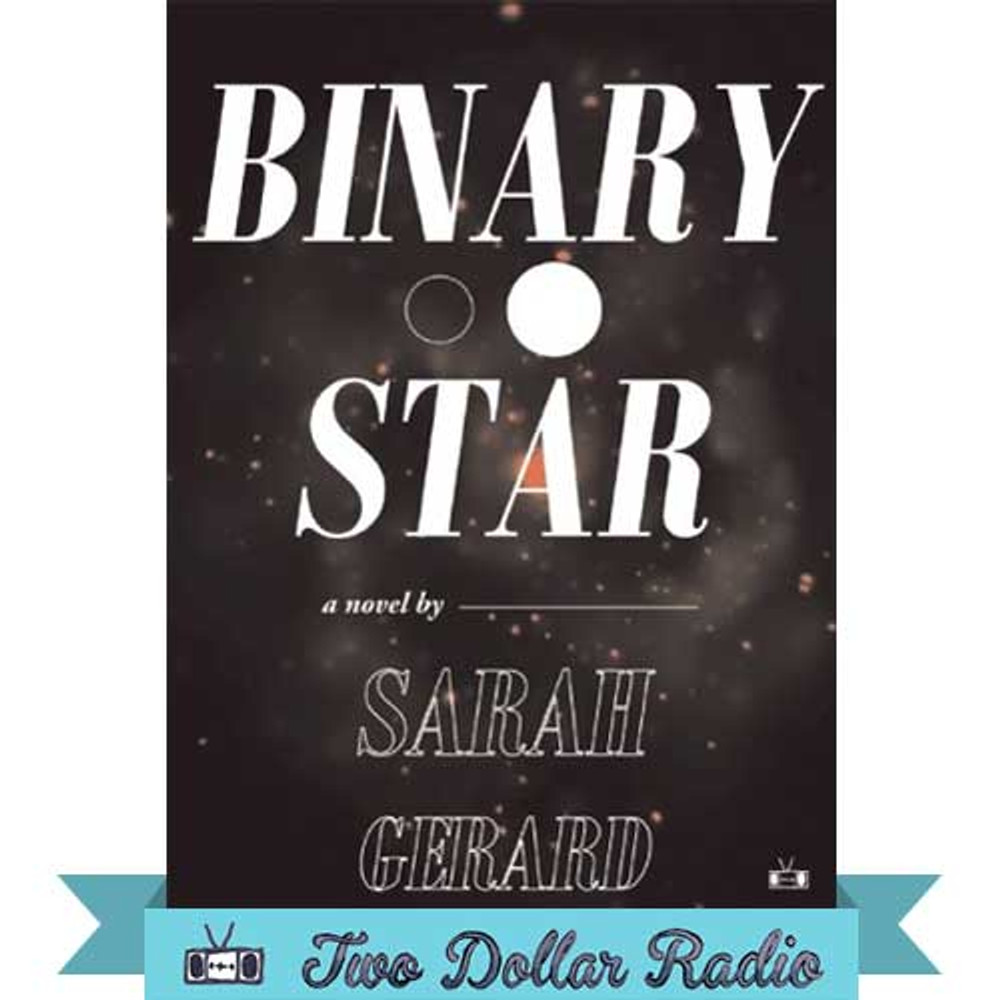 With luminous, lyrical prose, Binary Star is an impassioned account of a young woman struggling with anorexia and her long-distance, alcoholic boyfriend. On a road-trip circumnavigating the United States, they stumble into a book on veganarchism, and believe they've found a direction.

Binary Star is an intense, fast-moving saga of two young lovers and the culture that keeps them sick (or at least inundated with quick-fix solutions); a society that sells diet pills, sleeping pills, magazines that profile celebrities who lose weight or too much weight or put on weight, and books that pimp diet secrets or recipes for success.

"The particular genius of Binary Star is that out of such grim material in constructs beauty. It's like a novel-shaped poem about addiction, codependence and the relentlessness of the everyday, a kind of elegy of emptiness."
—New York Times Book Review

"Told in sparkling, lyrical prose, Sarah Gerard gives us the story of two lovers who, on a road trip across the U.S., do their best to rid themselves and each other of the sicknesses they’ve picked up along the way."
—Vanity Fair 'Best Books of 2015 for Gifting...and Hoarding'

"Gerard has written characters, in lyrical and deeply affecting prose, who are burned out and burning up what substance they have just to be known to each other."
—Vanity Fair

"In [Binary Star], Gerard's unnamed, semi-autobiographical protagonist goes on a road trip that's at first an escape, then an odyssey, then an extended metaphor for a tragic metamorphosis. Gerard has channeled her trials and tribulations into a work of heightened reality, one that sings to the lonely gravity of the human body."
—NPR 'Best Books of 2015'

"Remarkable... Partly novelistic, partly poetical, partly meditative, Binary Star is a beautiful inversion of these rudimentary, astronomical demonstrations, where bodies stand not as replacements for planets or asteroids or gravitational pulls, but where stars and black holes and galaxies stand, instead, for bodies."
—The Millions

"[Binary Star is] an intense, poetic, deeply original look at bodies, consumerism, and the way we strive to connect with one another, even through distance and dysfunction."
—BuzzFeed 'Best Fiction 2015'

"One of the breakout American independent books of the year. Gerard handles her subject matter—the cavernous nature of relationships, politics, the material and psychological condition of the body—with the care of an author who refuses to write down to her readers."
—Flavorwire 'Best Independent Press Books 2015'

"One of the finest debuts I have read, a daring and epic novel of love and lost souls."
—Largehearted Boy 'Favorite Novels 2015'

"Counterbalancing its heaviness, the prose also achieves a certain ecstasy of lightness, of breathless possibility. If the narrator herself is stagnant, it’s the stagnancy of spinning eternally on an established orbit. Binary Star suspends us in this state, and our stomachs lurch only when the ride stops."
—The Rumpus

"Probably the best thing about Binary Star is that its strong social critique, while wrapped in a very personal story, is enough to turn it into a narrative that matters beyond its entertainment value. A quick, brutal, and unflinchingly honest tale of death and consumption in contemporary America."
—Sundog Lit

"The narrator’s response to her pain is nuanced, and scorched with honesty, even as lies litter the pages. Gerard’s prose is too beautiful, too aware of the potential of poetic pacing, for wallowing."
—Full Stop

"Rhythmic, hallucinatory, yet vivid as crystal. Gerard has channeled her trials and tribulations into a work of heightened reality, one that sings to the lonely gravity of the human body."
—NPR

"A novel that takes risks, both in style and subject matter. A serious literary work."
—Electric Literature

"In this fictionalized love story about two troubled young people dealing with eating disorders and drug abuse, Gerard weaves real-life social issues into an otherworldly tale, in which the vast universe above serves as a guiding force in the pursuit for clarity."
—Refinery 29

"The story is propelled by Gerard's prose, which mirrors the narrator's sleep-deprived, thought-accelerated state. The sentences accumulate with manic intensity, painting a portrait of a young woman who's incapable of seeing things clearly and has a better understanding of stars that are light years away than of the workings of her own body."
—San Diego City Beat

"Binary Star shines even as it charts the breaking apart of worlds and the spiral-in of events, and is a special recommendation for the surreal poet-turned-reader who will find its scientific links to psychological states of mind to be inviting."
—Midwest Book Review

"It's remarkable... [Binary Star's] triumph, and its uniqueness, is in bringing us to tears over a great mess of intertwined ideas."
—Flavorwire

"The language moves through darkness and lightness, between being and unbeing, between past and future. But its center is always in the present. It is the only space where you can exist and disappear at the same time. Gerard leaves you there."
—Entropy Magazine

"Fast-paced, visceral, and distinctly tragic, Binary Star is a must read for anyone curious about what it means to be a body in space."
—Interview Magazine

“The book has the cool detachment of Joan Didion’s Play it As it Lays and the formal experimentation of Harry Mathews’ best work.”
—Nerve

“Binary Star dazzles and sings in the best of ways.”
—Gawker

One of the “Six Best Books of January.”; “Our indie pick of the month.”
—GQ

“Sarah Gerard’s debut, Binary Star, radiates beauty. Gerard captures the beauty and scientific irony of damaged relationships and ephemeral heavenly lights. Just as with the stars, it is collapse that offers the most illumination.”
—Los Angeles Times

“With the grace of a poem and the attitude of a punk anthem, Binary Star is an unusual treasure. Sarah Gerard is a young writer on the rise. She has a voice you have to hear to believe.”
—Bustle

“Gerard has a reputation for tackling her subject matter with unusual ferocity.”
—The Millions

“A glittering novel that tears into the headspace of a young anorexic in love with an alcoholic. Gerard’s spare language and spacing is an intimate, cinematic poem.”
—The Brooklyn Rail

“Gerard’s first novel, Binary Star, is one of the most hotly anticipated arrivals of early 2015.”
—Brooklyn Magazine

“Sarah Gerard’s lyrical prose is like nothing you’ve ever read—and the same can be said for the arresting Binary Star, too... it kind of blew apart my mind.”
—Bustle

“Fascinating... unlike anything else out there.”
—Brazos Bookstore blog

“One of the finest debuts I have read, a daring and epic novel of love and lost souls.”
—Largehearted Boy

“[Binary Star] feels like it’s going to dismantle itself on the next page or sentence, yet somehow Gerard is always in control, building up to a perfect and explosive ending.”
—Fanzine

"A bold, beautiful novel about wanting to disappear and almost succeeding. Sarah Gerard writes about love and loneliness in a new and brilliantly visceral way."
—Jenny Offill

"I felt a breathless intensity the whole time I read Sarah Gerard's brilliant Binary Star. I sped through it, dizzy, devastated, loving all of it."
—Kate Zambreno

"Two lost souls hurtle through a long dark night where drug store fluorescents light up fashion magazine headlines and the bad flarf of the pharmacy: Hydroxycut, Seroquel, Ativan, Zantrex-3. Gerard’s young lovers rightly revolt against the insane standards of a sick society, but their pursuit of purity—ideological, mental, physical—comes to constitute another kind of impossible demand, all the more dangerous for being self-imposed. Binary Star is merciless and cyclonic, a true and brutal poem of obliteration, an all-American death chant whose chorus is 'I want to look at the sky and understand.'"
—Justin Taylor

"By now I've read Binary Star twice, and I've become so entwined with it that I'm reluctant to talk about the subject at length. Let me just say that I've never read anything like it."
—Harry Mathews

Sarah Gerard's work has appeared in the New York Times, New York Magazine's 'The Cut,' Paris Review Daily, Slice Magazine, The Los Angeles Review of Books, Bookforum, and other journals. She is the author of the chapbook Things I Told My Mother and a graduate of The New School's MFA program for fiction.

The Hour of the Star