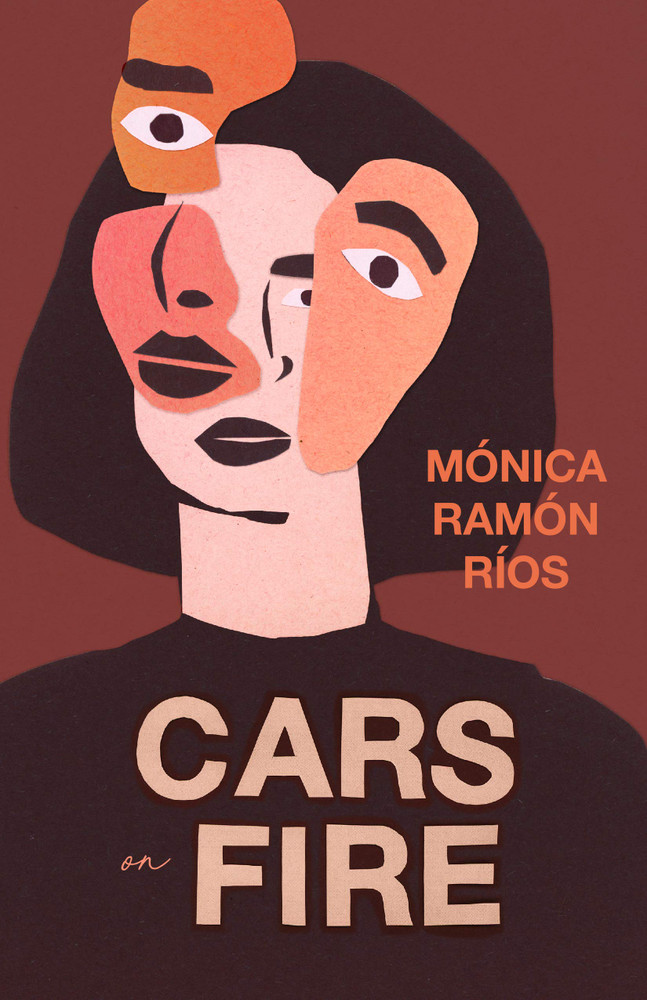 “When you live in an adopted country, when you’re an exile in your own body, names are simply lists that dull the reality of death.”

Cars on Fire, Mónica Ramón Ríos’s electric, uncompromising English-language debut, unfolds through a series of female characters―the writer, the patient, the immigrant, the professor, the student―whose identities are messy and ever-shifting. A speechwriter is employed writing for would-be dictators, but plays in a rock band as a means of protest. A failed Marxist cuts off her own head as a final poetic act. With incredible formal range, from the linear to the more free-wheeling, the real to the fantastical to the dystopic, Rios offers striking, jarring glimpses into life as a woman and an immigrant. Set in New York City, New Jersey, and Chile’s La Zona Central, the stories in Cars on Fire offer powerful remembrances to those lost to violence, and ultimately make the case for the power of art, love, and feminine desire to subvert the oppressive forces―xenophobia, neoliberalism, social hierarchies within the academic world―that shape life in Chile and the United States.

“These stylish, often strange stories are like cars on fire themselves—cacophonous, melodious, tragic—and each burn like a symbol of urban resistance. An important and unique contribution to immigrant and protest literature of the Americas.”—Fernando A. Flores, author of Tears of the Trufflepig

“Revolution is being waged outside the windows and inside the heads of Mónica Ramón Ríos's characters, obsessed by elsewheres, clawing away the veneer of the everyday. Like a throng of eloquent protestors, electric with rage, these stories occupy a gritty intersection where literature, film, history, and dream cross paths.”—Esther Allen

“Cars on Fire describes a prismatic, constellated world in highly chiseled, original prose. This is a book as wise as it is clever, probing, playful, irreverent, original, as if written by an old Kafkan soul in a modern-day, variegated New York, who, with a telling smile and nod to the reader, has acceded to open an ancient portal for a split-second and share a private glimpse of this newly absurd, charged and wispy world in transformation.”—Valerie Miles

“Mónica Ramón Ríos’ revolutionary novel Cars on Fire is an electrifying collection of stories that magnifies characters at the intersection of identity, culture, and language. . . . These characters are forced to reconcile their identities in a world tied heavily to politics and the growing, paranoid aversion to immigrants in the US.”—Kaitlyn Yates, The Arkansas International

Mónica Ramón Ríos was born in Santiago de Chile. She is the author of the novel Segundos (2010) and the twin novels Alias el Rucio and Alias el Rocío (2014-2015). As a scholar, she has written extensively on Latin American literature and film. Her short stories have appeared in several anthologies and journals such as Anomaly, Granta [Spain], Asymptote, Alba, and Buensalvaje. Ríos is also one of the creators of Sangría Editora, a publishing collective based in Santiago and New York.

Robin Myers was born in New York and is based in Mexico City. She is the author of several collections of poetry published as bilingual editions in Mexico, Argentina, and Spain. Her translations have appeared in Asymptote, the Los Angeles Review of Books, Waxwing, Inventory, and elsewhere. In 2009, she was a fellow of the American Literary Translators Association (ALTA); in 2014, she was a resident translator at the Banff Literary Translation Centre (BILTC). Her translation of Ezequiel Zaidenwerg’s Lyric Poetry Is Dead was published by Cardboard House Press in 2018.