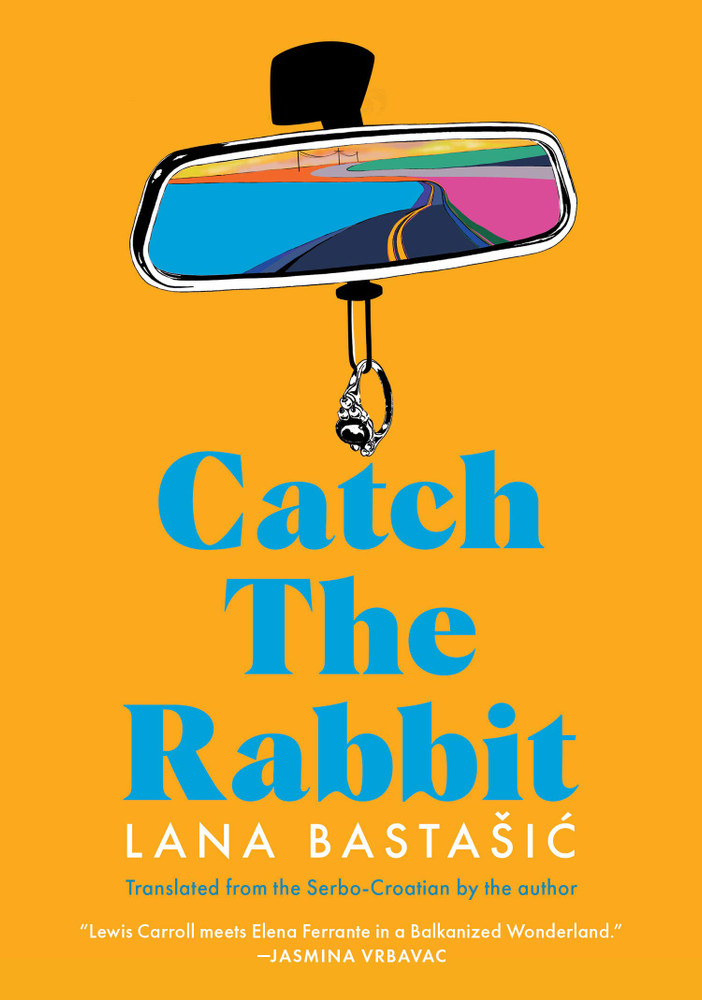 Winner of the 2020 European Union Prize for Literature, Lana Bastašić’s powerful debut novel Catch the Rabbit is an emotionally rich excavation of the complicated friendship between two women in a fractured, post-war Bosnia as they venture into the treacherous terrain of the Balkan wonderlands and their own history.

It’s been twelve years since inseparable childhood friends Lejla and Sara have spoken, but an unexpected phone call thrusts Sara back into a world she left behind, a language she’s buried, and painful memories that rise unbidden to the surface. Lejla’s magnetic pull hasn’t lessened despite the distance between Dublin and Bosnia or the years of silence imposed by a youthful misunderstanding, and Sara finds herself returning home, driven by curiosity and guilt. Embarking on a road trip from Bosnia to Vienna in search of Lejla’s exiled brother Armin, the two travel down the rabbit hole of their shared past and question how they’ve arrived at their present, disparate realities.

As their journey takes them further from their homeland, Sara realizes that she can never truly escape her past or Lejla―the two are intrinsically linked, but perpetually on opposite sides of the looking glass. As they approach their final destination, Sara contends with the chaos of their relationship. Lejla’s conflicting memories of their past, further complicated by the divisions brought on by the dissolution of Yugoslavia during their childhoods, forces Sara to reckon with her own perceived reality. Like Elena Ferrante’s My Brilliant Friend, Catch the Rabbit lays bare the intricacies of female friendship and all the ways in which two people can hurt, love, disappoint, and misunderstand one another.

“A Yugoslav-born writer’s debut novel is a tale of fraught female friendship…. A moving exploration of how perspective characterizes friendship, sometimes to a fault.”

“The narrative reaches a greatly satisfying climax, built on themes of rediscovering the past, memories, women’s friendships, language, and identity. This unforgettable tour de force surprises at every turn.”

“Set against the striking backdrop of post-war Bosnia, Catch the Rabbit is a poignant, wrenching novel about the power of memory and the challenges of knowing another person.”

“Bastašić’s intense examination of female friendship provides a portal into the tumultuous recent history of the former Yugoslavia. Awarded the 2020 European Union Prize for Literature, Bastašić’s compelling and enlightening first novel arrives in the US in her own agile translation, sure to engage urbane anglophone readers.”

“This intense, dreamlike, gorgeously-realized descent into history and memory is deserving of its Ferrante comparisons.”

“The story itself is secondary to this beautifully written, dreamlike account of a journey…. Bastašić, like Beckett and Nabokov, translates her own work. Straddling two languages, her writing is surreal and rich. Words and language are like extra characters…. This is a haunting book. Both girls hang around in the reader’s heart and imagination long after the last word. Like the Balkan conflict itself, the story is endless, looping, at once unreal and very clear.”

“[Bastašić’s] Sara is a ferociously satisfying narrator, and though the subject of this book has already been adduced as some kind of Ferrante friendship X-ray, that shortchanges Bastašić’s skill. The heart of the novel is a braiding of time and love.”

“Catch the Rabbit, the spectacular debut novel from the Yugoslav-born Lana Bastašić, uses these quieter consequences of the war and its aftermath to bolster a fantastically genuine yet gently fantastical story of female friendship…. Bastašić, who also translated the book into English, is a glorious writer, approaching even familiar emotions with a unique vibrancy, and if Catch the Rabbit simply followed Sara and Lejla as they drove from, say, Minneapolis to St. Louis, it would still be well worth your time.”

“A fascinating trip down the rabbit hole that is compulsion wrapped in dis-ease.”

Lana Bastašić is a Yugoslav-born writer. She majored in English and holds a master’s degree in cultural studies. She has published three collections of short stories, one book of children’s stories, and one of poetry. Her debut novel Catch the Rabbit was shortlisted for the 2019 NIN Award and was awarded the 2020 European Union Prize for Literature. She lives in Belgrade.