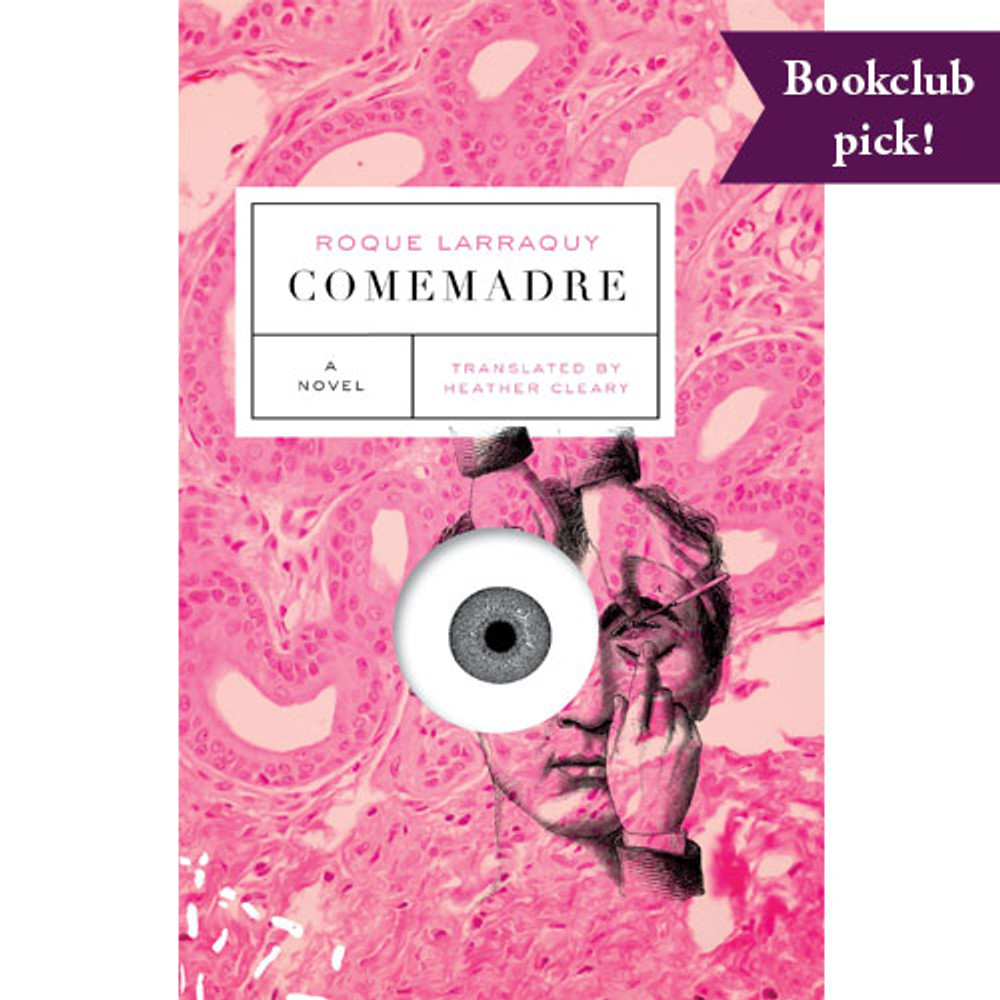 This title is our September 2018 pick for the UNICORN BOOKCLUB! Find out more here.

In the outskirts of Buenos Aires in 1907, a doctor becomes involved in a misguided experiment that investigates the threshold between life and death. One hundred years later, a celebrated artist goes to extremes in search of aesthetic transformation, turning himself into an art object. How far are we willing to go, Larraquy asks, in pursuit of transcendence? The world of Comemadre is full of vulgarity, excess, and discomfort: strange ants that form almost perfect circles, missing body parts, obsessive love affairs, and man-eating plants. Darkly funny, smart, and engrossing, here the monstrous is not alien, but the consquence of our relentless pursuit of collective and personal progress.

“[Comemadre] arrives like a shockwave.” —Los Angeles Review of Books

“The prose is distilled but rich—like dark chocolate.” —Chicago Tribune

“Comemadre creates a full circle of the grotesqueries humans inflict upon one another in pursuit of immortality. . . . Read Larraquy to experience a strange waking dream from which there is no escape.” —Arkansas International

“Grotesque, outrageous, and insanely funny, [Comemadre] has almost no equal in literature.” —BOMB

“In this dark, dense, surprisingly short debut novel by the Argentinian author, we’re confronted with enough grotesqueries to fill a couple Terry Gilliam films and, more importantly, with the idea that the only real monsters are those that are formed out of our own ambition.” —The Millions

“Like a beloved B movie, this is the campy horror show all my fellow sickos have been waiting for.” —Keaton Patterson

“I love Comemadre. But here I am, days after reading, still asking myself what kind of book it is. Is it humor? Horror? Is it about art? Science? Philosophy? One thing is certain: it is just the kind of book that you’ll want to recommend to your friends over and over again, and here I am, still doing it!” —Samanta Schweblin

“Larraquy has written a perfect novel: spare, urgent, funny, original, and infused with wonderfully subtle grace. I neglected my domestic duties to devour it.” —Elisa Albert

“The absurd is planted and buried throughout Comemadre, creating a sense of constant doubt and uncertainty. The writing is sparse and evocative, even as it takes considerable risks. The effect accomplishes a great deal in short spaces.” —Full Stop

“Moving from a sanatorium at the beginning of the twentieth century in which the doctors decide to use their patients as fodder for a deadly experiment, to an artist at the beginning of the twenty-first who pushes the fleshy manipulations of Chris Burden and Damien Hurst to a new extreme, Comemadre is a raucous and irreverent philosophical meditation on the relationship of the body to science and to art. Walking a line between parody and critique, this is a grotesquely funny and powerful book.” —Brian Evenson

“[Comemadre] abounds with visceral imagery and unsettling discussions of the body; it’s a brief novel, but its impact is massive.” —Vol 1 Brooklyn

“Larraquy ventures into the gothic here, only to push beyond it into an even more disquieting realm of obsession, transformation, and the monstrous unknown.” —Words without Borders

“Comemadre is one of the wildest and most disturbing novels I’ve read. With a language that dissects the world while describing it, Roque Larraquy constructs a dark fable about the annihilation of the body, about perversions of art and science. Heather Cleary’s magnificent translation does justice to this extravagant gem—composed like a Hieronymus Bosch diptych that sets us before the monsters of unleashed reason.” —Daniel Saldaña París

“One of the most bizarre, darkly comic and fascinating books that I’ve read this year.” —Beyond the Epilogue

“Comemadre is a sensory experience: images repeat, ‘confession’ has a smell, and obsession feels palpable. The two narrative threads within this wildly strange and perversely humorous novel map the expansive life of the mind, the drive to make a mark on history, and the impact of transgressions in art and science. If a Dalí painting could speak, it would tell us this violently charming tale of ants marching in perfect circles and bodies pushed beyond the limits of the possible.” —Elizabeth Willis, Avid Bookshop

“I’m not entirely sure what the fuck just happened, but, whatever you might say about Roque Larraquy’s Comemadre, you sure as hell will have something to say. A dizzying, macabre, yet ultimately deliriously delicious tale of medical testing, decapitations, botanically-born flesh-eating larvae, unrequited love, deformities, and extreme art, Comemadre won’t soon be easily forgotten (if ever it is). Larraquy, an Argentinean screenwriter who has also penned two books (Comemadre being the first translated into English), is whirlwindishly creative and evidently possessed of a prodigious, if darkly tinged, imagination.

Two distinct narratives, ultimately linked yet set 102 years apart, combine to grotesque and lasting effect. Larraquy writes fantastically and, however unlikely it may seem given its obsessive subjects, with considerable humor. The same unsettling, disquieting feeling one might be left with after engaging, say, Georges Bataille’s The Story of the Eye or fellow Argentinean author Samanta Schweblin’s Fever Dream is present in spades. Comemadre never flinches, however much its readers inevitably must. Comemadre lures, bedevils, and ultimately enamors—distending reality (and decency) in the process. Feral fiction at its finest, Larraquy’s Comemadre is beach reading if you inexplicably find yourself marooned with Piggy, Jack, Ralph, and the rest of Golding’s deserted island boys.” —Jeremy Garber, Powell’s Books

Roque Larraquy is an Argentinian writer, screenwriter, professor of narrative and audiovisual design, and the author of two books, La comemadre and Informe sobre ectoplasma animal. Comemadre will be his first book published in English.