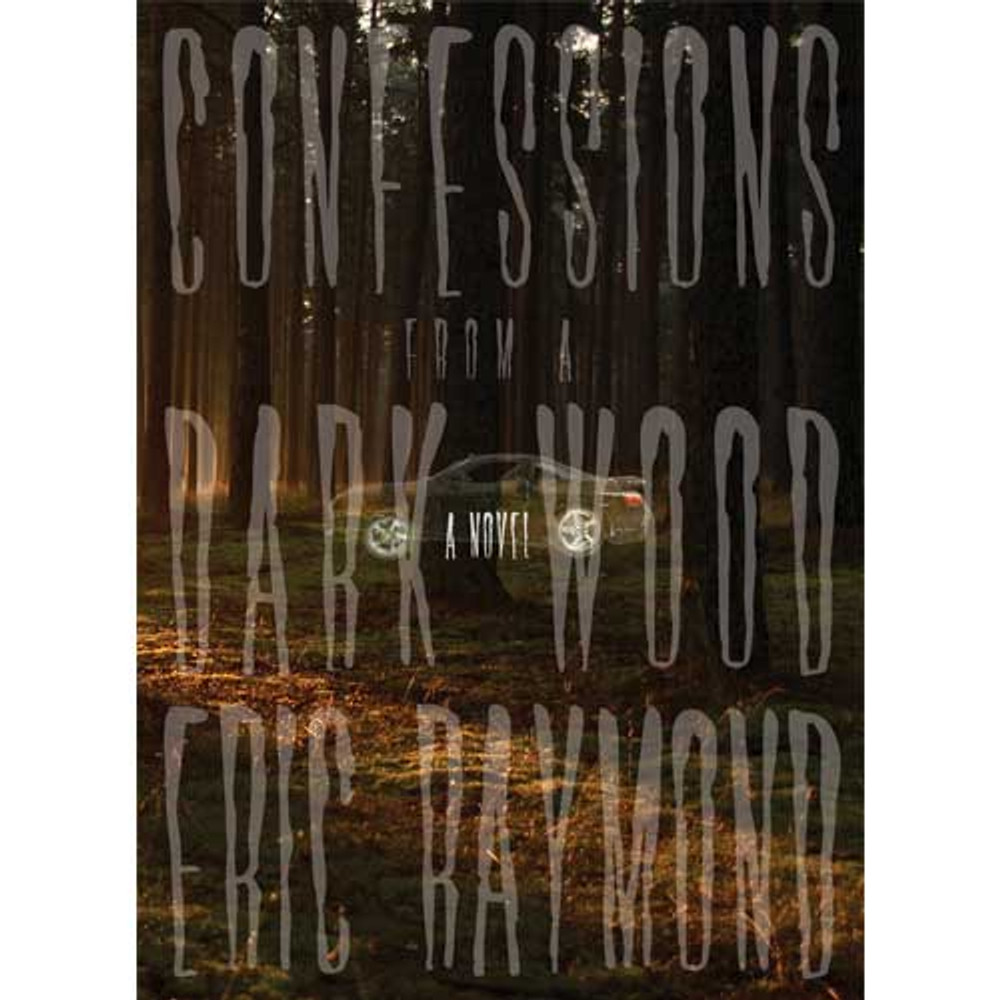 You have received a business card.
It invites you into the world of global capital brand management consultancy.
Prepare for pain.

You'll meet Nick, a hapless pawn in the world of global capital brand management consulting. And his girlfriend Sadie Parish, the first domestic suicide bomber. And his boss, emperor of b****t, Pontius J. LaBar. And PJ's dreaded orangutan. Their story is a hilarious, heartbreaking, painfully smart satire that guides you through the high dollar swamps of modern industry.

"What was the strongest debut book of 2012? Confessions From a Dark Wood by Eric Raymond. It’s an amazingly self-assured debut, and the funniest, weirdest book I read this year."
—Michael Schaub, Salon

"Triumphs at tapping into the despairing cynicism that is the domain of disgruntled employees. This is a soothing balm for anyone who has ever felt enslaved by an office e-mail account, or fantasized about a boss being attacked by a large orangutan at a company picnic."
—Publishers Weekly

"Raymond is a master of deploying consultant blather for comic effect and of finding the grotesque in the mundane."
—Gabe Durham, The Collagist

"The similarities to American Psycho are obvious, if you replace a hyper-privileged insider eviscerating everything atop the social pyramid with congenial Nick Bray. But American Psycho was a grotesque from the get-go, making it obvious that it was a work of fiction; in both its title and execution, Confessions is a satire that sounds more like real life. Bateman kills people; Nick can only manage to drown his Blackberry."
—Sabra Embury, The L Magazine

"This book is circus and spectacle. This book is haunted by bad bosses and tragic love affairs. This book is watched over by lost fathers. This book says many things, but at the points at which I most loved this book, it was saying this: We move around in the world as collections of all that we have experienced, all we have known. We are connected by invisible threads to all those we have loved, who have loved us. We go after things we think we want, or we don’t. We act on the wounds we have sustained whether or not we acknowledge them. Whether or not we can identify the places from which we are bleeding. There is no fate. There is no destiny. There is only our choices and their consequences."
—Mary-Kim Arnold, HTML Giant

"Raymond's America is one of ugly extremes. He zeroes in on the situational humor of our ruthless business practices and absurd privilege and calculates where it might lead us. Artful, engaging and intense to the last page, Raymond is an entertaining writer with something to say about the human cost of compulsive consumerism."
—Jim Ruland, San Diego CityBeat

"With surgically sharp prose, Eric Raymond weaves identity issues with the human need to connect, the strange forms those connections can take, and a seething contempt for the delusional nature of corporate inanity."
—Kathleen Brazie, Charlotte Viewpoint

"Desperate, Nick Bray takes a job at LaBar Partners Limited. The trappings are extravagant, but the profits are increasingly fictional. It's a love letter to San Francisco, city of TSA poets, and a mail bomb to the plutocracy where even the orangutan is a V.P."
—Kevin Thomas, The Rumpus: HORN! Reviews

"Raymond writes in prose that reminds me of the best Douglas Coupland has to offer (Generation X, Life After God, Player One) meshed with the pinpoint detail reminiscent of David Foster Wallace."
—Michael J. Seidlinger, The Lit Pub

"The world of Eric Raymond's winning novel may be the 'post-idea economy,' but rest assured, the book is never post-smart, or post-funny. It's a rollicking and inventive corporate (and cultural) satire—get in now at the ground floor, people."
—Sam Lipsyte, author of The Ask

"In a world where cash has become language, Eric Raymond's Confessions from a Dark Wood wastes no syllable in converting cultural mechanisms into a well-oiled, wise-cracking machine. Smart as Saunders, tight as Ellis, but banking waters of its own, after this one we'll no longer 'forget they built the Magic Kingdom on swamps.'"
—Blake Butler, author of Nothing: A Portait of Insomnia and There Is No Year

Goodreads Reviews for Confessions from a Dark Wood

Eric Raymond is the author of the novel Confessions from a Dark Wood (2012) published by Sator Press. His novel Golden Gate is due out from Tyrant Books in 2020. He has appeared in 40 Stories: New Writing from Harper Perennial, The Rumpus, Burnaway, Lodown Magazine, The Radvocate, Dark Fucking Wizard, [PANK] Magazine, & Otherppl with Brad Listi. Born and raised in Central Florida, Eric moved to San Francisco in 2004. He holds a BA in English from Stetson University and an MFA in Fiction from Bennington College. In addition to writing, he is also a former member of the San Francisco Pinball Department and ranked IFPA player. Initials: ERR.