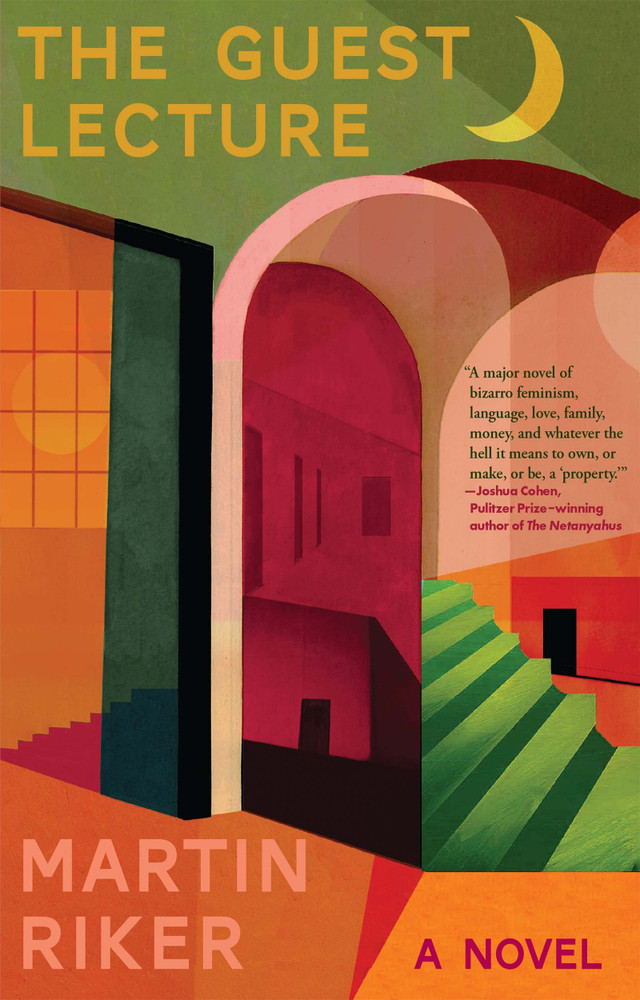 With “a voice as clear, sincere, and wry as any I’ve read in current American fiction” (Joshua Cohen), Martin Riker’s poignant and startlingly original novel asks how to foster a brave mind in anxious times, following a newly jobless academic rehearsing a speech on John Maynard Keynes for a surprising audience

In a hotel room in the middle of the night, Abby, a young feminist economist, lies awake next to her sleeping husband and daughter. Anxious that she is grossly underprepared for a talk she is presenting tomorrow on optimism and John Maynard Keynes, she has resolved to practice by using an ancient rhetorical method of assigning parts of her speech to different rooms in her house and has brought along a comforting albeit imaginary companion to keep her on track—Keynes himself.

Yet as she wanders with increasing alarm through the rooms of her own consciousness, Abby finds herself straying from her prepared remarks on economic history, utopia, and Keynes’s pragmatic optimism. A lapsed optimist herself, she has been struggling under the burden of supporting a family in an increasingly hostile America after being denied tenure at the university where she teaches. Confronting her own future at a time of global darkness, Abby undertakes a quest through her memories to ideas hidden in the corners of her mind—a piecemeal intellectual history from Cicero to Lewis Carroll to Queen Latifah—as she asks what a better world would look like if we told our stories with more honest and more hopeful imaginations.

With warm intellect, playful curiosity, and an infectious voice, Martin Riker acutely animates the novel of ideas with a beating heart and turns one woman’s midnight crisis into the performance of a lifetime.

Praise for The Guest Lecture:

“Riker spins a brilliant and innovative exploration of modern economic history in the form of a late-night waking dream . . . Abby’s metaphysical wanderings swell to a scorching condemnation of modern life and an empathetic celebration of its meaningful moments. It’s a transporting, clever, and inspired work of fiction.”—Publishers Weekly (starred review)

“On the eve of a guest lecture she’s set to deliver—to an audience whose identity is never fully revealed—economics professor Abby wrestles with thorny theoretical issues and a few problems closer to home . . . [A] unique novel of ideas. A thoughtful and thought-filled stroll down a life’s Memory Lane.”—Kirkus Reviews

“Keynes himself declared that ‘words ought to be a little wild,’ and this clever, provocative novel, with its hard-wrought optimism, honors that call to disrupt.”—Booklist

“The Guest Lecture is so funny and sad and smart about its sadness. Its topicality isn’t cheap, but deep and earned—our own—founded in the way thinking and feeling have been ceded to politics, often by those of us who think and feel the most. Martin Riker has written a major novel of bizarro feminism, language, love, family, money, and whatever the hell it means to own, or make, or be, a ‘property,’ in a voice as clear, sincere, and wry as any I’ve read in current American fiction.”—Joshua Cohen, author of The Netanyahus, winner of the Pulitzer Prize

“A wonderfully playful novel! The Guest Lecture follows a sleepless mind restlessly roving through major economic questions and inviting those questions into conversation with the everyday problems of inhabiting a house and a job and a life. It’s a fun read and an education, like the best of lectures.”—Eula Biss, author of Having and Being Had and On Immunity

“This funny, audacious and deliciously self-critical novel can be read as a fruitful attempt at fulfilling that old and beautiful dream of reuniting literature and life.”—Alejandro Zambra, author of Chilean Poet

“Rocking back and forth on a lectern made out of insomnia and darkness, brilliance and humor, Martin Riker gives us a gorgeous novel that turns the lecture inside out. Riddled with ghosts and stage-fright and love, everything it takes to give an idea breath is showing. As formally masterful as it is gutsy, The Guest Lecture is the spiel of a lifetime, a life’s work, a working life. If all lectures were like Riker’s, I’d plant myself in the very front row, dead center, and never go home.”—Sabrina Orah Mark, author of Wild Milk and the forthcoming Happily

“The Guest Lecture is a funny and surprising novel about failure, economic history, the logic of memory, and what it means to care for one another at this terrifying moment in history. Abby's dark night of the soul left me feeling something I had not felt in a long time—hope.”—Christine Smallwood, author of The Life of the Mind

MARTIN RIKER is the co-founder and publisher of the feminist press Dorothy, a Publishing Project, and the author of Samuel Johnson’s Eternal Return. He teaches in the English department at Washington University in St. Louis, and his criticism has appeared in the Wall Street Journal and the New York Times, among other publications.