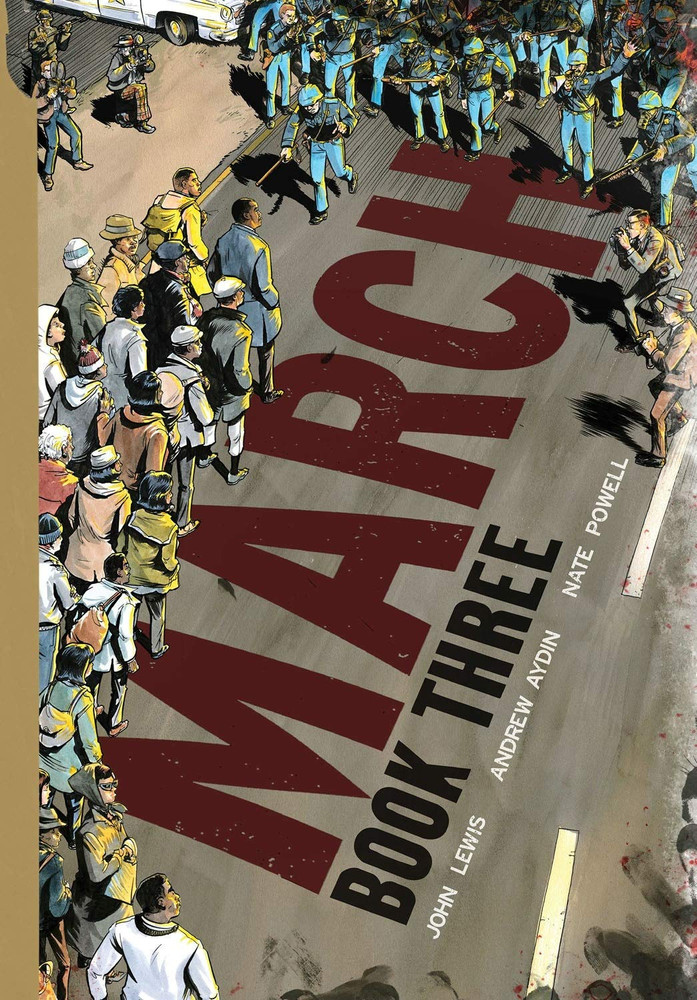 Brand: Top Shelf Productions
Current Stock: 1
UPC: 9781603094023
Gift Wrapping: Gift Wrapping Available
Authors: John Lewis (Author), Andrew Aydin (Author), Nate Powell (Illustrator)
2016 National Book Award Winner for Young People's Literature
2017 Printz Award Winner
2017 Coretta Scott King Author Award Winner
2017 Sibert Medal Winner
2017 YALSA Award for Excellence in Nonfiction Winner
2017 Walter Award Winner
Welcome to the stunning conclusion of the award-winning and best-selling MARCH trilogy. Congressman John Lewis, an American icon and one ofthe key figures of the civil rights movement, joins co-writer Andrew Aydin and artist Nate Powell to bring the lessons of history to vivid life for a new generation, urgently relevant for today's world.
By the fall of 1963, the Civil Rights Movement has penetrated deep into the American consciousness, and as chairman of the Student Nonviolent Coordinating Committee, John Lewis is guiding the tip of the spear. Through relentless direct action, SNCC continues to force the nation to confront its own blatant injustice, but for every step forward, the danger grows more intense: Jim Crow strikes back through legal tricks, intimidation, violence, and death. The only hope for lasting change is to give voice to the millions of Americans silenced by voter suppression: "One Man, One Vote."

To carry out their nonviolent revolution, Lewis and an army of young activists launch a series of innovative campaigns, including the Freedom Vote, Mississippi Freedom Summer, and an all-out battle for the soul of the Democratic Party waged live on national television.
With these new struggles come new allies, new opponents, and an unpredictable new president who might be both at once. But fractures within the movement are deepening ... even as 25-year-old John Lewis prepares to risk everything in a historic showdown high above the Alabama river, in a town called Selma.

"Gr 8 Up—In the final installment in the trilogy, Congressman Lewis concludes his firsthand account of the civil rights era. Simultaneously epic and intimate, this dynamic work spotlights pivotal moments (the bombing of the 16th Street Baptist Church in Birmingham, AL; the Freedom Summer murders; the 1964 Democratic National Convention; and the Selma to Montgomery marches) through the lens of one who was there from the beginning. Lewis's willingness to speak from the heart about moments of doubt and anguish imbues the book with emotional depth. Complex material is tackled but never oversimplified—many pages are positively crammed with text—and, as in previous volumes, discussion of tensions among the various factions of the movement adds nuance and should spark conversation among readers. Through images of steely-eyed police, motion lines, and the use of stark black backgrounds for particularly painful moments, Powell underscores Lewis's statement that he and his cohorts "were in the middle of a war." These vivid black-and-white visuals soar, conveying expressions of hope, scorn, and devastation and making storied figures such as Martin Luther King Jr., Malcolm X, and Fannie Lou Hamer feel three-dimensional and familiar. VERDICT This essential addition to graphic novel shelves, history curricula, and memoir collections will resonate with teens and adults alike."
—Mahnaz Dar, School Library Journal

"March is one of the most important graphic novels ever created -- an extraordinary presentation of an extraordinary life, and proof that young people can change the world. I'm stunned by the power of these comics, and grateful that Congressman Lewis's story will enlighten and inspire future generations of readers and leaders."
--Raina Telgemeier

"The closest American peer to Maus has arrived."
--The Washington Post

"March may be the best civil rights story ever... I would even put it in the same hallowed category as Art Spiegelman's Pulitzer Prize-winning Maus."
--Mashable


"A stirring call to action that's particularly timely in this election year, and one that will resonate and empower young readers in particular. Essential reading."
--BOOKLIST (STARRED)

"A living icon of the civil rights movement brings his frank and stirring account of the movement's most tumultuous years (so far) to a climax."
--KIRKUS (STARRED)

"The March series--Congressman John Lewis, Capitol Hill staffer Andrew Aydin and illustrator Nate Powell's Eisner Award-winning project documenting the Civil Rights Movement of the 1960s in comic book format--concludes with a message that has proven to be just as relevant in 2016 as it was 50 years ago."
--SHELF-AWARENESS

"There is a lot of tension and emotion with no sugarcoating of history here; Powell's drawings evoke a close-up black-and-white documentary atmosphere, recording the movement's major victories as well as the tumult that the young Lewis faced. Nevertheless, March: Book Three ends on a hopeful note. What better way to teach younger generations than by historical example of what is achievable when people are willing to sacrifice greatly for a worthy cause?"
--Nancy Powell, freelance writer and technical consultant