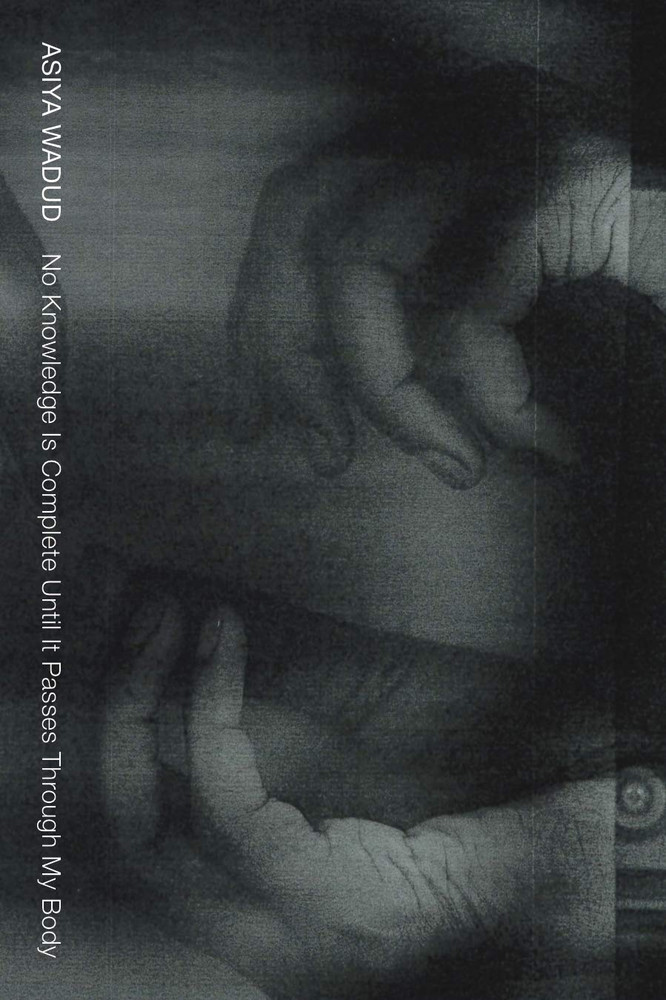 No Knowledge is Complete Until it Passes Through My Body

Through a series of transmissions and proposals, the poems in No Knowledge Is Complete Until It Passes Through My Body explore the intelligence of the body, especially bodies under duress. Wadud evokes the hum and chorus that fills us when we write to explore methods and modes of circulation, continuum, and claustrophobia. Drawing from the performance practice of Okwui Okpokwasili and Peter Born, Wadud asks, how does a thread of logic form? How do we extend the thread on either end so we see the lineage and continuum of our thoughts?

"This poetry is filled with incantatory language and startling details; it ranges through history and the natural world, composing a compelling metaphysics of black diasporic womanhood."―Evie Shockley, NPR

"No Knowledge Is Complete Until It Passes Through My Body sprawls, hinges on the held gaze, the long breath. In this, her third remarkable collection, Asiya Wadud begins to 'peel at the seams' of what we know and how, expands the line into a field into a sea. Memory, history, and possibility, bound collectively by the hull, the wing, and the wave, resound throughout, anchored by a 'migratory "I"' who learns, and in learning insists that whatever comes, we must live in it―atolls no more but instead, hopefully, archipelagoes."―Donika Kelly

"Asiya Wadud’s title, No Knowledge Is Complete Until It Passes Through My Body is a quote from Congolese dancer and choreographer Faustin Linyekula. Wadud's poems move with the body, with light, weight, and multiple forms of life. She repeats and returns to interiors and edges, to threads, rooms, coastlines, bodies of water, the Middle Passage. 'Most knowledge is scant magic,' incomplete even as it moves through the body. In resisting completeness, Wadud generates ample magic."―Judy Hussie-Taylor

"Asiya Wadud is a weaver of magical syllables. In her hands, language has weft and warp, words have intricate texture, and sentences unravel and reassemble as tangled webs of gold. In No Knowledge Is Complete Until It Passes Through My Body, her sentences enfold black feminism in verse. They craft lyrical-spiritual duets with Harriet Jacobs and Christina Sharpe, with Angela Davis and Hortense Spillers, with Dionne Brand and Saidiya Hartman, with Audre Lorde and Okwui Okpakwasili. Her words wrap womanism in rhyme."―Tina Campt

"According to the principles of the distribution of light, or, God’s will, a person interested in the future must account for each flicker or movement of the enclosures that engage and separate us from and with one another. Asiya’s work takes, indeed, a bird’s eye view. I think it is possible to believe in the invocation of the wide view."―Simone White

"…this wildly associative debut from Wadud works as a lyrical introduction to the phenomenology of border-crossing… What keep the book from becoming a catalog of unremitting horror are Wadud’s capacious heart, inventive mind, and diasporic imagination…" ―Publishers Weekly

"Asiya Wadud’s debut collection, Crosslight for Youngbird, is searching, extroverted, and humane, yet concerns itself with the misery, doubt, and confusion of forced exodus and unwelcome borders, returning again and again to the current migrant crisis in Europe and the Middle East."―Austin Adams, LA Review of Books

Asiya Wadud is the author of Crosslight for Youngbird (Nightboat Books, 2018), a finalist for the Hurston/Wright Legacy Award in Poetry. Her other collections include day pulls down the sky… a filament in gold leaf, written collaboratively with Okwui Okpokwasili (Belladonna/ Danspace, 2019) and Syncope (Ugly Duckling Presse, 2019) and No Knowledge Is Complete Until It Passes Through My Body. Asiya teaches poetry at Saint Ann’s School and occasionally leads an English conversation group for new immigrants at the Brooklyn Public Library. A member of the Belladonna Collaborative, her work has been supported by the Lower Manhattan Cultural Council, Danspace Project, Brooklyn Poets, Dickinson House, Mount Tremper Arts, and the New York Public Library, among others. Asiya is a 2019-2020 Lower Manhattan Cultural Council Artist-in-Residence and also a 2019-2020 writer-in-residence at Danspace Project. She lives in Brooklyn, New York.

Swim Through the Darkness: My Search for Craig Smith and the Mystery of Maitreya Kali