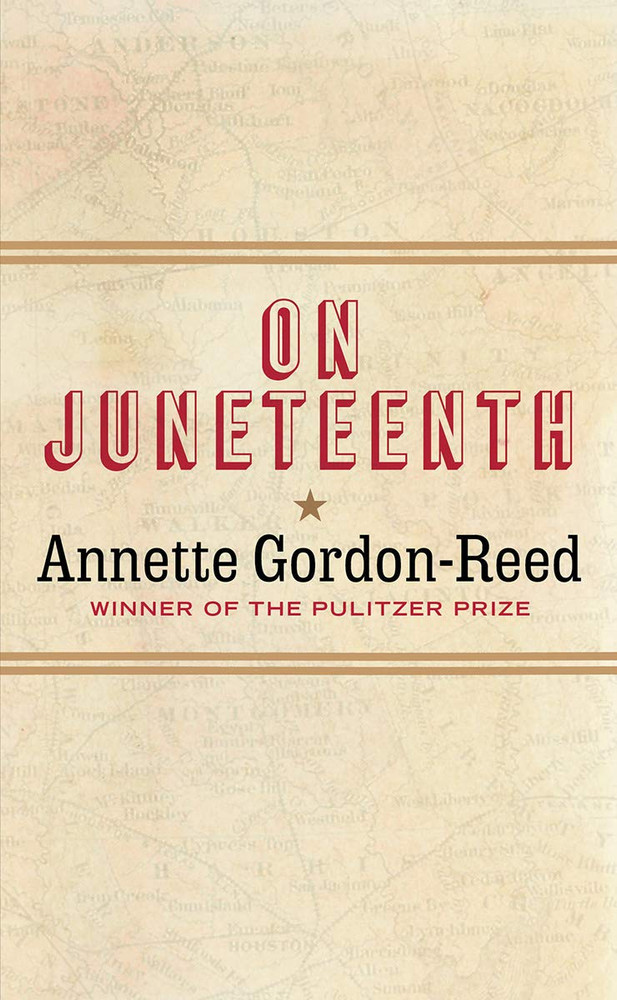 The essential, sweeping story of Juneteenth’s integral importance to American history, as told by a Pulitzer Prize–winning historian and Texas native.

Weaving together American history, dramatic family chronicle, and searing episodes of memoir, Annette Gordon-Reed’s On Juneteenth provides a historian’s view of the country’s long road to Juneteenth, recounting both its origins in Texas and the enormous hardships that African-Americans have endured in the century since, from Reconstruction through Jim Crow and beyond. All too aware of the stories of cowboys, ranchers, and oilmen that have long dominated the lore of the Lone Star State, Gordon-Reed―herself a Texas native and the descendant of enslaved people brought to Texas as early as the 1820s―forges a new and profoundly truthful narrative of her home state, with implications for us all.

Combining personal anecdotes with poignant facts gleaned from the annals of American history, Gordon-Reed shows how, from the earliest presence of Black people in Texas to the day in Galveston on June 19, 1865, when Major General Gordon Granger announced the end of legalized slavery in the state, African-Americans played an integral role in the Texas story.

Reworking the traditional “Alamo” framework, she powerfully demonstrates, among other things, that the slave- and race-based economy not only defined the fractious era of Texas independence but precipitated the Mexican-American War and, indeed, the Civil War itself.

In its concision, eloquence, and clear presentation of history, On Juneteenth vitally revises conventional renderings of Texas and national history. As our nation verges on recognizing June 19 as a national holiday, On Juneteenth is both an essential account and a stark reminder that the fight for equality is exigent and ongoing.

"The Education of Henry Adams is the second most influential memoir in American letters, after Benjamin Franklin’s autobiography. Annette Gordon-Reed’s insightful, often touching reflection on the Black experience in Texas, starting with her own, lands between these two.... Gordon-Reed has earned acclaim as one of the most important American historians of our time."
― H.W. Brands, New York Times Book Review, cover review

"In a series of short, moving essays, [Gordon-Reed] explores “the long road” to June 19, 1865, when Maj. Gen. Gordon Granger announced the end of legalized slavery in Texas, the state where Gordon-Reed was born and raised.... No matter what she’s looking at, Gordon-Reed pries open this space between the abstract and particular.... One of the things that makes this slender book stand out is Gordon-Reed’s ability to combine clarity with subtlety, elegantly carving a path between competing positions, instead of doing as too many of us do in this age of hepped-up social-media provocations by simply reacting to them. In On Juneteenth she leads by example, revisiting her own experiences, questioning her own assumptions ― and showing that historical understanding is a process, not an end point."
― Jennifer Szalai, New York Times

"The Pulitzer Prize-winning historian interweaves her personal, trailblazing history with that of her home state to pierce many of the false narratives we learned as children about the country’s treatment of African Americans.... Gordon-Reed offers a timely history lesson. She does so with beautiful prose, breathtaking stories and painful memories.... Gordon-Reed’s literary gift is the ability to research and write about subjects with broadly accepted stories in a convincing way that allows readers to consider other perspectives."
― Daina Ramey Berry, Washington Post

"Gordon-Reed offers a book that is both profound and personal in its exploration of the ways history shapes our lives and becomes distorted and reinvigorated over time."
― TIME, "The Best Books of 2021 So Far"

"[Gordon-Reed's] academic training tempers that lifelong sense of Texas exceptionalism as she details with clear-eyed detachment yet enduring affection the Lone Star State’s outsized impact on the nation.... The beauty of history, Gordon-Reed argues, of knowing what didn’t happen as well as what did, is that it reminds us of what is yet possible.... This consummate historian suggests that we neither remember nor forget the Alamo but instead remember the people whose “boundless dreams [of freedom] took flight” before we were born."
― Angela Ards, Texas Monthly

"The slim 140-page volume is almost like a pocket constitution, and I could see it having a life in classrooms as well as in the hands of lay readers of history.... A compelling counter-narrative to familiar stories of [Texas]’s origins."
― Irene Vázquez, Texas Observer

"Gordon-Reed's scholarship is about challenging established notions. And just as she did with the prevailing narrative around Jefferson ― as a founding father who could never have fathered children with a Black woman ― so she does with the state that gave the nation Juneteenth.... Gordon-Reed's book is a historian's interrogation of her home state. But like Juneteenth, it speaks to the rest of the nation."
― Rosalind Bentley, Minneapolis Star-Tribune

"Gordon-Reed is the textbook definition of public intellectual; and yet she gets personal in this slender, evocative memoir, blending gorgeous details from her small-town Texas girlhood with the unofficial celebration of slavery’s demise and the broader canvas of race in America."
― Oprah Daily, "Best Books to Pick Up This May"

"Pulitzer Prize winner Annette Gordon-Reed renders a perfectly quilted work of history seen through the eyes of an African American family in Texas."
― Christian Science Monitor, "Best Books of May"

"[Gordon-Reed] offers a thoughtful and affectionate meditation on the state in which, despite its dualities, she still feels most at home. Where others might see a simple picture of unreconstructed racism, Gordon-Reed sees ― and dissects ― complexities that largely defy stereotypes. In so doing, she makes On Juneteenth an important part of the discussion about who and what we are as 21st-century Americans.... Gordon-Reed brings her substantial intellect to this intimate exploration of her home state."
― Eugene L. Meyer, Washington Independent Review of Books

"As Juneteenth morphs from a primarily Texan celebration of African American freedom to a proposed national holiday, Gordon-Reed urges Texans and all Americans to reflect critically on this tangled history. A remarkable meditation on the history and folk mythology of Texas from an African American perspective."
― Lesley Williams, Booklist, starred review

"This beautifully written memoir makes the case that the history of Black Texas is central to the history of the United States. Gordon-Reed’s writing will move all readers of U.S. history."
― Kate Stewart, Library Journal, starred review

"Pulitzer-winner Gordon-Reed (The Hemingses of Monticello) interweaves history, politics, and memoir in these immersive and well-informed essays reflecting on the history of Juneteenth.... Despite the thorny racial history, Gordon-Reed expresses a deep fondness for her native state, writing that 'love does not require taking an uncritical stance toward the object of one’s affections.' This brisk history lesson entertains and enlightens."
― Publishers Weekly

From the Back Cover

“Annette Gordon-Reed has broken a path into territory that has hitherto eluded historians.” ―Edmund S. Morgan

“If this country has a modern Shakespeare looking for material, Gordon-Reed has provided it.” ―David W. Blight

Annette Gordon-Reed is the Carl M. Loeb University Professor at Harvard University. The author of Pulitzer Prize–winning The Hemingses of Monticello, she lives in New York and Cambridge.