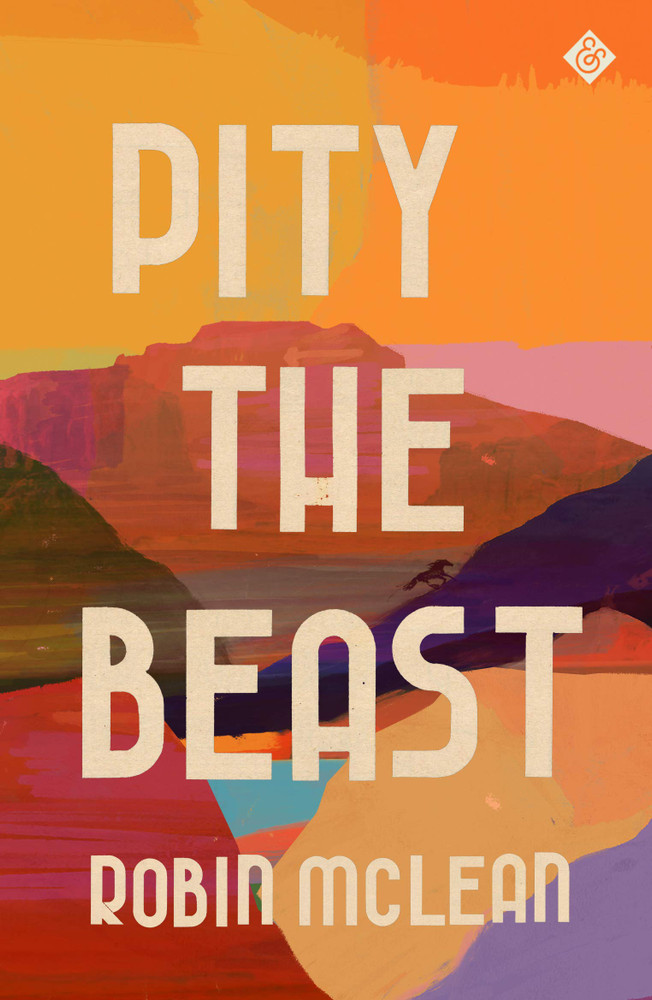 Following in the footsteps of such chroniclers of American absurdity as Cormac McCarthy, Joy Williams, and Charles Portis, Robin McLean’s Pity the Beast is a mind-melting feminist Western that pins a tale of sexual violence and vengeance to a canvas stretching back to prehistory, sideways into legend, and off into a lonesome future.

Millennia ago, Ginny’s family ranch was all grass and rock and wild horses. A thousand years hence, it’ll all be peacefully underwater. In the matter-of-fact here and now, though, it’s a hotbed of lust and resentment, and about to turn ugly, because Ginny’s just cheated on her husband Dan with the man who lives next door.

Out on these prairies, word travels fast: everyone seems to know everyone’s business. They know what Ginny did, and they know Ginny isn’t sorry. She might not be proud of what she’s done, but she doesn’t regret it either. To be honest, she enjoyed the hell out of it, and as far as Ginny is concerned, that should be the end of the story. Problem is, no one else seems able to let it go. The community can’t bear to let a woman like Ginny off the hook. Not with an attitude like hers.

With detours through time, space, and myth, not to mention into the minds of a pack of philosophical mules, Pity the Beast heralds the arrival of a major new voice in American letters. It is a novel that turns our assumptions about the West, masculinity, good and evil, and the very nature of storytelling onto their heads, with an eye to the cosmic as well as the comic. It urges us to write our stories anew―if we want to avoid becoming beasts ourselves.

“Not since Faulkner have I read American prose so bristling with life and particularity.” ―J M Coetzee

“Pity is in short supply in Pity the Beast, but compassion is not: set in the kind of country in which plows break against hidden rocks and running water is a girl sprinting with a bucket, it’s a revenge narrative that never loses sight of the power of empathy, a love song to all of those animals domesticated for our support, a startlingly open-minded meditation on good and evil, a how-to manual on survival in the wilderness, a primer on how to negotiate all of the blind and ruthless violence we’re forced to face in a world formed by trauma, and a passionate celebration of those small comforts that can and do get us through.” —Jim Shepard, author of The Book of Aron and You Think That’s Bad

“McLean doesn’t shrink the world down to interpersonal conflict, but instead opens it up to achieve a cosmic perspective that somehow feels both dispassionate and compassionate (Chekhov’s trick). This opening up is wild, surprising, and not a little frightening. I suppose you could call these stories dark, but in their dazzling perspective I find them full of vitality and wonder.” —The Paris Review Daily

“Mythic in scope and vision, ingenious in form and style, Pity the Beast is a magnificent work of art by a fearless and utterly original writer. I read it with wonder and terror, exhilaration and admiration.” —Chris Bachelder

“Robin McLean’s gonna get you. She will take you out into deep, and then deeper, water.” —Noy Holland

“Robin McLean sees the world like no one I’ve ever read before.  In Pity the Beast, her exacting eye gives us human behavior in all of its beastliness while simultaneously reminding us that it’s not moral judgment that ugliness calls for, it’s even more careful attention.  McLean insists that if we face the worst of ourselves, and if we find some way to articulate what we see, we may emerge battered but filled with a compassion we didn’t know we had, and didn’t know we needed.” —Karen Shepard

“Robin McLean writes scenes that feel as vibrant, terrifying, and wondrous as your most adrenalized memories. Her country is never merely the backdrop for human dramas but a living, breathing entity, alive with the poetry of mules and skittering stone. Pity the Beast is a thrilling ride and McLean's world feels so real that every cloud and creature in it casts a shadow.” —Karen Russell

“Harrowing, gripping, the product of a deranged mind, Robin McLean’s Pity the Beast is a brutally gorgeous fever-dream of a novel. This metaphysical Western feels like something new.” —Sabina Murray

“Not since I stood in a Washington D.C. bookstore back in 1992 to read the first few pages of All the Pretty Horses, have I known so quickly and surely that I was in the hands of a writer whose skills and sensibilities soared in a direction both thrilling and foreign to me at the same time. But where Cormac McCarthy uses his gifts to solidify the west we have always known – men on the edge, defining and redefining freedom – Robin McLean turns the tables on him (and us) by putting a woman in charge. Though Pity the Beast is, through and through, a feminist novel, however, there isn’t a sentence in it that preaches, not a word that calls attention to its political undercurrents. Robin McLean may be a literary newcomer, but in years to come we might be calling her a literary master.” —Richard Wiley

“Here is a novel that sets the species down in its proper plain place: talking animal.  Late Bloomer to the Big Window.  Robin McLean is unafraid of the grand scale, wary of the luxury of mercy.  I read Pity the Beast ravenously, stunned by its savage and glorious turns. ” —Noy Holland

“Like any western worth its salt, Pity the Beast abounds in fiction’s elementals: muck and dirt and dust; flies and fire and shit; spirits both mythical and distilled; and, of course, fucking. McLean is a writer of the hard-scrabbled sacred and well-perfumed profane, and her grotesques cry out from their place there on the page. Behold, the heiress to Cormac McCarthy—her pen to the old man’s throat, her prose blood-speckled and sun-splattered and all her own.” —Hal Hlavinka, Community Bookstore, Brooklyn

Robin McLean worked as lawyer and then a potter for fifteen years in the woods of Alaska before receiving her MFA at UMass Amherst. Her story collection Reptile House won the 2013 BOA Editions Fiction Prize and was twice a finalist for the Flannery O’Connor Short Story Prize.