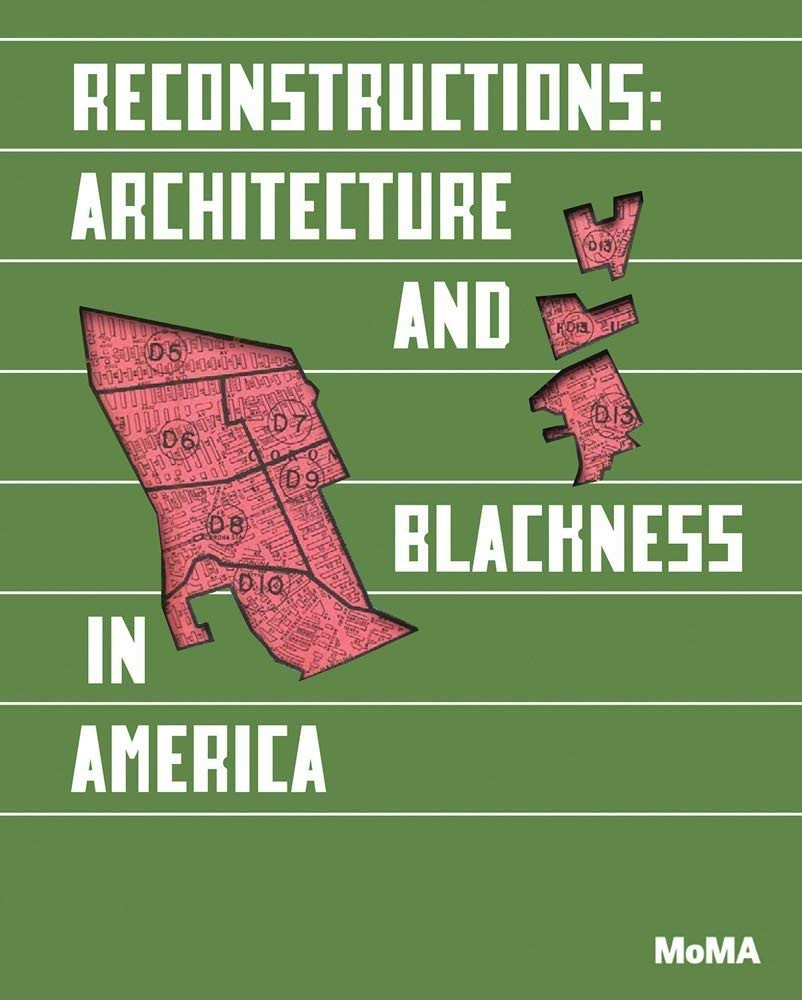 Reconstructions: Architecture and Blackness in America

Reconstructions: Architecture and Blackness in America is an urgent call for architects to accept the challenge of reconceiving and reconstructing our built environment rather than continue giving shape to buildings, infrastructure and urban plans that have, for generations, embodied and sustained anti-Black racism in the United States.

The architects, designers, artists and writers who were invited to contribute to this book―and to the exhibition at the Museum of Modern Art for which it serves as a “field guide”―reimagine the legacies of race-based dispossession in 10 American cities (Atlanta; Brooklyn, New York; Kinloch, Missouri; Los Angeles; Miami; Nashville; New Orleans; Oakland; Pittsburgh; and Syracuse) and celebrate the ways individuals and communities across the country have mobilized Black cultural spaces, forms and practices as sites of imagination, liberation, resistance, care and refusal.

A broad range of essays by the curators and prominent scholars from diverse fields, as well as a portfolio of new photographs by the artist David Hartt, complement this volume’s richly illustrated presentations of the architectural projects at the heart of MoMA’s groundbreaking exhibition.

Whether mapping sites of non-violent protests or grappling with the architectural history of African diaspora communities, “Reconstructions: Blackness in America” looks to continue the essential work of unpacking systemic racism in the built environment. And, in the process, imaging a more just and inclusive path forward. -- Evan Pavka ― AZURE

Reconstructions: Architecture and Blackness in America,”... explore[s] the ways space and land are apportioned and navigated. Using a combination of analog and digital collage, the [book] depicts dystopian [cities] overtaken by climate change and explores “vanishing urban ephemera and architecture""...succumbing to gentrification. -- Editors ― Surface

Space, land, the ways each are apportioned and navigated―these are the central concerns of “Reconstructions,” which includes multidisciplinary work by 10 Black talents, among them artist Amanda Williams and AD100 landscape architect Walter Hood, as well as photography created by David Hartt in response... “It is architecture that is not specifically about buildings, but about how the architecture of certain spaces is emblematic of anti-Black racism.” -- Camille Okhio ― Architectural Digest

The Black Reconstruction Collective (BRC) is committed to multi-scalar and multi-disciplinary work dedicated to dismantling systemic white supremacy and hegemonic whiteness within art, design, and academia.The BRC provides funding, design, and intellectual support to the ongoing and incomplete project of emancipation for the African Diaspora. ― PIN-UP

Posing the thought-provoking question, “How does race structure America’s cities?” this [book] focuses on the intersection of architecture, design, and Black space and the history of injustice in the built environment. Exercises in reinvention, re-imagination and liberation, 10 case studies addressing structural and anti-Black racism are on view. -- Victoria Valentine ― Culture Type

[Reconstructions: Architecture and Blackness in America] look[s] at contemporary architecture and its role in the systemic racism that has facilitated discrimination and injustice in the U.S. A system that has informed and continues to inform the design of American cities through public policies, municipal planning, and architecture that has specifically impacted the Black community. -- Sean Joyner ― Archinect

Unearths the ways in which systemic racism has shaped architecture and how an unexamined whiteness has served as a default in the field. More important, the exhibition ― and its very worthwhile catalog ― presents myriad architectural possibilities framed by the Black experience. -- Carolina Miranda ― Los Angeles Times

Examines the intersections of architecture, Blackness and anti-Black racism, as well as contemporary architecture in the context of how systemic racism has fostered violent histories of discrimination and injustice in the U.S. -- Kelly Beall ― Design Milk

All of these projects reimagine architecture from the perspective of Black people, a mission of the collective ― and a first for the Modern. [...] Which is to say, the Modern itself partly necessitated the Black Reconstruction Collective. The group addresses the bigger question: How can Blackness construct America? -- Michael Kimmelman ― New York Times

If architecture can be a “vehicle of liberation and joy,” as the statement claims, then the work in [this book] soars especially when it sets aside the instrumental potential of architecture in favor of speculative investigations of Black presents, pasts, and futures. -- Jay Cephas ― Artforum

Reconstructions: Architecture and Blackness in America” is undoubtedly a feat that will be celebrated for years to come. The evolution of the scholarship and archival practices on Black space, the opportunity for healing for those impacted by both the violence of city planning and by fascist curation, and an all-around enriching viewing experience made the visit well worth it. You can feel the labor of love in every corner of its maybe-too-small holding space within the womb of the MoMA. It is a show that left me hungering for so much more ― hungering for a better spatial awareness of America, this land which my people did not choose to inhabit, and hungering for a deeper connection with each artist in the exhibition. This show markedly changed me. Commuting home to Bushwick, I thought about every piece of city infrastructure I interacted with, from the subway railings I held to the electric lines crossing above my head. I had been awakened to the fact that we should never take infrastructure for granted. -- Kimberly Drew ― Curbed

Providing this new venue for Black architects is filling a hole, but it’s also opening up the potential for new forms of architecture and design thinking that may not otherwise have emerged. -- Nate Berg ― Fast Company

Though it may be invisible to some, racial segregation, separation, and violence form the framework of the American built environment, and Reconstructions unveils it and then casts it aside to make room for more just and poetic alternatives. -- Stephanie Rogers ― Dornob

The [book], which takes its name from a W.E.B. Du Bois essay about reconstruction in America, situate[s] itself as a continuation in the larger project of liberation for Black people. -- Diana Budds ― Curbed

Reconstructions proposes a wild imagining in order to push the viewer to engage with an expanded history of architecture. But it does not quite offer enough remove from that history to allow the viewer to envision another world. However, in its many cartographic gestures, a savvy audience may find the map to one. -- Jess Myers ― Architect's Newspaper

Reconstructions asks not for full comprehension or memorization, but puts forth the question of what it would take to move beyond presumptions that these architectural interventions are too speculative or verging on the fantastical[...] Reconstructions present these possible futures not as provisional but rather as vital concerns worth pondering. -- Sinclair Spratley ― Hyperallergic

Supplements [the exhibit's] propositions with texts by prominent scholars and critics that give the project an open feel and cross-disciplinary weave. -- Siddhartha Mitter ― New York Times

Architecture and Anarchism: Building Without Authority