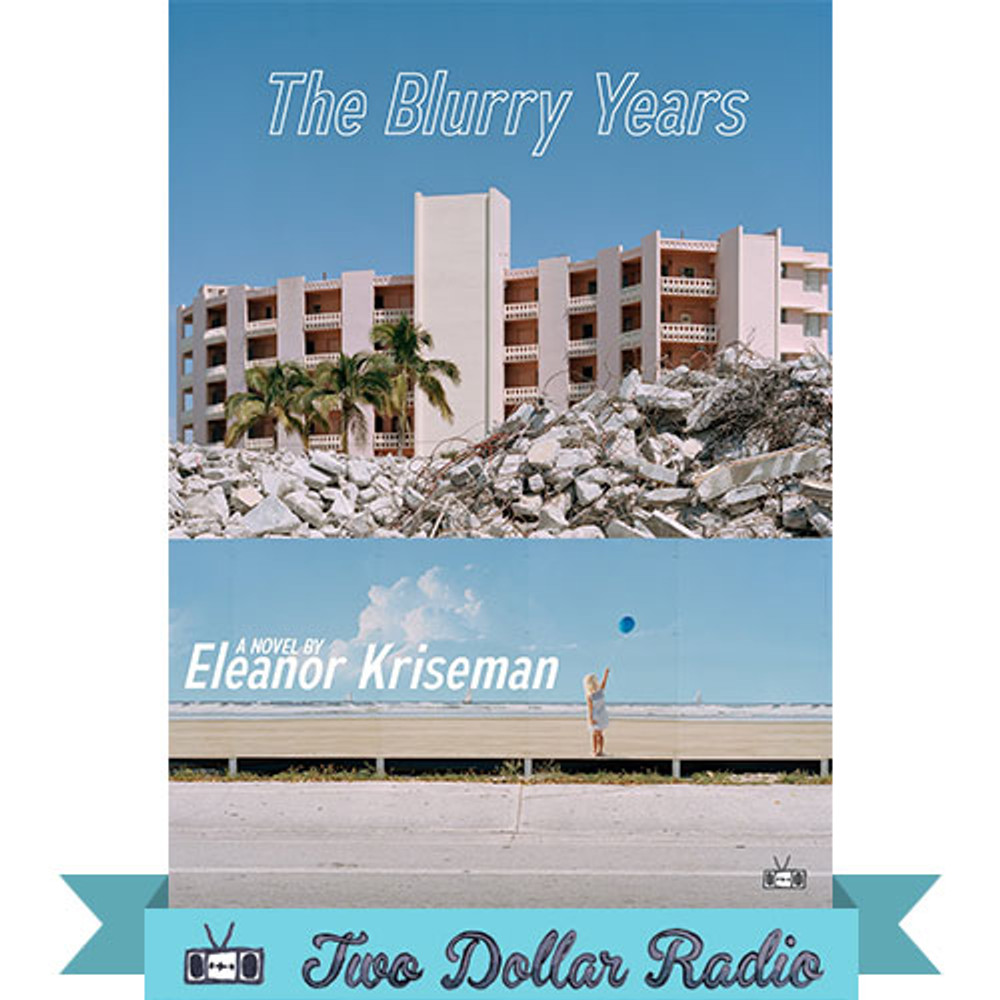 The Blurry Years is a powerful and unorthodox coming-of-age story from an assured new literary voice, featuring a stirringly twisted mother-daughter relationship, set against the sleazy, vividly-drawn backdrop of late-seventies and early-eighties Florida.

Callie—who ages from six to eighteen over the course of the book—leads a scattered childhood, moving from cars to strangers’ houses to the sand-dusted apartments of the tourist towns that litter the Florida coastline.

Callie’s is a story about what it’s like to grow up too fast and absorb too much, to watch adults behaving badly; what it’s like to be simultaneously in thrall to and terrified of the mother who is the only family you've ever known, who moves you from town to town to leave her own mistakes behind.

With precision and poetry, Kriseman's moving tale of a young girl struggling to find her way in the world is potent, and, ultimately, triumphant.

"The painful pleasure of this slim work is that it treats Callie’s various leaps toward adulthood—whether via the faintly sweet doldrums of everyday life or the extreme episodes that will forever stick with her—with equal care."
—Jane Yong Kim, The Atlantic

“Not simply another coming of age novel, The Blurry Years has a momentum not simply driven by narrative but by a combination of place (Florida itself is a vital character) and voice. Kriseman brings Cassie to life on the page, finding in her journey the story of a life coming into its own and freeing itself of the past. It is a shimmering evocation of adolescence and marks the unveiling of an exciting new voice.”
—John Toews, McNally Robinson Booksellers

"A languorous, melancholy slip of a novel, Eleanor Kriseman's The Blurry Years recalls the equally composed and sharply incisive works of authors like Ann Nietzke and Laurie Colwin... her debut reveals a wealth of depth and keen observations."
—Imran Khan, PopMatters

"In The Blurry Years, readers are thrust into the wild and unfair life of Callie. The complexity of the language grows as Callie ages and paints a heartbreaking picture of addiction, neglect, and self destruction. The story dissolves more so than resolves but leaves readers desperate and full of something that feels like hope. Fans of Janet Finch's White Oleander will love this."
—Jordan Arias, Anderson's Bookshop

"The Blurry Years, a debut novel by Eleanor Kriseman, is the kind of coming-of-age tale that we need... Callie is a heroine to remember, a perfect personification of the era of adolescence when decisions were easily made and long regretted."
—The Masters Review

"An elegant... glimpse into the life of a memorable protagonist."
—Kirkus Reviews

“The Blurry Years is skillfully unsettling in its unfiltered look at a girl simmering in ongoing crises over which she has no control... Kriseman packs a perfect punch in a small package."
—Shelf Awareness

“Kriseman’s assured and affecting debut follows Callie from young childhood through her itinerant teenage years as she and her unpredictable, alcoholic mother, Jeanie, constantly attempt to restart and better their lives... The novel’s complicated mother/daughter relationship is provocative and richly developed, and Jeanie is an unforgettable, complex character... Kriseman’s is a new voice to celebrate.”
—Publishers Weekly

"With the first lines of The Blurry Years, Eleanor Kriseman pulls us right into its young narrator’s world."
—Tampa Bay Times

"The Blurry Years is a well-drawn story of growing up alone with a mother who is absent emotionally yet present physically."
—Hunger Mountain, a publication of Vermont College of Fine Arts

"Kriseman’s The Blurry Years explores Florida in the 1970s and 80s through the lens of young Callie, a girl coming into adulthood. The books lyrical prose details Callie’s coming of age story surrounded by the sleaze and thrill of the Florida coastline. Over the course of Callie’s adolescence, readers follow her relationship with her mother and the complexities of what it means to grow up a woman. Kriseman sat down with Culture Trip to discuss her book and Florida as the rich setting for her work."
—Culture Trip (read the full interview here!)

"The Blurry Years is taboo and painful and utterly brilliant; Kriseman’s prose is aflame with necessity. This novel’s complex, razor-sharp inquiry of questions surrounding predation and consent could not be more essential. It’s a ferociously difficult triumph from start to finish."
—Alissa Nutting, author of Made for Love and Tampa

"The Blurry Years is a tender howl of a novel, an ode to the kinetic tumult of youth; the fraught intimacy between mother and daughter; and the quest for a place to call home. Eleanor Kriseman is a spectacular new talent. Get ready.”
—Laura van den Berg, author of Find Me

"In Eleanor Kriseman’s fantastic and moving The Blurry Years, we meet Callie, a tender girl who grows up page by page in beautiful, harsh Florida. Kriseman gives us the details of Callie’s life in bright, textured, fearsome detail, as if she is dealing a gorgeous but doomed tarot. In the end I was left with an ache I cherish, the way a Florida sunburn reminds one that there is skin there after all.
—Lindsay Hunter, author of Eat Only When You’re Hungry

"Eleanor Kriseman’s beautiful novel The Blurry Years is one of the best and truest portrayals of what it’s like to grow up with an alcoholic parent I’ve ever read. Her heroine Cal is smart and watchful and vulnerable, with a voice that’s all her own. This is a striking debut from a writer to watch."
—Alix Ohlin

"This book is a treasure: a piercing, aching slice of adolescence, and a rare piece of storytelling that captures what it's like to be wise beyond your years, but not wise beyond your circumstances. Kriseman crafts the sort of characters who become like family, who linger on in the reader's mind long after the book is done."
—Alexandra Kleeman, author of You Too Can Have a Body Like Mine and Intimations

"Eleanor Kriseman's young protagonist provides a first-hand field report
from a childhood spent as hostage to a mother awash in alcohol and
narcissism. The Blurry Years breaks the reader's heart."
—Carol Anshaw, author of Carry the One and Lucky in the Corner Eleanor Kriseman is a social worker in New York City. She was born and raised in Florida.

A Year In The Wilderness