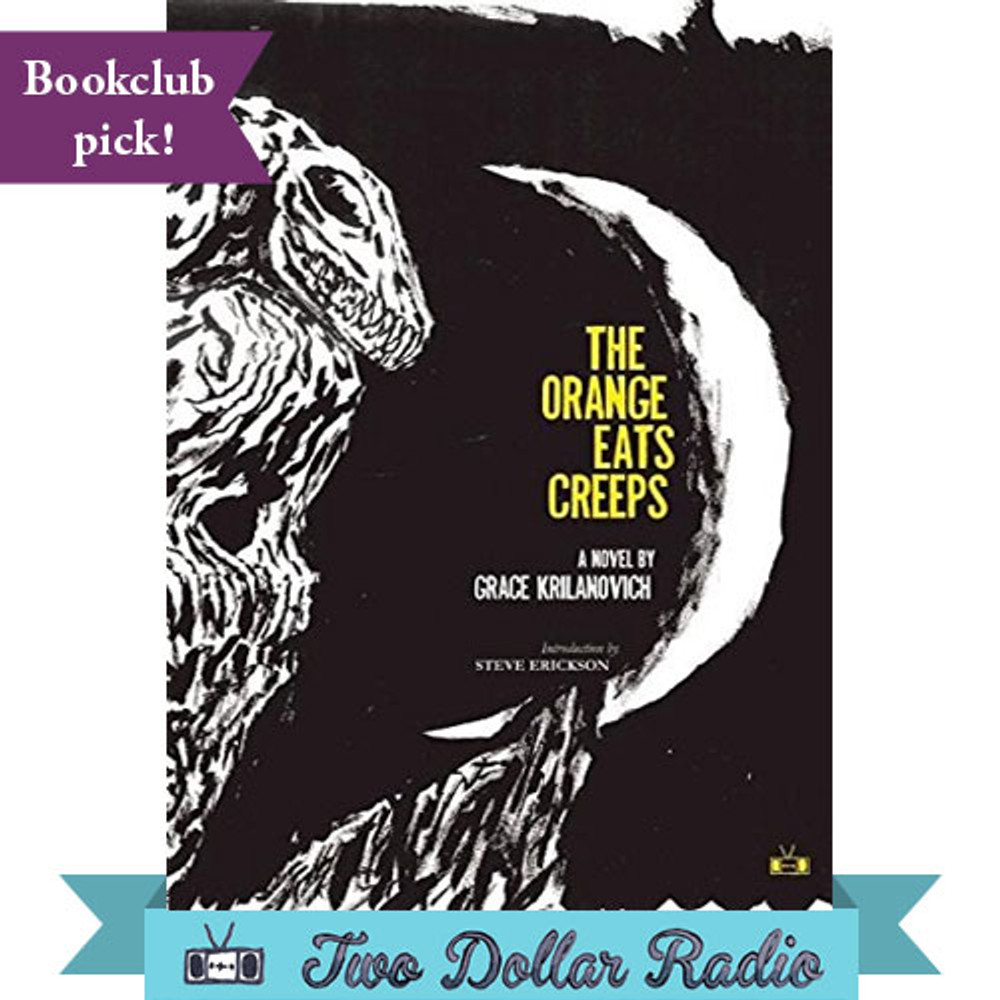 This title is the March 2019 pick for the FEMINIST SCI-FI BOOKCLUB! Find out more here.

A girl with drug-induced ESP and an eerie connection to Patty Reed (a young member of the Donner Party who credited her survival to her relationship with a hidden wooden doll), searches for her disappeared foster sister along “The Highway That Eats People,” stalked by a conflation of Twin Peaks’ “Bob” and the Green River Killer, known as Dactyl.

"The book feels written in a fever; it is breathless, scary, and like nothing I've ever read before. Krilanovich's work will make you believe that new ways of storytelling are still emerging from the margins."
―NPR

"Grace Krilanovich’s first book is a steamy cesspool of language that stews psychoneurosis and viscera into a horrific new organism—the sort of muck in which Burroughs, Bataille, and Kathy Acker loved to writhe."
—The Believer

"This is the number one book I have purchased for friends and family, have recommended, have quoted, have furiously dog-eared, underlined, and marked up. This is a book with a heart that pulses, and while you’re not going to get a sense of arc or resolution, that’s the point—that’s the horror. Krilanovich leaves you stranded in a ghostly ocean of beautiful, yet alienating, lyrical syntax."
—Kia Groom, Quaint Magazine

"Rimbaud, Huysmans, Kiernan—they're all in there, along with a very dark and satisfyingly malevolent sense of humor... The real and the phantasmagorical combine in a chemical reaction."
—Omnivoracious

"A relentless existential nightmare as baffling as it is brilliant. Krilanovich dispenses with so many writing norms that the reader is required to figure out a new way to read. It's a thrilling ride."
—Shelf Unbound Magazine

"This one is a must read."
—Black Book

"One of the more interesting literary experiences in recent times. The Orange Eats Creeps is sure to make an impression."
—The Cult

"I know this will be a book I read again and again over the years; it will not be artifice on my shelf, it will be a space."
—Blake Butler, The Nervous Breakdown

"The Orange Eats Creeps contains the hallucinatory, disjointed, plotless, yet bizarrely charming ravings of a young refugee from foster care who now belongs to a pack of teenage hobo vampires that rove convenience stores and supermarkets high on Robitussin and mop buckets of coffee. These feral, trashed-out bloodsuckers have nothing to do with the Twilight crowd, devoid as they are of sex appeal or commercial potential."
—Newsday

"This novel is like notorious punk-rocker GG Allin showing up at a Green Day concert. Krilanovich build[s] characters that most other first-time novelists wouldn't dare attempt, and she writes it all in unrestrained profane language that you wouldn't expect from someone garnering serious mainstream praise. [The Orange Eats Creeps is a] nervy novel. This is fiction defined by its distaste for moderation."
—The Dominion

"Beautiful and deranged. [Krilanovich] nails the shaky worldview of a supernatural teen narco-insomniac... Being undead, here, is the defining paradox of the teenage female experience: to be both immortal and rapidly aging."
—Bookforum

"Grace Krilanovich's The Orange Eats Creeps rewrites both the vampire novel and fiction in general. Come[s] close to performing a lobotomy on the reader. Screams with a post-punk adrenaline, like Nightwood on really bad acid."
—21c Magazine

"If Black Hole is a mythology of adolescence in Seattle in the 1970s, then Krilanovich's book picks up the reins twenty years later, only slightly to the south in central Oregon. By the end, Krilanovich's narrator has encountered and embraced her own personal form of hell, which in its horror also contains a great beauty."
—The Millions

"[The Orange Eats Creeps is] raw and seething. It snatches up the reader and doesn't let go until the surprising twist at the end, which is perhaps the most frightening part of the book. The result is a creepy uneasiness and an impulse to look over your shoulder."
—The Brooklyn Rail

"Excellent. It is a slippery novel. It will never lay still and compromising in your hands. Language charges this book. It provides regular reward from one sentence to the next."
—The Collagist

"A hallucinatory deluge, a place where the present and the past are in constant flux, where the mundane and the fantastic bleed into one another. Like Brian Evenson, Krilanovich borrows certain tropes from horror fiction, but the terror she's after is a much more elemental one: the loss of self, the question of identity, and the demolition of what could be considered real."
—Flavorwire

"[Krilanovich's] novel shares a disorienting quality with... Brian Evenson's The Open Curtain. And in the end, the most resonant pit-of-your-stomach dread doesn't come from a roadside killer or fangs poised above a neck. Instead, its a much simpler scene, something rooted in mundane indifference that brings this novel to its unexpectedly domestic and achingly painful conclusion."
—Vol. 1 Brooklyn

"Amazing. Truly lives up to its hype: it's enormous and insane and magic."
—Blake Butler, HTML Giant

"The year's most horrifying novel. This postmodern gem is both intense and surreal, and one of the most spectacular debuts I have read in a long time."
—Largehearted Boy

"A pretty incredible read."
—The Rumpus

"For some the intensity and boldness may be a shock, for the rest of us the exhilaration of such a novel is nearly beyond calculation. If a new literature is at hand then it might as well begin here."
—Steve Erickson

"Like something you read on the underside of a freeway overpass in a fever dream. The Orange Eats Creeps is visionary, pervy, unhinged. It will mess you up."
—Shelley Jackson

"Wandering back and forth between the waste spaces of the Northwest and the dark recesses of its narrator's mind, The Orange Eat Creeps reads like the foster child of Charles Burns' Black Hole and William Burroughs'Soft Machine. A deeply strange and deeply successful debut."
—Brian Evenson

Grace Krilanovich (Author): Grace Krilanovich is a graduate of the California Institute of the Arts, where she received her MFA. She has been a finalist for the Starcherone Prize, has been nominated for a Pushcart Prize, published in Black Clock, and a fellow of the MacDowell Colony. The Orange Eats Creeps is her first novel.