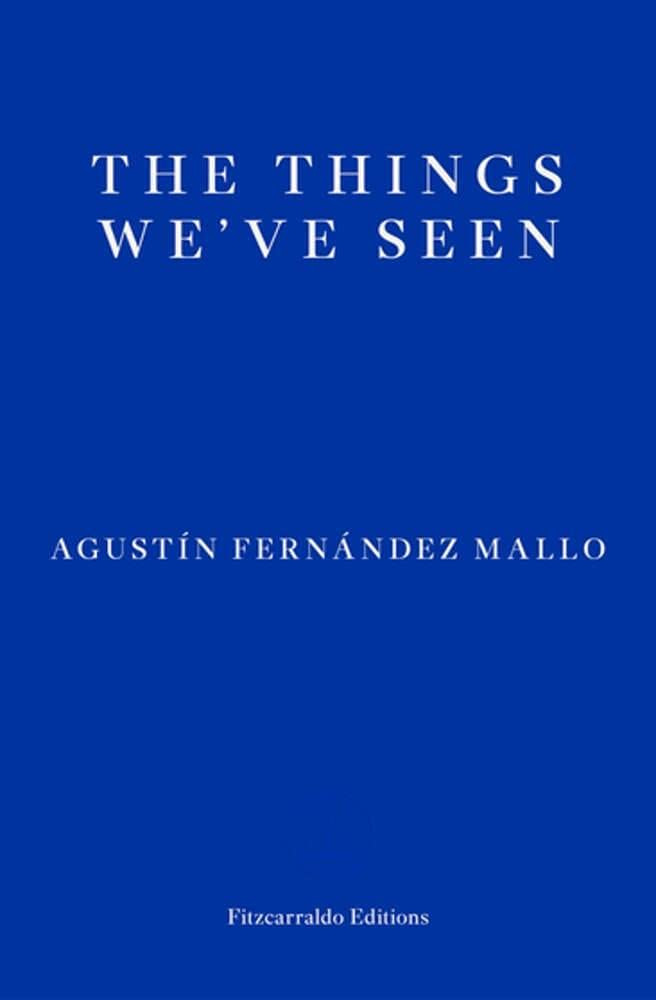 Written in three parts, The Things We've Seen is a dazzling and anarchic exploration of social relations which offers thought-provoking ideas on our perceptions of humanity, history, violence, art and science. The first part follows a writer who travels to the small, uninhabited island of San Simon, where he witnesses events which impel him on a journey across several continents, chasing the phantoms of nameless people devastated by violence. The second book is narrated by Kurt, the fourth astronaut who secretly accompanied Armstrong, Aldrin and Collins on their mythical first voyage to the moon. Now living in Miami, an ageing Kurt revisits the important chapters of his life: from serving in the Vietnam War to his memory of seeing earth from space. In the third part, a woman embarks on a walking tour of the Normandy coast with the goal of re-enacting, step by step, the memory of another trip taken years before. On her journey along the rugged coastline, she comes across a number of locals, but also thousands of refugees newly arrived on Europe’s shores, whose stories she follows on the TV in her lodgings.

‘With the tools of a scientist and the nose of a poet, Fernández Mallo dissects the materials he finds anywhere and everywhere (libraries and garbage dumps, real cities and virtual realities, audiovisual archives and personal memories) to construct, from these fragments, thoughts, and classifications, collages that could only be the fruit of illogic, dreams, accidents.’
― Jorge Carrión, 4Columns

‘It is in these pages that we see a strange and original sensibility at work – one that combines a deep commitment to the possibilities of art with a gonzo spirit and a complete absence of pretention – and get the chance to spend some intimate time in its company.’
― Christopher Beha, Harper's

‘To call the works that comprise Agustín Fernández Mallo’s Nocilla Trilogy wide-ranging wouldn’t be inaccurate, but it would miss the mark in terms of just how much these books manipulate and revise concepts of language and narrative. They fall somewhere between Ben Marcus’s The Age of Wire and String and Olga Tokarczuk’s Flights in their unpredictability, their sense of risk, and the utter joys that can arise from reading them.’
― Tobias Carroll, Lit Hub

‘An encyclopedia, a survey, a deranged anthropology. Nocilla Dream is just the cold-hearted poetics that might see America for what it really is. There is something deeply strange and finally unknowable to this book, in the very best way – a testament to the brilliance of Agustín Fernández Mallo.’
― Ben Marcus, author of The Flame Alphabet

Agustín Fernández Mallo was born in La Coruña in 1967. He is a qualified physicist and since 2000 has been collaborating with various cultural publications in order to highlight the connection between art and science. His Nocilla Trilogy, published between 2006 and 2009, brought about an important shift in contemporary Spanish writing and paved the way for the birth of a new generation of authors, known as the ‘Nocilla Generation’. He has also published a book of stories, El hacedor (de Borges), remake, and the essay Postpoesía, hacia un nuevo paradigma. His poetry is collected in the volume Ya nadie se llamará como yo + Poesía reunida (1998-2012) and his latest novel, Limbo, was published in Spain in 2014.

Thomas Bunstead is a writer and translator based in East Sussex. He has translated some of the leading Spanish-language writers working today, including Yuri Herrera, Enrique Vila-Matas, and Juan Villoro, and his own writing has appeared in The White Review and the Times Literary Supplement. He is an editor at the translation journal In Other Words.

Men Explain Things to Me