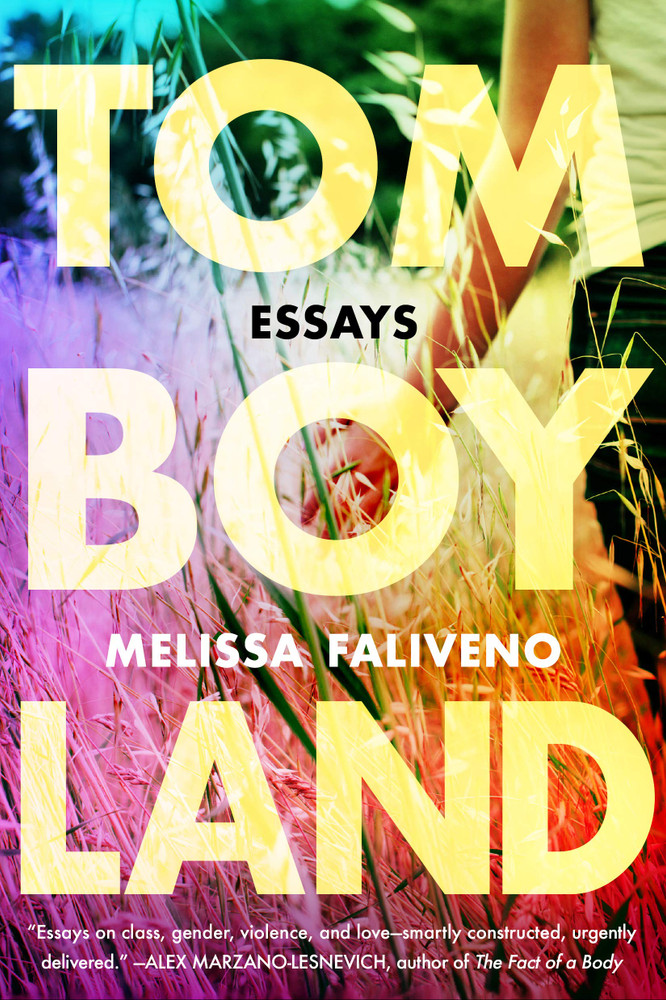 A fiercely personal and startlingly universal essay collection about the mysteries of gender and desire, of identity and class, of the stories we tell and the places we call home.

Flyover country, the middle of nowhere, the space between the coasts. The American Midwest is a place beyond definition, whose very boundaries are a question. It’s a place of rolling prairies and towering pines, where guns in bars and trucks on blocks are as much a part of the landscape as rivers and lakes and farms. Where girls are girls and boys are boys, where women are mothers and wives, where one is taught to work hard and live between the lines. But what happens when those lines become increasingly unclear? When a girl, like the land that raised her, finds herself neither here nor there?

In this intrepid collection of essays, Melissa Faliveno traverses the liminal spaces of her childhood in working-class Wisconsin and the paths she’s traveled since, compelled by questions of girlhood and womanhood, queerness and class, and how the lands of our upbringing both define and complicate us even long after we’ve left. Part personal narrative, part cultural reportage, Tomboyland navigates midwestern traditions, mythologies, landscapes, and lives to explore the intersections of identity and place. From F5 tornadoes and fast-pitch softball to gun culture, strange glacial terrains, kink party potlucks, and the question of motherhood, Faliveno asks curious, honest, and often darkly funny questions about belonging and the body, isolation and community, and what we mean when we use words like woman, family, and home.

One of the Best Books of 2020, according to NPR, Electric Literature, the New York Public Library, and Debutiful

“[A] winning debut collection…Readers who prefer to answer their questions about gender and sexuality with more questions will appreciate this perceptive meditation.” —Publishers Weekly (starred review)

“Delves deeply into gender identity and the many confusions and complications involved…Throughout the collection, Faliveno remains inquisitive and resistant to labels, always maintaining her empowering agency…the essays are well-rendered investigations of self-identity. An expressive voice evolving deliberately, resisting having to be one thing or the other.” —Kirkus Reviews

“Encountering Faliveno is a pleasure…a sensitive commentator on the topsy-turvy world of the gender systems she grew up in and an exquisite self-analyst of her own androgyny…writing with a quality of cinematic vividness…Recommended.” —Library Journal

“Together, the essays offer a full-dress portrait of a writer whom most readers will be intrigued to know.” —Booklist

“Melissa Faliveno transports readers to the Midwest, a region of the country that, not unlike the idea of a ‘tomboy,’ resists neat categorization. The book blends personal essays with culture reporting to explore the liminal spaces Faliveno—and so many other queer folks—inhabit and navigate each and every day.” —NewNowNext

“In this essay collection about identity, class, sex, and gender, you’ll find deeply personal revelations that anyone can connect with. Each essay offers a unique perspective on topics we’ve all thought about, whether we’re a tomboy from the suburbs, a straight mountain man, or anything in between. Because there is no binary.” —Electric Literature

“Gender, class, geographic placing, and so much more are explored honestly and fully in this collection of essays.” —Vogue.com

“These essays are a love letter to, reckoning with, and examination of [Faliveno’s] midwestern upbringing…Faliveno doesn't always definitively answer the questions she asks—and after all, how could she, when existential issues of identity, belonging, language, and the body are rarely if ever static—but she does manage to get satisfyingly close…to have roots, Tomboyland seems to be saying, is to have the ability to grow upward, out, and sometimes away, but to always have a context to return to.” —NPR.org

“The book is a love letter to the Midwest, celebrating its strength and complexities.” —Wisconsin Public Radio

“Faliveno is an excellent essayist, expertly braiding seemingly disparate threads into engrossing and funny explorations of self and society…The theme of violence intertwined with fear, love and reverence for place and created family propels Tomboyland into captivating territory. On the surface, its beautiful prose belies the darker complexities it scrapes at, making it all the more gratifying to read.” —The Washington Post

“[A] wide-ranging, triumphant debut essay collection. With tenderness and honesty, Faliveno explores boundaries, intersections, and the overall blurriness of life.” —The Millions

“Faliveno expertly braids memories of her upbringing with interviews and research to render Wisconsin a living, breathing thing…[a] willingness to sit with difficult questions and recognize the self as variable echoes across the whole book…Tomboyland is a strong, vulnerable debut. Melisssa Faliveno hones a singular style of interlinked optimism in her essays, which paint Wisconsin as a place of immense, ancient histories and a place with hopes for great change in a shifting world. Her writing would make a native to the region proud of its complexity.” —Harvard Review

“Melissa Faliveno takes each of these binaries in her capable hands and pries them apart in her debut essay collection, Tomboyland, to gripping effect…Faliveno possesses a plainspoken readiness that holds deep nuance under its veneer of straightforward memoir writing.” —Rain Taxi

“Tomboyland is everything I want an essay collection to be: beautiful, smart, difficult, honest, hopeful, and haunting, just like the experiences it depicts. It is a book that charts the history of a body against the land that defines it. It is a song for anyone who felt at once estranged and inextricably bound to a place. Melissa Faliveno has written a gorgeously complex ode to the Midwest that is destined to be passed urgently from hand to hand, an anthem sung by all the misfits in those vast places who have not yet seen themselves written.” —Melissa Febos, author of Whip Smart and Abandon Me

“Tomboyland, Melissa Faliveno’s excellent collection of essays on growing up in Wisconsin and then beyond it, will give many people permission to be who they are and to write into and about where they’re from. It will also show you how and when to leave that place, and how you can’t ever leave it completely. Each essay carries Faliveno’s Wisconsin inside it and made me want to lift weights in a dingy gym, welcome a moth infestation, kick ass at softball, rewatch Twister, and even visit Mount Horeb, the ‘Troll Capital of the World.’ If it can work on me this fast, I can only imagine what this book will do to you.” —Ander Monson, author of I Will Take the Answer and Neck Deep and Other Predicaments

“These essays showcase, via hard-won displays, a twenty-first-century mind working to understand itself. Among the many treats of Tomboyland is how Melissa Faliveno’s self-investigation doesn’t just look inward to memory, experience, or feelings. Over the course of this book, she also looks externally in her quest for personal knowledge—turning to archives, interviews, and journalistic immersion. Such an extensive and dogged scope shows both how unique and how interconnected a single life can be. In Faliveno’s deft hands, we experience all that builds a consciousness—food and sex and softball, dark bars and sprawling landscapes, roller derbies and deep conversations, and the F5 tornado that is human love.” —Elena Passarello, author of Animals Strike Curious Poses

“In these smartly constructed, urgently delivered essays on class, gender, violence, rage, love, and sexuality—issues as entwined in these pages as they are in life—Melissa Faliveno brilliantly scrutinizes our most contemporary, most vital questions of self and culture. I didn’t just read Tomboyland, I scribbled in its pages, photographed its passages, pressed it on friends, and felt an urgent need to talk about it. It will spark conversations that will become conflagrations. Tomboyland is a blaze of a book, as fiery and expansive as the Midwestern sky.” —Alex Marzano-Lesnevich, author of The Fact of a Body

“I felt Melissa Faliveno’s Midwest on a gut level—its F5 tornadoes, its rolling prairies, its bighearted people working their asses off. I grew up here, but it’s okay if you didn’t; Tomboyland will show you, tangling your body in place and the overwhelming need to both go back home and get the hell out. Faliveno’s deeply felt and deeply researched essays—part personal narrative, part cultural criticism—feature softballs and guns, dresses and babies and bondage. They interrogate gender and expectations, what it means to be a family, to build a home in this beautiful mess of a world. My brain is still buzzing. So is my heart.” —Megan Stielstra, author of The Wrong Way to Save Your Life

“In Tomboyland, Melissa Faliveno examines the spaces, selves, histories, and futures that live in the distance between binaries: between the bodies we have and the ones we claim, between the homes that have made us and those we have made for ourselves. This is a remarkable debut. I am grateful for the arrival of this bold new voice.” —Lacy M. Johnson, author of The Reckonings

“Tomboyland works through unlikely juxtaposition—tornadoes alongside God, vegetarianism alongside kink, guns alongside love. It is a coming-of-age story where everything is examined, everything is questioned, where the word driftless is both a region and a state of mind. At one point Faliveno’s mother, while cooking meat, states, ‘If I think about it, then I have to look at my whole life.’ Faliveno takes this as a challenge, as she builds a life for us before our eyes. It is, in the end, about the nature of relationships, of love, of being alive.” —Nick Flynn, author of Another Bullshit Night in Suck City and The Ticking Is the Bomb

Melissa Faliveno is a writer, editor, and teacher. The former senior editor of Poets & Writers Magazine, she has also had essays and interviews appear in BitchMedia’s magazine, the Millions, Prairie Schooner, Isthmus, DIAGRAM, and Midwestern Gothic, among others, and received a notable selection in The Best American Essays 2016. Born and raised in small-town Wisconsin, she currently lives in Brooklyn, New York, and teaches writing at Sarah Lawrence College. Tomboyland is her first book. Learn more at www.melissafaliveno.com.