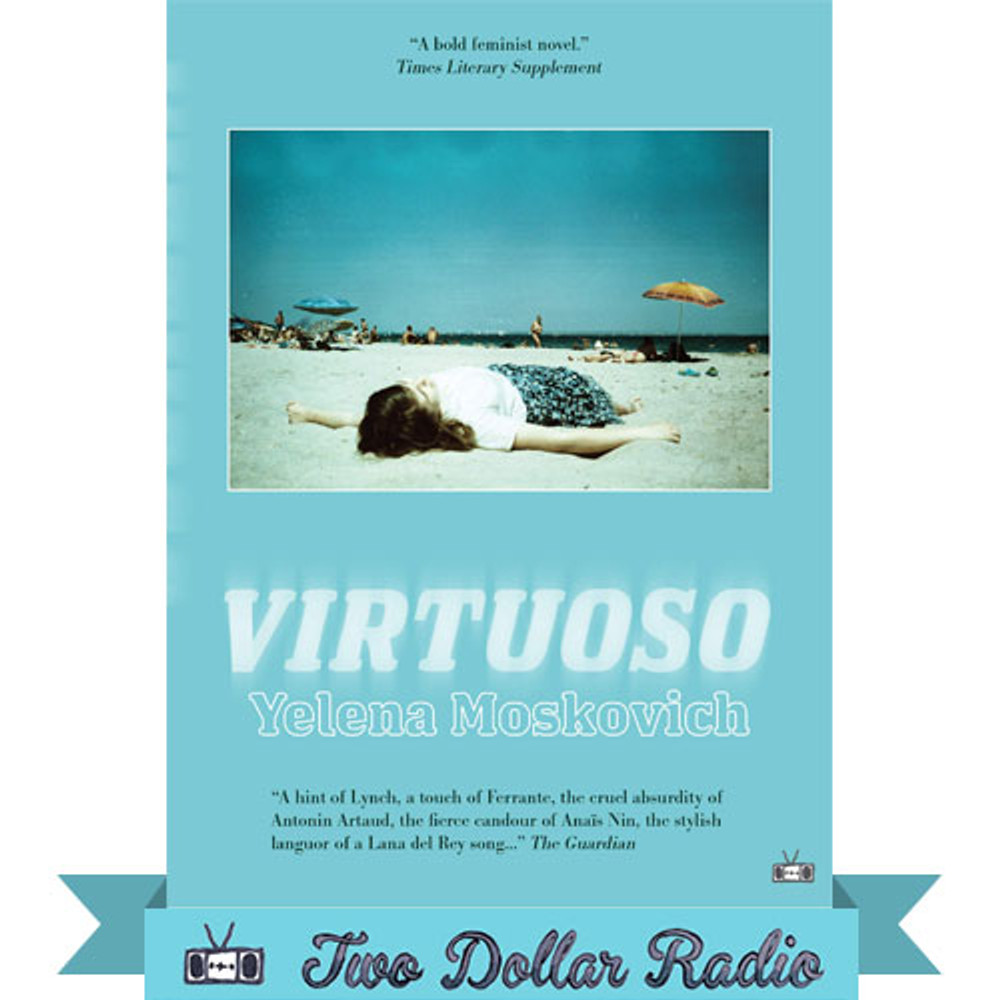 As Communism begins to crumble in Prague in the 1980s, Jana’s unremarkable life becomes all at once remarkable when a precocious young girl named Zorka moves into the apartment building with her mother and sick father. With Zorka's signature two-finger salute and abrasive wit, she brings flair to the girls’ days despite her mother’s protestations to not “be weird.” But after scorching her mother’s prized fur coat and stealing from a nefarious teacher, Zorka suddenly disappears.

Meanwhile in Paris, Aimée de Saint-Pé married young to an older woman, Dominique, an actress whose star has crested and is in decline. A quixotic journey of self-discovery, Virtuoso follows Zorka as she comes of age in Prague, Wisconsin, and then Boston, amidst a backdrop of clothing logos, MTV, computer coders, and other outcast youth. But it isn’t till a Parisian conference hall brimming with orthopedic mattresses and therapeutic appendages when Jana first encounters Aimée, their fates steering them both to a cryptic bar on the Rue de Prague, and, perhaps, to Zorka.

With a distinctive prose flair and spellbinding vision, Virtuoso is a story of love, loss, and self-discovery that heralds Yelena Moskovich as a brilliant and one-of-a-kind visionary.

* Longlisted for the Swansea University Dylan Thomas Prize
"Worth £30,000, it is one of the UK’s most prestigious literary prizes as well as the world’s largest literary prize for young writers. Awarded for the best published literary work in the English language, written by an author aged 39 or under, the Prize celebrates the international world of fiction in all its forms including poetry, novels, short stories and drama." —The Bookseller

"Virtuoso is a novel / is a performance / is a dance with movements and variations / is poetry / is film / is a palette splattered with colors / is a body out of breath. Virtuoso is truly a sensual euphoria, one that must be experienced firsthand."
—Cameron Finch, Michigan Quarterly Review

"Virtuoso didn’t simply engage me on an intellectual level, but also on a deep and emotional one. It’s the kind of art that lives in you and follows you around because of your experience with it. It’s part of you now and, for good or ill, that’s goddamn impressive."
—Joseph Edwin Haeger, The Big Smoke

"Moskovich's novel has more in common with David Lynch's Mulholland Drive than it does with any contemporary piece of writing... Moskovich breaks almost every rule of contemporary fiction."
—Kirkus

"[Virtuoso] tells the stories of four queer European women in a filmic, fragmented style... An unexpected reunion ties together all the stories in an emotionally complex and gratifying ending."
—Publishers Weekly

"Moskovich dwells with indigenous belonging and a native fluency in the realms of the unseen, the worlds slotted between worlds, or behind them, a fluttering geography of veils calling for mirrors, or perhaps for the abolition of mirrors."
—John Biscello, Riot Material Magazine

"Virtuoso jumps through time involving three pairs of sapphic women, ranging from childhood friends. marriage, and scandal. The paths of these women sync and blend together like waves, written in an almost abstract form. These are loves intertwined with melancholy and mystery. I will admit sometimes I'm not at all sure what is going on, but nevertheless, I was engaged in its format. As their stories unfold, you may feel like rereading again and again to put together all the pieces."
—Andrew King, University Bookstore (Seattle, Washington)

"With incredible characters and sharp narration, Virtuoso illustrates the many ways in which women don’t follow the stereotypes created for them... Moskovich’s second book is told with a sharp tongue and unusual charm, documenting the lives of a few explosive female characters."
—Jaylynn Korrell, Independent Book Review

"The prose poem-esque vignettes that make up the novel Virtuoso are propulsive and exact and Yelena Moskovich’s language oozes with sensory experience. Taking place in Prague, Paris, Wisconsin, Boston, and other locations, Virtuoso is a queer and transnational novel that hypnotically dunks the reader into every scene."
—Nate McNamara, Lit Hub '12 Books You Should Read in January'

"Readers have to trust Moskovich, as Virtuoso’s form is as carefully composed as its narrative. Virtuoso is compelling for this clever form as it makes readers question their current lucidity and the possibility of transcendental love... Moskovich’s novel spills-over with the nuances of existence (and by extension, co-existence), grounding readers in her dizzying and dreamlike story of love, friendship, and reconnection."
—Kaityln Yates, The Arkansas International

"The author’s inimitable style is both elegant and poetic. By story’s end, our characters’ lives amazingly, but not unbelievably, intertwine, skillfully arranged by Moskovich."
—Virginia Parobek, World Literature Today

"Virtuoso is a striking probe into feminine love and friendships, an examination of the dichotomy between the individual and the bleeding of self into other which occurs in relationships. It is an exploration of how to exist and find meaning in the unbalanced world we live in; a blurring, off-kilter study of the line between belonging and just plain longing."
—Beth Mowbray, Nerd Daily

"Moskovich’s dreamlike prose and fragmentation make the introduction of the surreal feel natural in the world she has painted for us."
—Hayley Neiling, Heavy Feather Review

"Moskovich writes with the eye of a film director and the lyricism of a poet..."
—Mallory Miller, Paperback Paris

"Virtuoso is novel in the most original sense, a slice of story carved out of the world and set in eerie, entrancing motion, a boundary-crossing narrative that encircles both geopolitical history and the delicate, gestural inner life of her two female characters, who form themselves in the midst of their homeland's upheaval. In Moskovich's inspired hands, language becomes a fragile and shifting musculature, a substance both firm and ephemeral, simultaneously the stuff of our lives and the stuff of dreams."
—Alexandra Kleeman, author of You Too Can Have a Body Like Mine

"Although Moskovich displays plenty of pyrotechnics—of structure, figure and storytelling—the title of her novel isn’t self-referential. She’s copped it from a (real) Czech-manufactured medical mattress for “high-risk patients.” As the company says, “when care is critical, each fibre counts.” And indeed, the author’s intricately woven the strands of two, or four, or perhaps six women’s lives into a text that holds them in an uncanny space for “accelerated wound healing.” Through rapturous and sometimes raucous somniloquies, in hotel suites, lesbian bars, and chat rooms, her scrappy, hungry, globe-scattered heroines are trying desperately to keep each other from coming to pieces. Part Ferrante, part Despentes, Yelena Moskovich is a brutal but tender-hearted chronicler of women in love."
—Barbara Browning, author of The Gift, I'm Trying to Reach You, The Correspondence Artist

“Like Moskovich's powerful debut The Natashas, this is a book about the last generation to be born in the Soviet era and how the fall of communism shaped their social, sexual and artistic engagement with the world... Moskovich's mother tongue is Ukrainian, and while her English is faultless, there's a pleasing otherness about her syntax and word choice, a sense that there are different languages operating just beneath the surface of the text. It makes for a reading experience that is always strikingly original... Virtuoso is a fine, fraught, strange novel... it will be fascinating to see what she writes next.”
—Alex Preston, The Guardian

"Virtuoso is powerfully mysterious and deeply insightful, a page-turner precisely because you have no idea what to expect. In the era of #MeToo, Moskovich’s arrestingly close and complicated view of lesbian relationships and female friendship seems more urgent than ever before. But it’s perhaps the novel’s defiantly surrealist style that is its greatest triumph; it is in itself a stirring endorsement of transgression on all fronts. Virtuoso has the effect of a good poem—inexplicit, mystifying, and sometimes impenetrable, but in the end producing a vivid and visceral impression of the subject. The true virtuoso, in both substance and style, is the author herself."
—Nadia Beard, Los Angeles Review of Books

"A hint of Lynch, a touch of Ferrante, the cruel absurdity of Antonin Artaud, the fierce candour of Anaïs Nin, the stylish languor of a Lana del Rey song... Moskovich writes sentences that lilt and slink, her plots developing as a slow seduction and then clouding like a smoke-filled room.”
—Shahidha Bari, The Guardian

"A bold feminist novel: it contains a world of love and friendship between women in which men and boys are both indistinct and irrelevant... The Natashas was a fascinating debut, Virtuoso is even better... It is the Blue Velvet to her Eraserhead: a fully realized vision of a strange world."
—Katharine Coldiron, Times Literary Supplement

Yelena Moskovich was born in Ukraine (former USSR) and emigrated to Wisconsin with her family as Jewish refugees in 1991. She studied theatre at Emerson College, Boston, and in France at the Lecoq School of Physical Theatre and Université Paris 8. Her plays and performances have been produced in the US, Canada, France, and Sweden. She has also written for Vogue, Frieze Magazine, The Paris Review, Times Literary Supplement, New Statesman, Happy Reader, Mixte Magazine, the Skirt Chronicles, and Dyke_on Magazine. She is the winner of the 2017 Galley Beggar Press Short Story Prize. In 2018, she served as a curator and exhibiting artist at the Los Angeles Queer Biennial. Her first novel The Natashas was published in 2016. She lives in Paris.

Enjoy a sneak peek of select pages from Virtuoso!