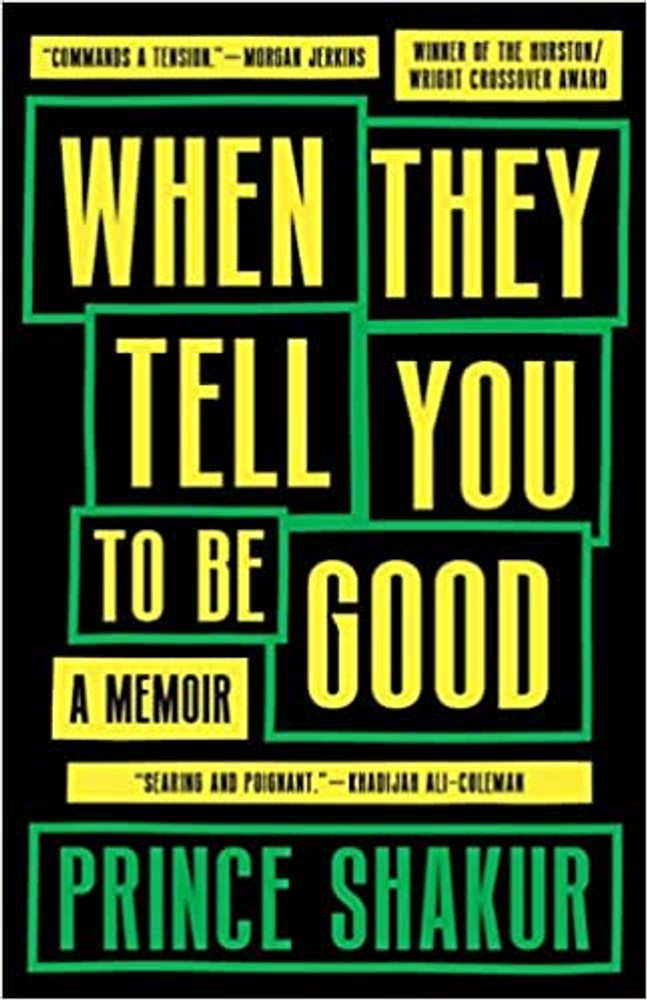 When They Tell You to Be Good

Join us for the book launch of When They Tell You To Be Good with author Prince Shakur and editor Hanif Abdurraqib, on Tuesday, October 4 at 8pm. Register for event.

A TIME Most Anticipated Book of Fall

Winner of the Hurston/Wright Crossover Award

Prince Shakur’s debut memoir brilliantly mines his radicalization and self-realization through examinations of place, childhood, queer identity, and a history of uprisings.

After immigrating from Jamaica to the United States, Prince Shakur’s family is rocked by the murder of Prince’s biological father in 1995. Behind the murder is a sordid family truth, scripted in the lines of a diary by an outlawed uncle hell-bent on avenging the murder of Prince’s father. As Shakur begins to unravel his family’s secrets, he must navigate the strenuous terrain of coming to terms with one’s inner self while confronting the steeped complexities of the Afro-diaspora.

When They Tell You to Be Good charts Shakur’s political coming of age from closeted queer kid in a Jamaican family to radicalized adult traveler, writer, and anarchist in Obama and Trump’s America. Shakur journeys from France to the Philippines, South Korea, and elsewhere to discover the depths of the Black experience, and engages in deep political questions while participating in movements like Black Lives Matter and Standing Rock. By the end, Shakur reckons with his identity, his family’s immigration, and the intergenerational impacts of patriarchal and colonial violence.

Examining a tangled web of race, trauma, and memory, When They Tell You to Be Good shines a light on what we all must ask of ourselves―to be more than what America envisions for the oppressed―as Shakur compels readers to take a closer, deeper look at the political world of young, Black, queer, and radical millennials today.

"A scorching, nonlinear journey through a Black man’s search for self."
― Kirkus Reviews

"Electric. . . . moving. . . . captivating. . . . A searing account of self-discovery in the face of structural oppression."
― Publishers Weekly

"An urgent and timely book that explores identity and breaking free of any expectations or limitations put upon us."
― Book Riot

"This memoir of trauma, identity, and race will move you. Move you to tears. Move you to action. Shakur’s exploration of self is revelatory. He is the voice for readers forgotten by publishing."
― Debutiful

"A story that combines so much―sociocultural criticism, religion, and politics while centering on the microcosm of one Jamaican family and the aftermath of two male relatives’ untimely deaths. . . . Commands a tension and doesn’t release you well after the last sentence."
― Morgan Jerkins, New York Times bestselling author of This Will Be My Undoing: Living at the Intersection of Black, Female, and Feminist in (White) America

"A daring coming-of-age memoir. . . . Shakur claims visionary thinkers and writers right alongside the people in his neighborhood, his family, friends, and comrades as his intellectual and emotional companions, establishing intimate, playful, heartbreaking, and powerful connections across all boundaries. I know we will be hearing much more from this irrepressible new literary voice."
― madeline ffitch

"As inspiring as it is detailed. . . . Intelligently explores the complicated yet straightforward relationship many men of all colors deal with: the subject of race."
― Zeke Thomas

"Shakur writes from a place of honesty that is both searing and poignant in its transparency. His story will resonate deeply for those who hold hidden stories of sadness and grief tightly behind a smiling public mask."
― Khadijah Ali-Coleman

"In When They Tell You to Be Good, Prince Shakur attempts to make sense of being born into, flung into, both the maw of American violence and the legendary lures and pressures of Babylon. While reckoning with the history of the murders of family members in Jamaica alongside the American state’s history of murdering its Black beings, Prince charts a path through his queerness, his family history, films, literature, the Black radical tradition, as well as his own twin cultures, until an activist, a rigorously-fought-for sense of morality, and the contours of a lucid self comes into view. This is how I’ve come to locate myself in time and space and legacy, Prince seems to say, while unraveling a map of his own life. With When They Tell You to Be Good’s evergreen pairing of both finesse and confidence, it’s miraculous to witness Prince assert that he is his own best cartographer."
― Bernard Ferguson

Prince Shakur is a queer, Jamaican-American freelance journalist, cultural essayist, and grassroots organizer with a BA in Creative Writing from Ohio University. His words have been featured in Teen Vogue, Catapult, Level, Electric Lit, and more. In addition, Shakur is the proud writer in residence at Sangam House, Twelve Arts, The Studios of Key West, and La Maison Baldwin. He is the host of the Creative Hour podcast and founder of Millennial Writer Life.