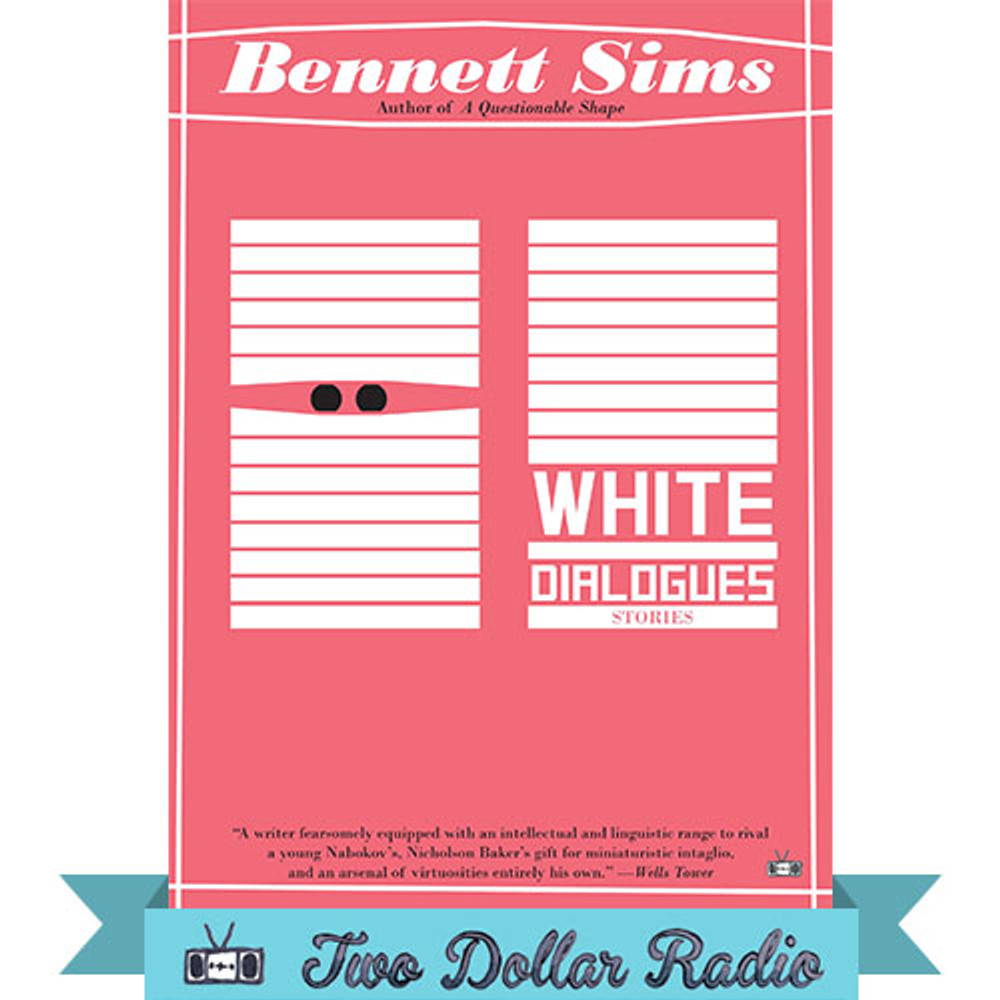 With all the brilliance, bravado, and wit of his award-winning debut, A Questionable Shape, Bennett Sims returns with an equally ambitious and wide-ranging collection of stories.

A house-sitter alone in a cabin in the woods comes to suspect that the cabin may need to be "unghosted." A raconteur watches as his personal story is rewritten on an episode of This American Life. And in the collection's title story, a Hitchcock scholar sitting in on a Vertigo lecture is gradually driven mad by his own theory of cinema.

In these eleven stories, Sims moves from slow-burn psychological horror to playful comedy, bringing us into the minds of people who are haunted by their environments, obsessions, and doubts. Told in electric, insightful prose, White Dialogues is a profound exploration of the way we uncover meaning in a complex, and sometimes terrifying, world. It showcases Sims's rare talent and confirms his reputation as one of the most exciting young writers at work today.

"A brilliant... story collection by possibly the smartest and most inventive writer of his... generation.
—Tony Tulathimutte, Bookforum, "Best Books of the Year"

"Sims’s debut story collection elegantly explores the ordinary and fantastic terrors lurking in the deepest recesses of the psyche... This is a cerebral collection for fans of smart, philosophical fiction that is not afraid to follow thought experiments to their most chilling conclusions."
—Publishers Weekly

“Anyone who admires such pyrotechnics of language will find 21st-century echoes of Edgar Allan Poe in Sims’s portraits of paranoia and delusion, with their zodiacal narrowing and the maddening tungsten spin of their narratives.”
—New York Times Book Review

"These 11 cerebral, uncanny stories marry horror, pop culture, metafiction, and cinema, and the result is a collection unlike any other in recent memory. If you like David Foster Wallace, Godzilla, or both, you need this book."
—The Week

"There are some clever literary stunts scattered throughout this collection, but there’s no doubting the inventiveness of the author’s prose, pacing, and ability to build tension and occasionally dispel it with laughter... A deft collection of spooky fables that pivots from classic stylings to postmodern irony."
—Kirkus

"Showcasing an ingenious and darkly subversive mind, White Dialogues is a head-trip worth taking."
—Shelf Awareness

"In this wise, witty and often deeply moving collection of stories Bennett Sims proves himself to be a master of many forms. He can find sinister obsession in a lawn mower or a scrabble board, he can find life and death in a lizard. He takes his reader to the moon—“Not even death is an outside for the dead”—and back. He is the heir to the Nabokov of Pale Fire even as his voice is entirely his own. The title story, “White Dialogues,” serves as an emblem for the book as a whole. Here is a writer who is always directing our attention to what we have failed to see, giving voice, beautifully, unnervingly to the unsaid."
—Margot Livesey

"White Dialogues is fantastic, and the story "Destroy All Monsters" is a masterpiece. Bennett Sims's work shows us—through the intricate decay of his characters, the intricate assembly of his monsters—why horror has become the most philosophical genre. He shows us the occult link between imagination and death."
—Michael Clune

"The brilliant, austere stories of White Dialogues are, in their marrow, horror stories: the terrible anxiety of thought loops, the certainty of fate, the specter of death, the inescapability of one’s own mind, the monstrosity of human impulses. With the uncanny perception of Nicholson Baker, the formal playfulness of David Foster Wallace, and the domestic terror of Shirley Jackson, Bennett Sims wrangles fictional forms, pop culture, and philosophy to his own dark ends. Incantatory, cerebral, and profoundly unnerving, White Dialogues is pure, perverse pleasure. Sims is one of our best early-career fiction writers, and this is a collection worth celebrating.”
—Carmen Maria Machado

"In White Dialogues, Bennett Sims unleashes more of the dazzling intellectual firepower I loved in his debut, A Questionable Shape. Sims' vision of what is horrifying is both engaged with the long and varied history of that genre and unique within it. His work is deeply philosophical and human, turning the known and familiar so that we can see it from new angles and find ourselves refracted in the strangeness of others' minds. Is Sims writing about monsters, or thoughts, or the monsters of our thoughts? This question—and this dark, uncanny collection of stories—feels vital, especially right now. A brutally smart book."
—V.V. Ganeshananthan

"The Zen poet Ikkyu used to run through town holding a human skull aloft like a lantern. These stories are that lantern, a collection of memento mori chilling, timeless, and deeply satisfying to read. There is no escape from the awareness of death here; in these stories, the hidden picture is always the monster in plain sight, the call is coming from inside the house, and the house is that circle whose center is everywhere and whose circumference is nowhere. The voices Sims summons are so persuasive that you, the reader, become implicated in their frantic logic, trapped with the narrators in their interpretative cages. This relentlessness is mitigated by the Melvillean heft of Sims’ prose: the depth of his attention to the world and to the making of sentences, the monumentalness. He is an anatomist of horror, but an anatomist of great beauty and wit."
—Amy Parker

Bennett Sims is the author of the novel A Questionable Shape, which received the Bard Fiction Prize and was a finalist for The Believer Book Award. He is a recipient of a Michener-Copernicus Society Fellowship. His fiction has appeared in A Public Space, Conjunctions, Electric Literature, Tin House, and Zoetrope: All-Story, as well as in the Pushcart Prize Anthology. He has taught at Bard College, Grinnell College, and the Iowa Writers’ Workshop.