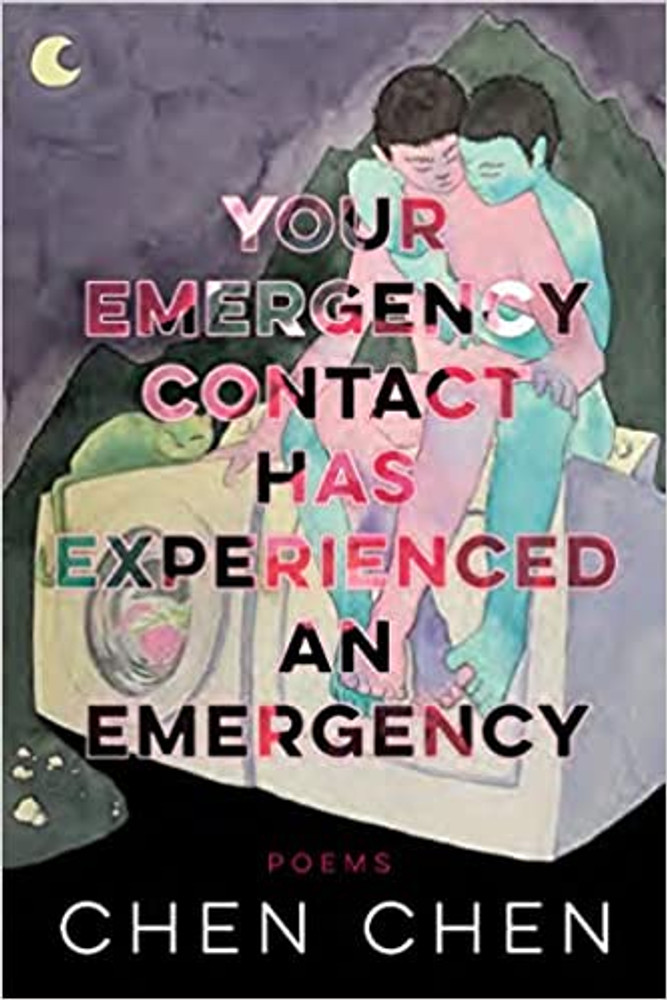 What happens when everything falls away, when those you call on in times of need are themselves calling out for rescue?

In his highly anticipated second collection, Chen Chen continues his investigation of family, both blood and chosen, examining what one inherits and what one invents, as a queer Asian American living through an era of Trump, mass shootings, and the COVID-19 pandemic. Always at work in the wrecked heart of this new collection is a switchboard operator, picking up and connecting calls. Raucous 2 a.m. prank calls. Whispered-in-a-classroom emergency calls. And sometimes, its pages record the dropping of a call, a failure or refusal to pick up. With irrepressible humor and play, these anarchic poems celebrate life, despite all that would crush aliveness.

Hybrid in form and set in New England, West Texas, and a landlocked province of China, among other places, Your Emergency Contact Has Experienced an Emergency refuses neat categorizations and pat answers. Instead, the book offers an insatiable curiosity about how it is we keep finding ways to hold onto one another.

“Chen Chen is one of my favorite poets writing today. His intuitive sense of humor makes me laugh out loud while reading his poems which brim with pathos. Humor cross-sections a heart, coating it with laughter while also ripping it in half. Parents, higher education, Sarah McLachlan, ice cream sandwiches, Backstreet Boys, all transform in Chen's poems to become the props that they always were. I also love how Chen's poems pay homage to other Asian American poets—Bhanu Kapil, Jennifer S. Cheng, Justin Chin, Marilyn Chin, and more. Whether he is writing about his partner, his mother, his dog, racism, the pastoral, homophobia, or academia, Chen continually reminds us how he has the writing skills to subvert everything, even himself. With long-lined poems, prose poems, tercets, and more, here is a poet who isn't afraid to become fluent in forms. Ultimately, Chen's poems are honest, without the performative film that layers so much today, and his poems leave me speechless and transformed.”

“These poems can do so much, they can tell you, for example, ‘what bees wear at night / when they want to feel sexy,’ these poems can be hilarious, even when grieving. These poems remember they are written in the late empire, inside this grief that is America of the early 2020s, and somehow these poems also console with all the things that grackles bring. Anyone who has a boyfriend or a mother should read these poems. Anyone who’s ever been made uncomfortable in this country in public or in private should read them, too. Anyone who likes to laugh out loud and then realize that they have learned something far more than a joke: that they are wiser from reading the lines: read these poems. Chen Chen is as real as poets can be.”

— Ilya Kaminsky, author of Deaf Republic and Dancing in Odessa

"With humor, deep intelligence, and what feels to me like a luminous everyday philosophy, Chen Chen leads me 'through the wound of it.' It being life. In America. In the 21st Century. In a body touched by violence and care, grief and desire, hope and heavy knowledge. Your Emergency Contact Has Experienced an Emergency is dolorous, riotous, rapturous."

Chen Chen was born in Xiamen, China and has lived in Western Massachusetts, Upstate New York, and West Texas. His debut poetry collection, When I Grow Up I Want to Be a List of Further Possibilities (BOA Editions, 2017), was long-listed for the National Book Award and won the A. Poulin Jr. Poetry Prize, the Thom Gunn Award, the GLCA New Writers Award, and the Texas League of Writers’ Book Award. In 2019, Bloodaxe Books published the UK edition. He is also the author of a collection of essays, In Cahoots with the Rabbit God (Noemi Press, forthcoming 2023), and he has written four chapbooks, most recently GESUNDHEIT! (Glass Poetry Press, 2019), a collaboration with Sam Herschel Wein. Chen’s work appears in three editions of The Best American Poetry, and his poems have been translated into French, Greek, Russian, and Spanish. He has received two Pushcart Prizes and fellowships from Kundiman and the National Endowment for the Arts. He holds an MFA from Syracuse University and a PhD from Texas Tech University. He teaches at Brandeis University as the Jacob Ziskind Poet-in-Residence. He also serves on the poetry faculty for the low-residency MFA programs at New England College and Stonecoast. He edits the Twitter-based journal the lickety~split and with a brilliant team, he edits Underblong. He lives with his partner, Jeff Gilbert, and their pug, Mr. Rupert Giles.

In Case of Emergency