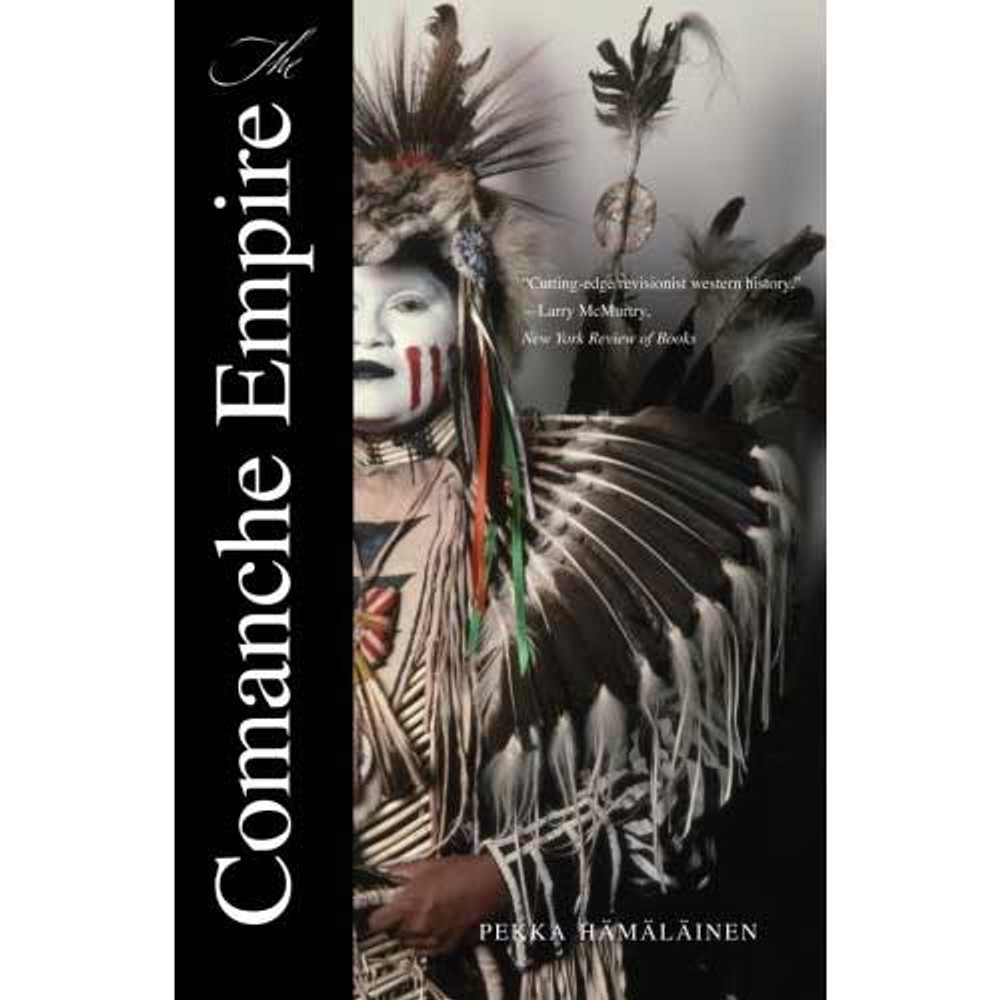 In the eighteenth and early nineteenth centuries, a Native American empire rose to dominate the fiercely contested lands of the American Southwest, the southern Great Plains, and northern Mexico. This powerful empire, built by the Comanche Indians, eclipsed its various European rivals in military prowess, political prestige, economic power, commercial reach, and cultural influence. Yet, until now, the Comanche empire has gone unrecognized in American history.

This compelling and original book uncovers the lost story of the Comanches. It is a story that challenges the idea of indigenous peoples as victims of European expansion and offers a new model for the history of colonial expansion, colonial frontiers, and Native-European relations in North America and elsewhere. Pekka Hämäläinen shows in vivid detail how the Comanches built their unique empire and resisted European colonization, and why they fell to defeat in 1875. With extensive knowledge and deep insight, the author brings into clear relief the Comanches’ remarkable impact on the trajectory of history.

"This comprehensive history of the Comanche people treats them as an independent power rather than as victims of American westward expansion. And though Hamalainen frames his arguments within scholars' debates on proper perspectives toward the Comanche, general readers interested in the history of the Southwest will discover his to be a fascinatingly informative volume in its explanatory and narrative modes. . . . A valuable library resource for its subject."―Booklist


"The Comanche Empire is a hugely important documentary survey of the Comanche Nation, as known from documentary sources between the late 17th and the late 19th centuries. . . . By removing the anthropology, material culture, and social history from this study of the Comanche, the author finds room to plunge deeply into the political archives of the time and tell the reader how Comancheria functioned as the midcontinental power brokers of the 1700s and 1800s."―Ed Baker, The Austin Chronicle


"A fascinating new book, details [the Comanches] unusual and colorful history. . . . Hämäläinen writes well and his narrative has an infectious verve and flow. . . . His broad themes are never in doubt, and the evidence he marshals is both compelling and convincing. He has rescued the Comanches from myth and distortion and given them their due in the sprawling epic that is our American story."―John Sledge, Mobile Press-Register (AL)


"A fascinating new book, details [the Comanches] unusual and colorful history. . . . [Hämäläinen] has rescued the Comanches from myth and distortion and given them their due in the sprawling epic that is our American story."—John Sledge, Mobile Press-Register (AL)


"Comanche Empire is an impressive, well-written, and important study that should significantly influence future metanarratives, whether they include all or parts of Texas, the West, the Borderlands, or even general histories of the United States and Mexico."―Ty Cashion, Journal of Military History


"Hämäläinen's treatment of the complex relationships between the Comanches and other European and Native American societies is unique . . . Hämäläinen collates and narrates the events of the eastern and western frontiers through time in such an effective manner that the reader is swept in the flow of an almost seamless narrative."―Mariah F. Wade, Great Plains Quarterly


"The Comanche Empire is the best book anyone has written about the Comanche Indians of the southern plains. For many readers, it will be an eye-opener because of its vigorously advanced argument that for much of the eighteenth and nineteenth centuries the Comanches created a mid-continental empire that controlled the economy of a huge part of the West, turned the northern Spanish and Mexican territories into its colonial appendages, and dominated the geopolitics of the both the Republic of Texas and, for a time, the United States in their imperial designs on the Southwest. If you are unused to thinking of American Indians as having this kind of agency in western history, The Comanche Empire will rearrange the furniture in your head."―Dan Flores, Montana: The Magazine of Western History

"Perhaps we can simply stipulate that The Comanche Empire is an exceptional book—in fact, one of the finest pieces of scholarship that I have read in years. . . . Hämäläinen has given us a closely argued, finely wrought, intensely challenging book."—Joshua Piker, William and Mary Quarterly

"The Comanche Empire connects 'the West,' understood by American historians to mean the trans-Mississippi Western United States, with 'the West' as understood by world historians, through the materialist lens of world systems theory. What emerges is formerly unthinkable: a world of 'reversed colonialism' in which the Comanche consciously created a functional empire by exploiting and controlling a huge geographic area and the several Euroamerican states that contested for it. . . . The construction and maintenance of this empire by the Comanche and their sometimes surprising allies, and its Carthaginian destruction by the massed might of US forces, form a grand narrative, convincingly told."—John Harley Gow, Canadian Journal of History/Annales canadiennes d'histoire


"The Comanche Empire offers an acute analysis of the rise of the Comanche power."—Jeffrey Ostler, Western Historical Quarterly


"This book deserves all the accolades it has and will receive. It is certain to be on reading lists for years to come."—William J. Bauer, Jr., Journal of World History


Co-winner of the 2009 Merle Curti Award, presented by the Organization of American Historians


Received Honorable Mention for the 2008 PROSE Award in the U.S. History and Biography/Autobiography category, sponsored by the Association of American Publishers


Gold medal winner of the 2008 Book of the Year Award in the category of History, presented by ForeWord magazine


"The Comanche Empire is a landmark study that will make readers see the history of southwestern America in an entirely new way."—David J. Weber, author of Bárbaros: Spaniards and Their Savages in the Age of Enlightenment

"This exhilarating book is not just a pleasure to read; important and challenging ideas circulate through it and compel attention. It is a nuanced account of the complex social, cultural, and biological interactions that the acquisition of the horse unleashed in North America, and a brilliant analysis of a Comanche social formation that dominated the Southern Plains. Parts of the book will be controversial, but the book as a whole is a tour de force."—Richard White, author of The Middle Ground: Indians, Empires, and Republics in the Great Lakes Region, 1650-1815

"The Comanche Empire is an impressive achievement. That a major Native power emerged and dominated the interior of the continent compels a re-thinking of well worn narratives about colonial America and westward expansion, about the relative power of European and Native societies, and about the directions of change. The book makes a major contribution to Native American history and challenges our understanding of the ways in which American history unfolded."—Colin G. Calloway, author of One Vast Winter Count: The Native American West before Lewis and Clark

"Hämäläinen not only puts Native Americans back into the story but also gives them—particularly the Comanche—recognition as major historical players who shaped events and outcomes."—Sherry Smith, Southern Methodist University, author of Reimagining Indians: Native Americans Through Anglo Eyes, 1880-1940

Nollywood: The Making of a Film Empire