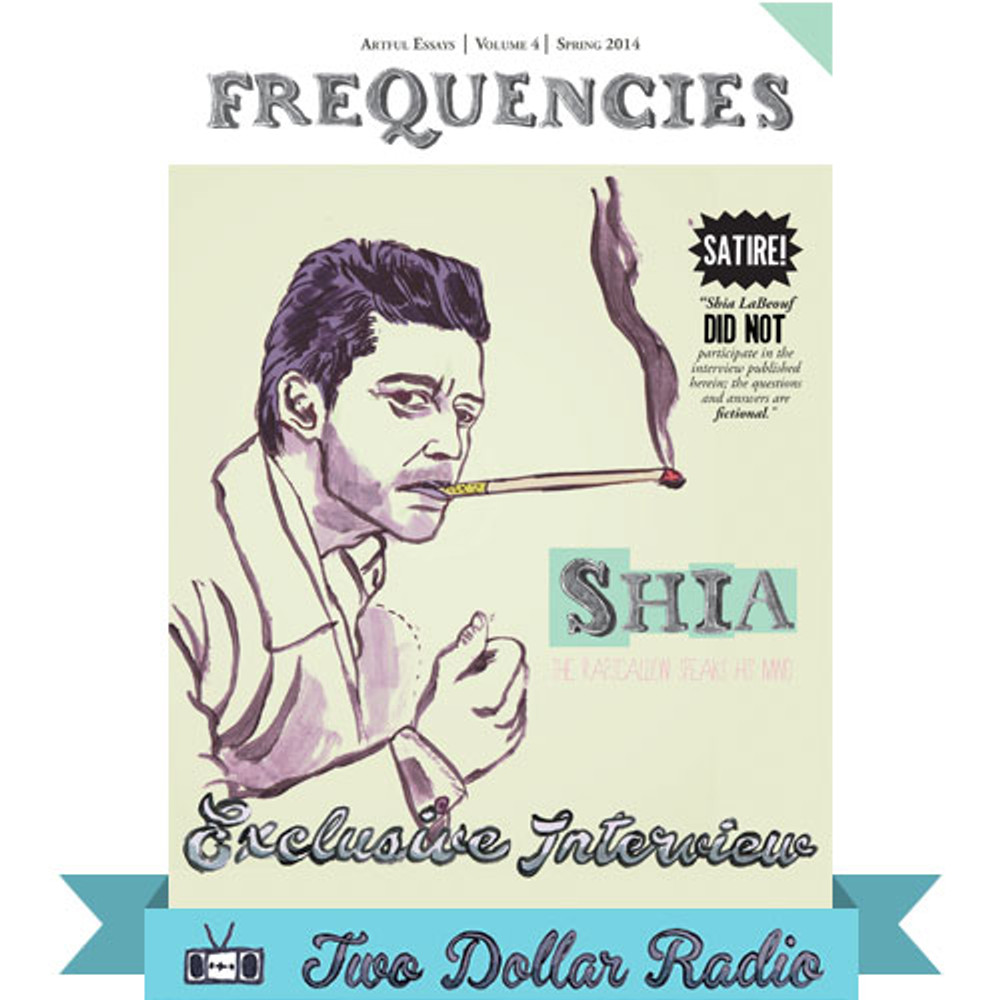 This it it! The final installment of Frequencies. (For now!) The issue that forced us to explain the meaning of "satire" to perhaps the world's most famous plagiarist (who will remain nameless).

The fourth issue of Frequencies features a moving essay by Colin Asher—who penned an incredible tribute to Nelson Algren in The Believer which landed the writer a book deal with Norton—about the contradictions in life and in wanting to help others, as he works at a halfway house in San Francisco's Mission District.

Ruth Gila Berger delivers a transformative and always topical essay on the evolution of the new American family and the urgent need to confront the past.

Charles Hastings, Jr., writes an eloquent dispatch from a factory in Alabama, crushing unsold DVDs and CDs, as he struggles everyday to define his life's purpose and find for himself something he might consider to be a noble toil.

We were all teenagers once! Nathan Knapp writes about life as part of the first generation of teenagers seeking love and a sense of belonging on the Internet, during the early days of dial-up.

Also included in this issue is an excerpt from Joshua Mohr's hotly-anticipated memoir, Sirens! The book will be the first work of non-fiction by the acclaimed novelist. This excerpt sees Mohr driving to Reno on acid, and while his friend is in jail for a reason none in their group can discern, scoring drugs from a mother, forcing Mohr to reflect on his past and the strange men he was left with by his own mother.

EXCLUSIVE: An exclusive satirical (fictional!) interview with Shia LaBeouf, in which the rapscallion speaks his mind!

Nicholas Rombes is author of CINEMA IN THE DIGITAL AGE and RAMONES, from the 33 1/3 series. He writes for The Rumpus and FILMMAKER MAGAZINE, where he is a contributing editor. His work has appeared in THE BELIEVER, 3:AM MAGAZINE, and other places. He can be found at thehappinessengine.net.

Nathan Knapp has had work published by HTMLgiant, elimae, The Boiler, The Fiddleback, and others. He is currently pursuing an MFA in creative writing at Oklahoma State University and am the editor of The Collapsar, a new lit magazine.

Ruth Gila Berger has been published in Chelsea Review, Creative Nonfiction, Emrys Journal, Great River Review, GSU Review, Gulf Coast and Water~Stone. Ruth's list of finalist commendations is long and storied, the last one being from Arts & Letters for their 2012 Nonfiction Award. Beyond that, life is simple. Ruth lives in Minneapolis and works in the publishing industry. "Now. Here. Crazy. But. Still" is one piece of an almost finished memoir.

Erick Lyle is a writer, musician, activist, and zine editor. Born in Orlando, FL, Erick grew up in South Florida, and has lived in Miami, Richmond, VA; Little Rock, AR; Eureka, CA; Chattanooga, TN; New Orleans, LA; and Berkeley, CA. He is the author of On the Lower Frequencies and the acclaimed zine, Scam.